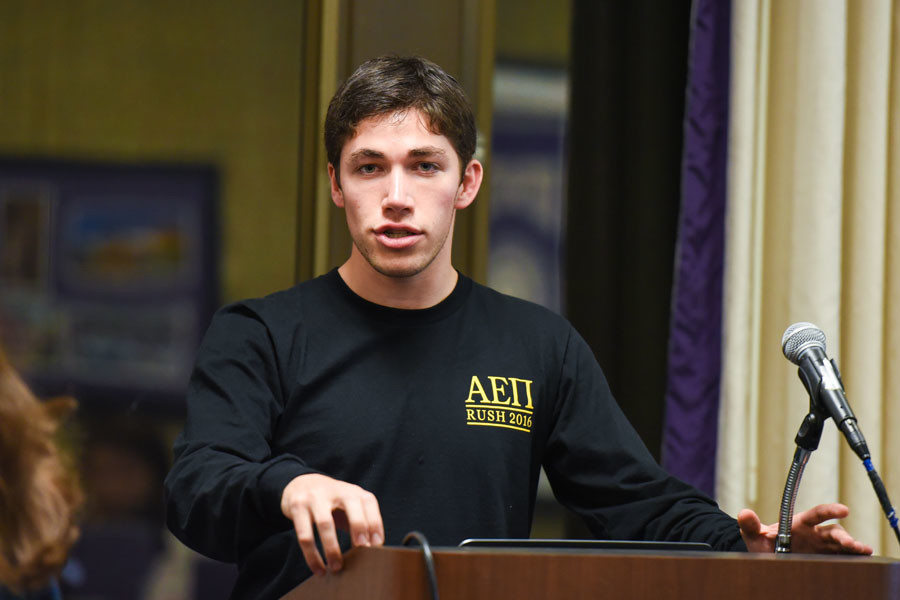 Weinberg senior Jonathan Kamel speaks in favor of a resolution that asks administrators to allow students with medical marijuana cards to consume smokeless forms of the drug in University housing. The resolution passed Senate nearly unanimously.

“We’re not legalizing weed,” he said. “It’s very much targeted for this specific legislation, and we feel that it will help students in the long run.”

The resolution asks the University to allow students with state-issued medical marijuana cards to use non-smokable forms of the drug — such as through a vaporizer or an edible — in on-campus housing.

Naughton, co-president of Students for Sensible Drug Policy, said no other school has made such a change, mostly due to a federal law that ties universities’ federal funding to administrators’ ability to keep campus “drug-free.”

But Naughton said during last week’s Senate that the University already allows students to use other drugs such as Xanax and Adderall in NU housing.

“There are already other controlled substances that we allow on campus,” she said Wednesday. “This resolution is about letting students take their medicine.”

Kamel acknowledged that it’s unlikely administrators will act on the resolution. Still, he said Senate should pass it even if it’s unlikely it will change policy.

“The symbolic notion that we’re paying attention to this issue is very important,” he said. “I don’t think it’s fair that just because the University won’t adopt this policy we shouldn’t pass this bill, because we should stand up for what we believe as students.”

A dispensary is scheduled to open in Evanston in November.

Earlier in the meeting, Weinberg senior Scott Spicer was elected parliamentarian. Spicer was the only candidate nominated for the position.

Spicer’s background as a linguistics major qualifies him for the job, he said.

“That gives me a real good feel for the formalities of language,” he said. “Especially with technical writing, which is what legislation is.”

The parliamentarian, first in line to the speaker, calls roll and chairs the rules committee, the group of students who help develop language for proposed legislation.

McCormick sophomore Eliott Sassouni, SESP freshman Ben Powell and Weinberg freshmen Joanne Huang and Justine Kim were elected to the rules committee. They were the only nominees for the four committee seats.