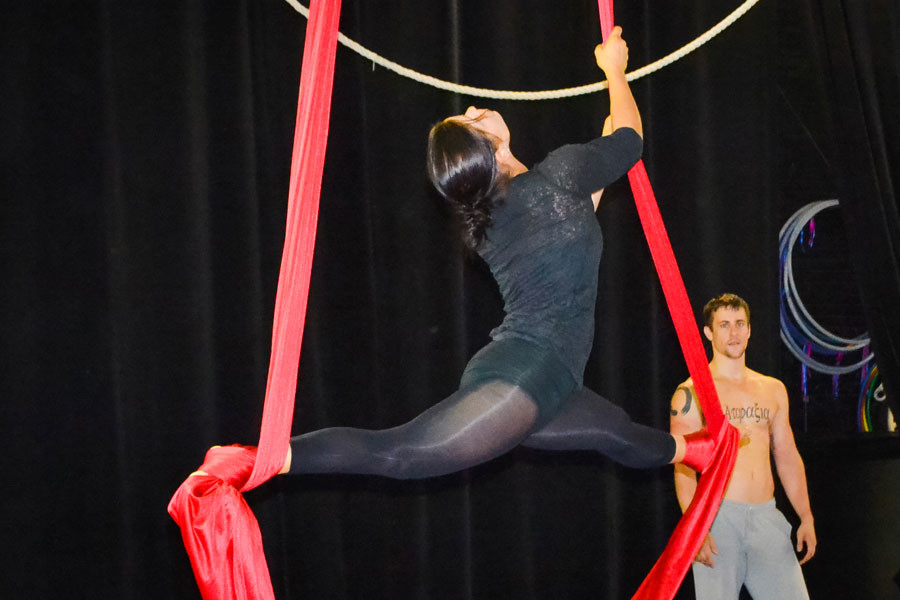 A student in The Professional Circus Training program practices silks during open gym time. The Actors Gymnasium launched the program this year to give performers a background in circus and theater.

In a building less than five blocks from Northwestern, 11 performers swing from silks, balance on each other’s contorted bodies and swing hula hoops from their chins.

These performers are a group of contortionists, acrobats and dancers participating in The Actors Gymnasium’s first ever Professional Circus Training Program, where they receive nine months of training to become professional circus performers.

Through the program, students work with some of the best circus professionals in the Chicago area, then perform the skills they’ve learned in a showcase at the end of the program.

“Chicago is a great place to study circus because it is one of the greatest circus cities in the country,” said Michelle Higgins, marketing manager for The Actors Gymnasium. “That’s because there’s a lot of other training programs in the area and more shows that are happening, and there’s a greater awareness of circus as an art form.”

When The Actors Gymnasium first opened 20 years ago, it was intended to be a place for actors to learn circus skills to enhance their performances. However, there was a gap between the experience that students received from The Actors Gymnasium and the competitiveness of the circus world.

The Professional Circus Training Program, which launched last month, is the company’s attempt to bridge that gap, Higgins said.

“It’s a really incredible opportunity for the students because a lot of students who want to pursue circus, they have to cobble lessons from this organization and this organization,” Higgins said. “It’s great that we house it in one place.”

After releasing information on the program last January, the company received a huge amount of interest, Higgins said. It received applications from all over the world, but accepted fewer than half of the applicants, she said.

Joe Yonek, one of the students in the program, said the small number of participants adds to the program’s community. He has previously organized acroyoga programs, a combination of yoga and partner acrobatics, that have had up to 150 participants.

The small group size also allows for more focused instruction for the performers and more collaboration. Rather than being grouped only with people focusing on the same apparatus, students can collaborate with others across disciplines to see how their skillsets fit together.

“The program’s emphasis on collaboration and mutual exploration is completely new to me,” said Brendan Lewis, another student in the program. “The Actors Gymnasium tries to capitalize on the amalgamation of the different talents.”

Students have been able to try out different circus-related styles, including trapeze, silks, tumbling and unicycling. This provides them a strong foundation in a variety of circus skills, rather than just one specialty, Higgins said.

“We’re going to provide everyone with well-rounded circus skills,” Higgins said. “If you’re interested in trapeze, there might not be that many trapeze gigs. If you know many different things, you’re more likely to get hired.”

Yonek said he’s glad he has the opportunity to broaden his circus skillset, rather than focusing on just partner acrobatics, like he did in the past. Had Yonek not done the circus training program, he never would have considered training tumbling and aerial skills, he said.

Similarly, Lewis has had the opportunity to work with contortionists, which contrasts his background in aerial straps and the gymnastics ring.

“If forces us to step outside of our comfort zone,” he said. “We’re trying to develop a skillset so the group as a whole has a great vocabulary. Those of us who focus on strength building may not have a theater background. So when I’m called upon to act, I’m developing those theater muscles.”

The program provides dance and theater instruction. Instructors from the Lookingglass Theater ensemble also teach students to add theater and acting to their circus performance.

Yonek wanted to learn more about circus beyond the tricks.

“I signed up for this program because it’s not just about doing the tricks,” Yonek said. “A big part of the program is you use circus skills to tell a narrative. When I get onstage, it’s usually about doing tricks, but I want to do something more creative.”

Once students develop a strong foundation in circus and performance, they will choose a specific apparatus to major in within the program. They will receive private instruction specific to their major to become professionals in that apparatus.

Students also receive instruction on how to market themselves in the competitive circus world, and learn the business of becoming a circus performer. After completion of the program, students will be able to audition for professional circus companies, such as Cirque du Soleil, Higgins said.

“There’s something physically challenging and creatively challenging about circus,” Higgins said. “You can tell stories through the physicality of circus that is hard to put into words.”