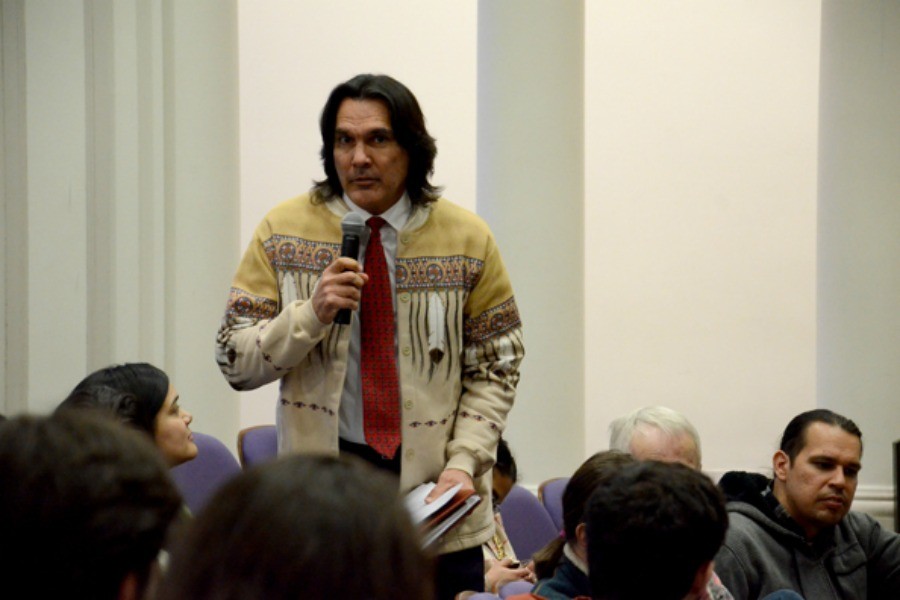 Andrew Johnson, executive director of the American Indian Center of Chicago, speaks at the Native and Indigenous Northwestern Community Forum in March 2014. The University announced that an Indigenous Studies Research Initiative will replace the Native American Outreach and Inclusion Task Force’s 2014 proposal for an Indigenous Research Center.

The University will not move forward with the Native American Outreach and Inclusion Task Force’s 2014 recommendation for an Indigenous Research Center and instead will launch an Indigenous Studies Research Initiative led by the Weinberg College of Arts and Sciences.

The initiative will replace the proposed Indigenous Research Center despite Northwestern reserving funds in February to create the center. University spokesman Al Cubbage said the money will now fund the new initiative.

The University’s goal is to establish a flexible structure for scholars to thrive in an effort to create a supportive intellectual community centered on indigenous studies, said Weinberg Dean Adrian Randolph in an email to faculty members last week.

Provost Dan Linzer told The Daily the initiative’s structure will allow the University to give flexibility to faculty.

“If you construct something and then try to fill it with the right people, that constrains how you create something here,” Linzer said. “If you go after good people and then give them the flexibility to think about how best to organize their activities, then they take ownership of it.”

SESP senior Forrest Bruce, co-president of the Native American and Indigenous Student Alliance, said he is glad the University is committing to bring indigenous faculty to campus. However, Bruce said he worries about the vague language in Randolph’s email and is unsure how committed NU is to the announced initiative.

“As long as they get all the faculty over here, I think that will get the ball rolling on making more than just an initiative,” Bruce said.

The University will launch searches for two junior faculty members, one in the area of social disparities and one in the area of creativity, history and cultural expression, Randolph said in his email. A search committee from the Institute for Policy Research will guide the hiring process for the first position. The Kaplan Institute for the Humanities will lead the search for the second position.

“Finally, we will challenge departments to identify talented, tenured colleagues outside the University who might consider joining the Northwestern faculty as a leader of this initiative,” he said in the email.

“The purpose of this initiative is to build a critical mass of scholars working in the field of Indigenous Studies broadly construed,” Randolph said.

Linzer told The Daily he is excited about the University’s steps toward Native American and indigenous inclusion. He said Randolph, who began his position at NU in July, came with his own perspective and background from Dartmouth College, an institution with a long history of Native American programs.

“He brought a very useful frame of reference to think about what we could do here,” Linzer said.

Although the University is making progress in its Native American and indigenous inclusion efforts, Bruce said a center for indigenous studies would be a more concrete step in that direction. He added that NAISA will continue to hold the University accountable.

“We plan on staying really vocal on campus and making sure that the University doesn’t forget about the task force and its recommendations and the institution’s obligation to fulfilling those recommendations,” Bruce said.