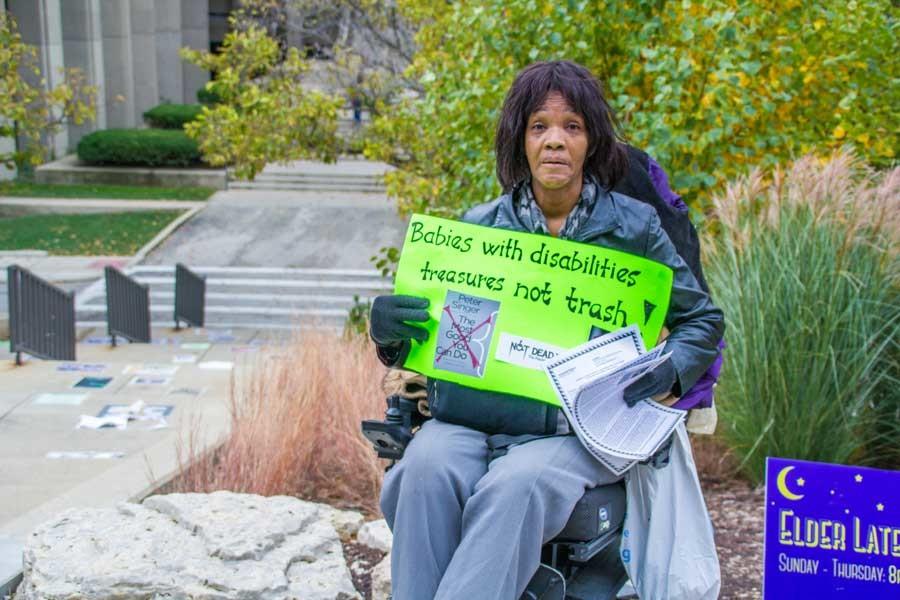 Shelley Barry protests outside a talk by Princeton Prof. Peter Singer, who in the past has advocated for euthanizing disabled babies. Singer arrived at NU on Saturday as a speaker for the Chicago Humanities Festival and was met by a group of protesters outside Norris University Center.

Demonstrators lined up outside Norris University Center on Saturday to protest Princeton philosopher Peter Singer, who spoke on effective altruism and animal equality for the 26th annual Chicago Humanities Festival.

Singer, a bioethics professor at Princeton University, is a utilitarian philosopher who approaches issues from a secular viewpoint. But it wasn’t Singer’s stance on animal rights or charitable giving that prompted the protests; it was the contention made in his books that severely disabled babies should be euthanized, a topic not covered in his speech.

“Everybody is entitled to human life,” said Michael Grice, a quadriplegic and longtime disability rights activist. “Even if I was 5 months old, just a newborn, why would you say that I should be killed?”

Grice was joined by more than 10 other people — many of whom were disabled — boycotting the event. The protest was led by Access Living, a Chicago-based disability rights and services organization.

Speaking to a sold-out audience of more than 350 people on Saturday, Singer laid out the framework for his arguments.

“We ought to be living so that at least a significant part of what we do is concerned with making the world a better place,” he said. “Why do less good than we could?”

Most of the lecture was dedicated to “effective altruism,” an evidence-based method of charity popularized by a TED talk Singer gave in 2013. At one point, Singer proposed working on Wall Street rather than at a charity, because, he said, making more money means making a bigger difference.

In his speech, Singer also criticized a number of philanthropists and organizations for supporting the arts, including the very group that brought him to Northwestern.

“It’s great that there are cultural festivals and events,” he said. “But I do feel that if there are over 6 million kids dying from preventable poverty-related diseases that seems to be more critical. If somebody asked me to donate to this festival, I would say: ‘I’m sorry, that’s not where my priorities lie.’”

Singer concluded the session by encouraging people to become effective altruists to “increase our own feeling good about ourselves.”

Amber Smock, director of advocacy for Access Living, said she doesn’t think Singer should be allowed to publish his ideas about euthanizing disabled babies anywhere.

“You run the risk of NU and Chicago Humanities Festival appearing to endorse Dr. Singer’s positions by allowing him to perform here,” she said.

Dubbed the “most influential” philosopher alive by The New Yorker, Singer’s impact on the world of bioethics has been transformative. His 1979 book, “Practical Ethics,” tackled contentious issues like race, abortion and euthanasia and served as the foundation for applied ethics. Since then, Singer has written more than 10 books, including his latest, “The Most Good You Can Do.”

Among philosophers there is sharp disagreement over Singer’s ideologies, which take a staunchly utilitarian outlook on life.

“His view is that (friends and family) should receive no direct priority,” said philosophy Prof. Richard Kraut, who attended the talk. “I side with common sense here. I think that I should do more for my children than somebody else’s children.”

But, Kraut said, he is less certain about some of Singer’s other ideas. For Kraut, the decision to terminate a child’s life should be primarily circumstantial.

After the event ended and Singer had finished signing books, an activist and her 26-year-old daughter walked up to him and initiated a conversation.

“I’m a mom, and I quit my profession to make sure Sarah had a good life,” said Deb Hamilton, a 53-year-old former teacher from Batavia, Illinois, whose daughter has multiple disabilities. “The concept of sweeping her away, or anyone like her, is personal for me.”

Singer later told The Daily that though protesters don’t confront him often, it has happened before.

“Parents ought to have choices if they give birth to a child with a very severe disability about whether that child lives or not,” he said to Hamilton.

The exchange was similar to one he had in 2001 with former disability rights activist Harriet McBryde Johnson at the College of Charleston, chronicled in a 2003 article in The New York Times magazine. When asked about Johnson, Singer said she helped expand his horizons.

“I accepted that maybe the lives of people with disabilities can be better than I had thought,” he told The Daily. “And certainly I think that Harriet was leading a rich and full life. But it is going to vary a lot with circumstances.”

Singer, who said he stands by his former work, is ready to move on.

“I want to find new and interesting things to say,” he told The Daily. “I wrote about the disability movement in the ’80s. It is a very specific problem that affects a very small number of people. The effective altruism movement has a lot more potential to do good.”

The photo caption accompanying this story was updated Oct. 26 at 2:33 p.m. to include the pictured woman’s name.