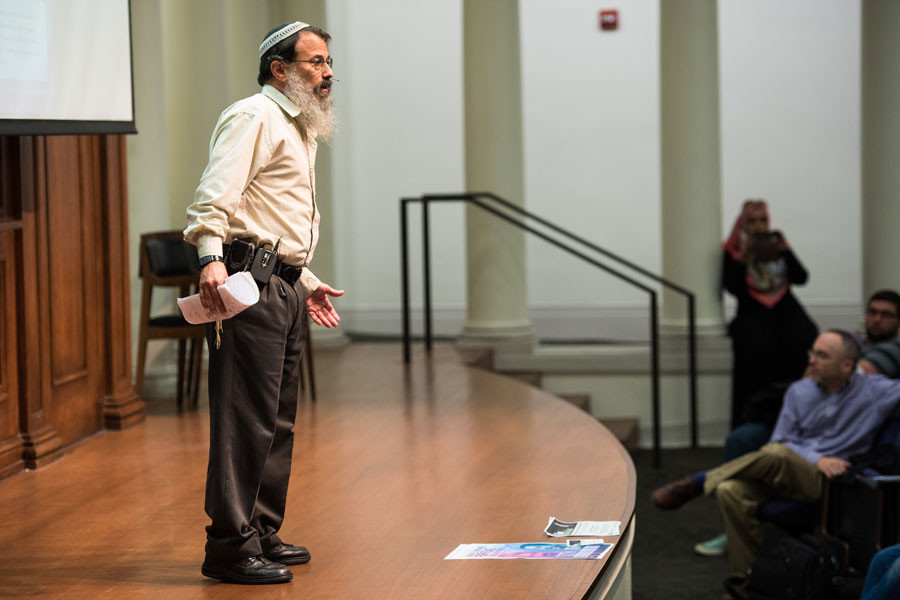 Rabbi Hanan Schlesinger discussed how the path forward in the Israeli-Palestinian conflict is a nonviolent national “revolution.” Schlesinger and Ali Abu Awwad hope to educate Israelis and Palestinians through Roots, a peace movement.

For Rabbi Hanan Schlesinger and Ali Abu Awwad, the path to peace between Israelis and Palestinians lies in a nonviolent national “revolution,” which they hope to create through a grassroots movement educating both sides on reconciliation.

As part of a U.S. speaking tour, Schlesinger and Awwad spoke Wednesday to more than 80 Northwestern students and community members in light of escalating violence in Israel. The two unlikely partners head Roots, their grassroots organization that promotes nonviolence between Israelis and Palestinians.

According to The Washington Post, eight Israelis have been killed by Palestinians this month, and 34 Palestinians were killed by Israeli troops — 17 of whom Israel designated as attackers. Recent violence also includes the murders of Israelis Naama and Eitam Henkin, whom Schlesinger knew personally.

“I have a need to speak,” Schlesinger said. “Speaking is cathartic, it’s therapeutic, and I have so much pain. … I need a place to put that pain.”

Their organization, Roots, operates in the Gush Etzion area of the West Bank and brings international visitors, local Israelis and Palestinians, as well as members of the Israeli military to meet each other and learn about reconciliation.

The event was hosted by the NU Office of Religious and Spiritual Life. Brooks Robinson, who is interning as a chaplain with the University ministry, said the dialogue at the event left him feeling hopeful.

“I have hope because there’s something concrete on the ground that’s different and seems to be a look into the right direction,” he said.

Both Schlesinger and Awwad shared personal stories through which they illustrated how the separation between Israelis and Palestinians in the West Bank not only physically divides the two peoples, but perpetuates the existence of two national narratives.

Schlesinger, an Orthodox Jewish settler living in the West Bank, described making “aliyah” — immigrating to Israel from the Jewish Diaspora — due to his faith. He said the power of his religious narrative — “his truth” — blinded him to the story of the Palestinians.

“The Palestinians have been there for hundreds of years while we had been in exile, and when we returned we didn’t see that there was somebody else there,” Schlesinger said. “We saw an empty land waiting for us to conquer it, waiting for us to fulfill the vision of our people, waiting for us to create a refuge for the harassed and persecuted Jewish people.”

A Palestinian activist and author, Awwad described his upbringing in a highly political Palestinian family and how he eventually participated in the First Intifada — a popular and violent Palestinian uprising — in 1987, which landed him and his mother in jail.

While imprisoned, Awwad said he learned the value of nonviolent resistance from older political prisoners but that it wasn’t until the Israelis denied him permission to visit his mother in prison that he was convinced and the two began a 17-day hunger strike until the Israelis relented. In 2001, his mother set up a meeting between Palestinians and Israelis who had lost loved ones in the conflict, something which he said changed his perspective on his “enemy.”

However, both Awwad and Schlesinger acknowledged fear, anger and grief can make pursuing nonviolence difficult, describing the Israelis and Palestinians as “traumatized peoples.”

Representing opposing and often conflicting perspectives, Awwad and Schlesinger did not pretend to agree on most things, noting their key divide over the legitimacy of Israeli settlements in the West Bank. However, both said overcoming their disagreements and being able to accept and legitimize each other’s narrative reveals a path toward peace.

The two said their nonviolent, national movement would find strong support from the Israeli left-wing and is the Palestinians’ best chance at achieving independence.