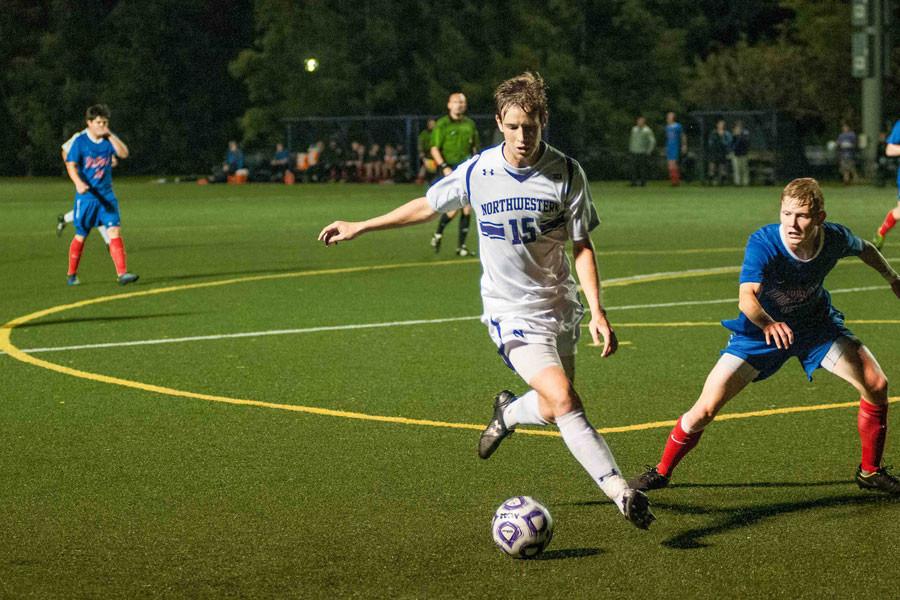 Senior midfielder Cole Missimo gains control of the ball. Missimo and his fellow seniors are being looked upon to lead the Cats as the season comes to a close.

It was a very long night at Toyota Park, and in the end nothing separated the two teams on the scoreboard.

Notre Dame (8-2-5, 3-1-2 ACC) had no trouble creating space and open shots all night, but it had a much tougher time finding the back of the net. Northwestern (5-6-2, 2-3-0 Big Ten) struggled to create shots, although that didn’t stop it from gritting out an impressive double overtime 1-1 draw.

The Wildcats, save for the occasional counter, appeared to be offensively outmatched by the eighth ranked Fighting Irish.

Six minutes into the game, Notre Dame had six shots. A minute later the team had its first goal, courtesy of a blast from forward Jon Gallagher. It seemed that the game was quickly getting out of hand.

That very well may have been the case if not for the terrific play of Cats senior goalkeeper Zak Allen.

Allen saved more shots (12) than NU attempted on offense (7). The ball remained in the Cats’ defensive third almost the entire evening, with the Fighting Irish finishing with 39 shot attempts — the most shots attempted by Notre Dame in more than 20 seasons.

To put that into perspective, that is as many shots as NU averages over a period of more than four games.

This is not to say that NU played poor defense. In fact, of the 39 shots only 12 were put on goal. The Cats were continuously well set defensively, putting bodies in front of goal and ensuring that the Fighting Irish did not pull away.

More importantly, Allen’s great play meant the Fighting Irish’s first goal would also be their last, and despite a deep disparity in play the Cats knew that despite it all, they were only trailing by a single goal heading into halftime.

All of Notre Dame’s possession in the attacking third left them open to a counter, and it was on such a counter that NU was able to level.

In the 58th minute, senior forward Joey Calistri, who was seemingly everywhere throughout this game, laid a ball across to the right post to sophomore forward Elo Ozumba. Ozumba flicked it past the keeper, and for the remaining 50-plus minutes the Cats defense held.

Tension built as the game wore on, and it appeared the Fighting Irish finally would pull it out early in the first overtime. Instead, forward Patrick Hodan’s shot hit the far post, and NU’s impressive defensive effort was not laid to waste.

Fresh off two troubling defeats, a draw against such a highly ranked opponent allows the Cats to remain in the NCAA tournament conversation.

NU concludes its home portion of the schedule this Saturday against Michigan State at 2 p.m.