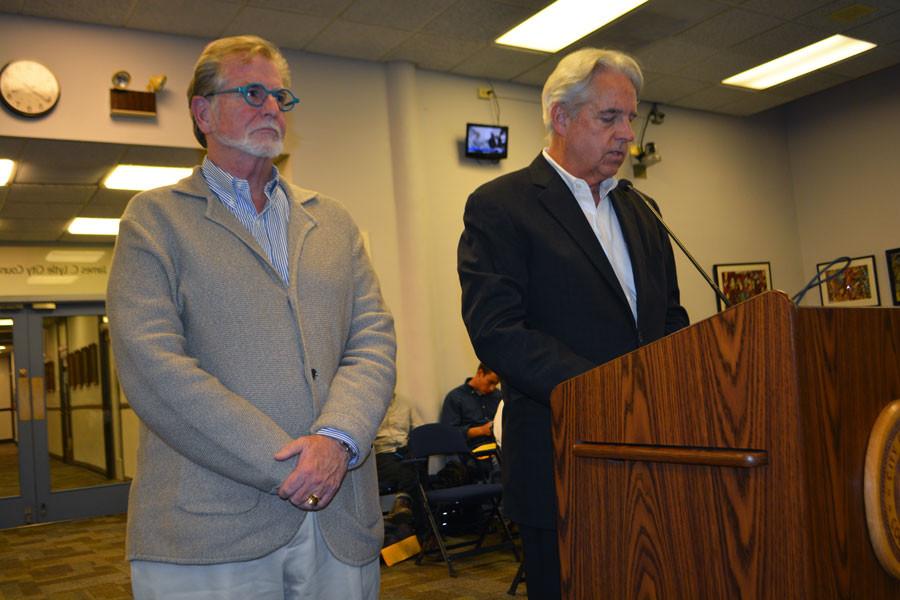 Northlight Theatre executive director Tim Evans (right) and artistic director BJ Jones speak to City Council about their interest in returning to Evanston in its proposed downtown performing arts center. Northlight Theatre was founded in Evanston in 1974 but has been established in Skokie at the North Shore Center for the Performing Arts for nearly two decades.

Aldermen reacted positively to a presentation by Northlight’s executive director Tim Evans, who has been working with city staff on the potential new performing arts center. City staff has been collaborating with Northlight and with a development firm working with Evanston’s Second Baptist Church on plans for a site at the southeast corner of Clark Street and Benson Avenue.

Officials at Northlight have been looking to relocate to Evanston to expand their facilities and be closer to an urban hub, Evans said at the meeting.

“We seek access to public transportation, plentiful parking, pre- and post-show dining in addition to a main stage theater and use of a second stage theater,” he said. “We would like a space for workshops, small musicals and classes. That’s why Evanston was an exciting option for us.”

Northlight Theatre currently operates at North Shore Center for the Performing Arts in Skokie, where it has been located since 1996. The group was founded in Evanston in 1974.

Based on a $37 million preliminary plan for the theater presented to aldermen in July, the theater group chosen to partner with the city would be expected to participate in the fundraising effort for the center’s development. In the plan devised by city residents and staff, the group would permanently occupy the largest of the center’s three auditoriums, seating 350 people. Another performing group could claim the 200-seat theater, while the smallest theater fitting 100 would be open to temporary occupants.

Evans said he hopes Northlight’s return would strengthen the creative community in Evanston by maintaining the relationships it has fostered with organizations throughout the community. These relationships with Northlight have included Evanston Township High School, Evanston/Skokie School District 65 and Evanston’s Youth & Opportunity United, he said.

Jason Balla, owner of The Stained Glass Restaurant in Evanston, said he is hopeful Northlight Theatre will enhance business at dining establishments around the area. Balla said he was certain members of the musical community would be excited by the prospect of a prominent theater located in Evanston.

“We aspire to be a community center where patrons can see world-class theater,” Evans said. “We want to … serve as an inclusive and vital arts partner in the city. Evanston enjoys a rich cultural community committed to those that are creative.”

City manager Wally Bobkiewicz said the discussion surrounding Northlight’s relocation was particularly relevant given the prominent roles City Council has taken in establishing arts venues and activities around the city.

“City Council has provided tremendous leadership in this area,” he said. “We created a standalone cultural arts coordinator working with the Evanston Arts Council, a photography exhibit at the Civic Center and a whole variety of other things.”

Bobkiewicz said this project is a work in progress and updates will be provided on the status of the move at subsequent council meetings.