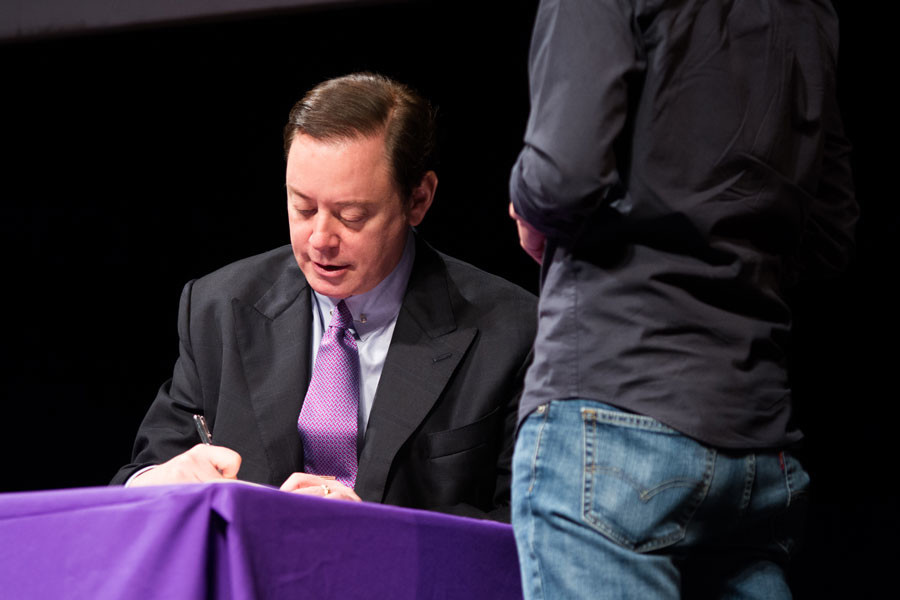 Author Andrew Solomon signs copies of his book “Far from the Tree: Parents, Children, and the Search for Identity” for audience members following a talk in Cahn Auditorium. Solomon, a bestselling author, spoke about issues of identity in families of children with disabilities.

Andrew Solomon, author of “Far from the Tree: Parents, Children, and the Search for Identity,” a New York Times’ Best Book of 2012, shared stories of love, heartbreak and acceptance with a packed audience Tuesday night at Cahn Auditorium.

In “Far from the Tree,” Solomon follows hundreds of parents of children dealing with deafness, dwarfism, Down syndrome, autism, schizophrenia and other disabilities. Solomon describes how these universal struggles can lead to growth and promise.

Prior to the event at Cahn, Solomon spoke to members of Chapin Hall. He told them his narration is so effective because of his ability to understand and uphold the trust his interviewees give him.

“A surprising number of people don’t want to talk about these types of things because they are upsetting and they think people won’t understand,” Solomon said. “If you are able to make them feel like they will be understood, they actually long to get past the loneliness. People want a sympathetic and nonjudgmental ear.”

Solomon spoke about some of the hardships parents face and how much good can come out of life’s toughest moments. He shared the story of Clinton Brown III, who has a condition called diastrophic dwarfism. When he was born, Solomon said the doctors told Brown’s parents he was not going to live very long, so they should let him die “quietly” in the hospital.

However, Solomon said Brown’s mother refused to leave her child behind.

“If he dies, at least I know I brought him home and I did my best,” Solomon recalled Brown’s mother saying. “Almost every doctor said he wouldn’t live, except for one that said, ‘That is going to be a handsome young man one day.’”

After 30 major surgeries, Clinton is the first person in his family to attend college.

NU art history Prof. Claudia Swan, a longtime friend of Solomon’s, said she hopes students who attended Solomon’s event will realize how important it is to have compassion and a broader understanding of the struggles families go through. She believes having this knowledge is important for building students with character.

“I want students to leave with a sense of how much impact a deep understanding of human character, identity, life crises and syndromes can have,” she said.

Tom Burke, assistant director at the Alice Kaplan Institute for the Humanities, said Solomon’s lecture is a huge step for the humanities department. He said people often neglect the importance of the humanities, something he said he hopes changes by bringing speakers like Solomon to NU.

“People often mistakenly dismiss the humanities and the humanities are all around us all the time,” he said. “So it’s less about making a case for the humanities as we are trying to demonstrate how present and relevant they are in our present-day lives.”