Volleyball: NU struggles with consistency in second weekend at home 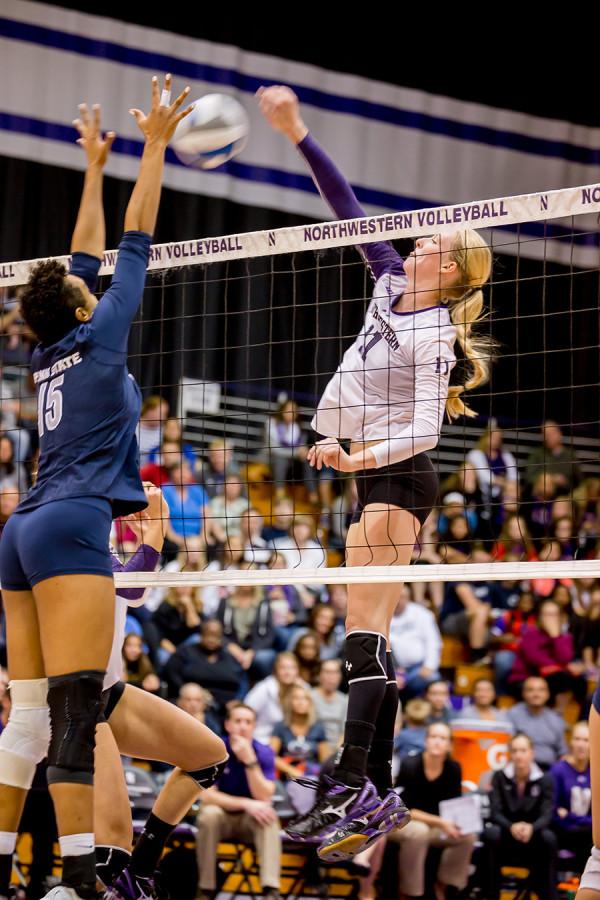 Junior middle blocker Maddie Slater spikes the ball. Slater notched 12 kills for the Cats over the weekend, including eight in the team’s victory over Iowa on Sunday.

The Wildcats (12-7, 4-4 Big Ten) took quite a beating on Friday from No. 3 Nebraska (16-2, 7-1), who, during its sweep through Illinois, swept the floor with the Cats. Subsequently, the Cornhuskers moved up in the Big Ten standings to No. 1.

Aggression on the court has been a focal point for NU all season, especially in its matchups these past two weekends. The Cornhuskers, who lead the Big Ten in digs, were both more aggressive from the service line and at the net than the Cats.

Coach Keylor Chan appeared visibly frustrated after the first set, where the Cats finished with a cumulative hitting percentage of 0.097. Although he said when NU handled the ball, it was “right there with Nebraska,” the Cornhuskers proved to get the better of the host.

“(Nebraska) served extremely well tonight,” Chan said. “They frazzled us. They kind of did to us what we did to Penn State.”

Sunday seemed to be the Cats’ lucky day because they got to welcome one of the worst teams in the conference. The team redeemed its loss from Friday by beating Iowa (10-11, 0-8), 3-1.

Iowa’s tied-for-last-place ranking did not cause the team a lapse in passion on the court for NU. Junior outside hitter Sofia Lavin, who led the team in kills, spoke of the importance of not letting play slip, no matter the opponent.

“I think it’s important to not play down,” Lavin said. “We need to stay up at our level, just getting at it hard.”

After seeing how aggression paid off for the Cornhuskers on Friday, the Cats stepped it up to shake up the Hawkeye offense and defense. Junior outside hitter Kayla Morin attested to their hard work at the service line and commented on how disrupting Iowa’s rhythm with its serving immensely helped NU.

“The thing that we improved on most was our serving,” Morin said. “We made it hard for them to run their offense and kept the ball in play to give us more chances to put it down.”

The Big Ten currently has eight out of 14 teams represented in the AVCA Coaches ranking and nine out of 14 in the top 25 of the NCAA Women’s Volleyball RPI.

“Everyone is good in the Big Ten,” Chan said. “Everyone wants to talk about numbers, but Iowa is a good team.”

Going into its next games on the road, the team no longer has its home court advantage, and although it will be playing against one of the lowest-ranked teams in the Big Ten, Indiana (12-8, 2-6), it will also be matched up with No. 18 Purdue (15-4, 6-2), who is currently tied for fourth in the conference.

While the stint at home was not as fruitful as the Cats may have hoped, Lavin noted the main difference between their games against Nebraska and Iowa was the Cats’ confidence level. If they can take this confidence with them on the road, Lavin said they are bound to be more successful than they have been on the road — and at home — in the past.

“As long as we go in and play the way we know how to play, we can take care of a lot of teams,” Lavin said. “We’re excited for the competition to come.”