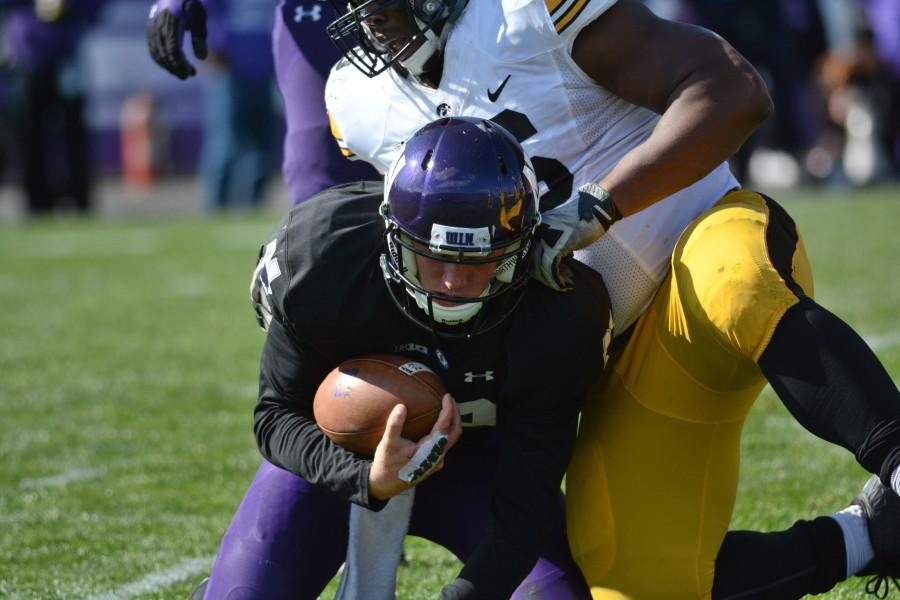 Quarterback Clayton Thorson gets sacked in the first half. The redshirt freshman struggled throughout the game, completing fewer than half his passes for just 125 yards while also throwing an interception.

Northwestern’s offensive production was largely confined to the second quarter, when the Wildcats were able to put a few scoring drives together for 10 points. NU mixed up the play-calling and redshirt freshman quarterback Clayton Thorson looked sharp, the highlight being a 34-yard completion on a go route to junior wideout Mike McHugh.

Other than that, there wasn’t much on the positive side for the Cats. The offensive line provided Thorson with a relatively clean pocket for most of the day sans the untouched rusher that led to a Thorson fumble early in the fourth quarter.

The lowlight of the game was Northwestern’s atrocious run defense. Iowa rushed for five touchdowns, despite losing running back Jordan Canzeri to an injury early in the game. The star of the contest was definitely sophomore running back Akrum Wadley, who ran for 204 yards and four touchdowns. The Cats had no answer for Wadley’s quickness to the edge on stretch and power runs to the outside and were hurt by missed tackles.

The Cats also beat themselves with turnovers. Thorson stared down senior wide receiver Christian Jones on NU’s first drive for an interception that led directly to an Iowa field goal to put the Hawkeyes up 3-0. Sophomore running back Justin Jackson also fumbled on a mishandled option exchange with Thorson, which led to a Hawkeyes touchdown.

This loss makes NU’s chance at the Big Ten Championship a long-shot. Barring a total collapse from Iowa, the Cats effectively trail the Hawkeyes by three games due to the head-to-head tiebreaker.

The season has yet to be defined for the Cats, however. The key question will be whether they can avoid a 2013-like collapse and salvage a season that once seemed so promising.

Correction: A previous version of the caption accompanying this story misspelled quarterback Clayton Thorson’s name. The Daily regrets the error.