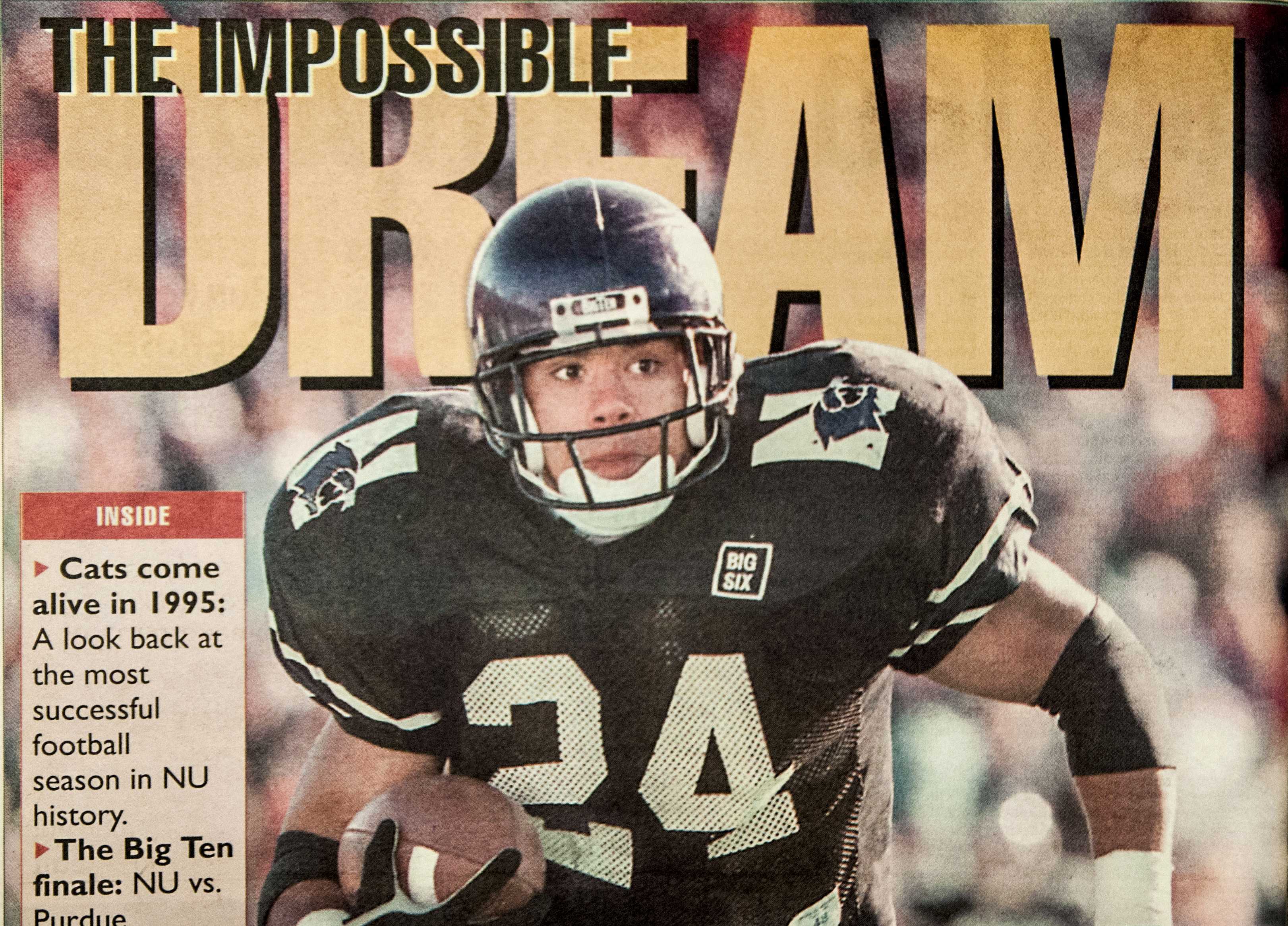 Not the AP voters, who didn’t rank Northwestern until the fourth week of the season. Not Sports Illustrated, which picked the Wildcats to finish 11th out of 11 teams in the Big Ten before the season began. Not Vegas odds makers, who pegged NU as 27-point underdogs heading into its first game against Notre Dame. And not Ben Bolch (Medill ’96), deputy sports editor for The Daily Northwestern in the fall of 1995.

“Before the season I had seven games that were winnable and four that were miserable,” Bolch told the Daily this week, explaining that miserable games were certain losses in his eyes.

One of those hopeless contests was against the Fighting Irish, whom the Cats ultimately toppled to spark their unforgettable season. Ten games and nine wins later, NU was the 1995 Big Ten Champion and on its way to Pasadena, California, to play in the Rose Bowl.

The Cats went 4-6-1 in 1994, which certainly didn’t seem like the harbinger of anything great. Tim Hughes and Steve Schnur split time at quarterback, with neither producing stellar results, and running back Darnell Autry was a backup for the unheralded Dennis Lundy.

The difference, Bolch and receiver D’Wayne Bates said, began when many members of the 1995 team stayed in Evanston the summer before the season to work out together. That summer was exceptionally hot, with record-breaking temperatures leading to as many as 733 deaths in the city of Chicago.

That experience helped the team grow closer together and shifted expectations for the upcoming season.

“We were very confident we’d be a better team and have more wins than the season before,” Bates said. “All that together afforded an opportunity to win every game.”

That spirit showed itself in NU’s gutsy opening week victory over Notre Dame, a win that still stands as one of the biggest upsets in program history. But one sample wasn’t enough to determine if the Cats were going to be serious contenders, and true to stereotypical NU form, the team lost its next game to Miami (OH) on a blocked punt.

That game, Bates said, taught the Cats the most important lesson in football: the team had to be able to finish strong.

NU recovered by strolling to easy wins over Air Force and Indiana and climbing back to No. 25 in the AP Poll before facing its next major test of the season: visiting Ann Arbor to face No. 7 Michigan. Behind four field goals from kicker Sam Valenzisi, the Cats triumphed over the Wolverines in a hard-fought defensive battle.

It was at that point, Schnur, Bates and Bolch all said, that players, media and fans alike began to believe.

Jennifer Scroggins (Medill ’97), another deputy sports editor for the Daily in 1995, explained that there was little fan interest before the Michigan win. The victory changed perceptions about the talent level and potential of the team.

“Autry was for real, (linebacker Pat) Fitzgerald was for real,” Scroggins said. “They were good college players.”

And from that game on, NU showed the dominance it was capable of, cruising to wins over Minnesota, Illinois and Purdue, crushing No. 24 Wisconsin at home in a 35-0 shutout, dispatching No. 12 Penn State in a key late-season matchup and prevailing over rival Iowa by an 11-point margin.

But the year was far from flawless, with two injuries, to Valenzisi and Fitzgerald, which threatened to derail the season.

Valenzisi tore his ACL celebrating a booming kickoff against the Badgers, jumping up and crumpling upon landing. And Fitzgerald, the heart of the defense and eventual winner of the 1995 Bronko Nagurski award—given to the nation’s best defensive player—suffered a broken leg against Iowa from what he told the Chicago Tribune was just a “freak accident.”

Both losses hurt on paper, but NU was able to persevere thanks to what Bolch described as one of the Cats’ greatest strengths: depth.

And beyond having a bevy of talent, Schnur and Bates both agree the team also shared a special chemistry.

That bond, and a crucial win by Michigan over arch-rival Ohio State in the penultimate week of the season, propelled NU to its second-ever postseason appearance and first since the 1949 Rose Bowl.

Just making it to a winning record in 1995 would have been a wild success.

“Our expectations were internally only,” Schnur said. “By a good year, we meant making it to a bowl game.”

The Cats’ meteoric rise captured the imagination of the country. ESPN’s then-nascent College GameDay paid a visit to Evanston, not to return again until 2013, and Sports Illustrated featured Autry on its Nov. 13, 1995 cover.

Southern California prevailed over the Cats in Pasadena, 41-32, thanks in part to a dominating performance by future NFL wide receiver Keyshawn Johnson, but simply making it to what Bates called “the pinnacle of college football” was a massive accomplishment for NU. The program proved it could stand on a national stage.

“NU had probably 60 percent of the fans there,” Bolch said. “The purple overwhelmed the cardinal and gold.”

Even with the bowl loss, it was a season to remember. Autry lead the nation in carries with 387, rushing for 1785 yards and 17 touchdowns and finishing fourth in that season’s Heisman voting. And on the other side of the ball, Fitzgerald won the Chuck Bednarik award for being the nation’s best defensive player along with the Nagurski award, and was also named a consensus All-American and the Big Ten Defensive Player of the Year.

More than anything else, the 1995 season permanently raised expectations for NU football.

“There were no expectations 20 years ago,” said Scroggins, who still follows the team today. “People actually believe we can win now. … That’s something.”

The Cats overcame their bowl curse after the 2012 season with a win in the Gator Bowl, just the second bowl victory in NU history and the first since the 1949 Rose Bowl, but followed that effort with back-to-back 5-7 seasons. The quest for sustained success continues.

Twenty years after the Rose Bowl run, with NU at 5-1 and ranked No. 20, it’s easy to draw parallels between the 1995 and 2015 squads. Autry was the workhorse running back, Fitzgerald was the star defender and Schnur was the game-managing quarterback; roles that current players sophomore Justin Jackson, sophomore Anthony Walker and redshirt freshman Clayton Thorson fit into nicely.

Bates sees similarities between the two teams’ defense-oriented, run-first philosophies, and Schnur believes the 2015 squad has a level of chemistry comparable to what the 1995 players shared.

And in light of all the connections, the throwback jerseys, the focus on the 1995 team as part of homecoming and the matchup with rival Iowa — the team Fitzgerald broke his leg against — to potentially decide the Big Ten West, Fitzgerald said he still draws on the past to motivate his players, some of whom weren’t alive for the 1996 Rose Bowl.

“I draw upon the battles that group won, and how they did it,” the coach said. “Even more so about the fun that we had. That group had a lot of fun, and winning helps you do that.”

Academic requirements exclude NU from ever ascending to be a powerhouse of the Big Ten, but the lasting legacy of the 1995 season shows that, even if just for a year, the Cats can be on top. Going to the Rose Bowl is possible, and not just in the technical sense — it has actually been done.

Without the 1995 season, there aren’t any throwback jerseys or fans packing the stands at 11 a.m. There may not even be a Fitz — now the undisputed hero of the program — stalking the sidelines.

Northwestern lost the Rose Bowl, but 20 years later is still feeling the positive effects of that legendary season.