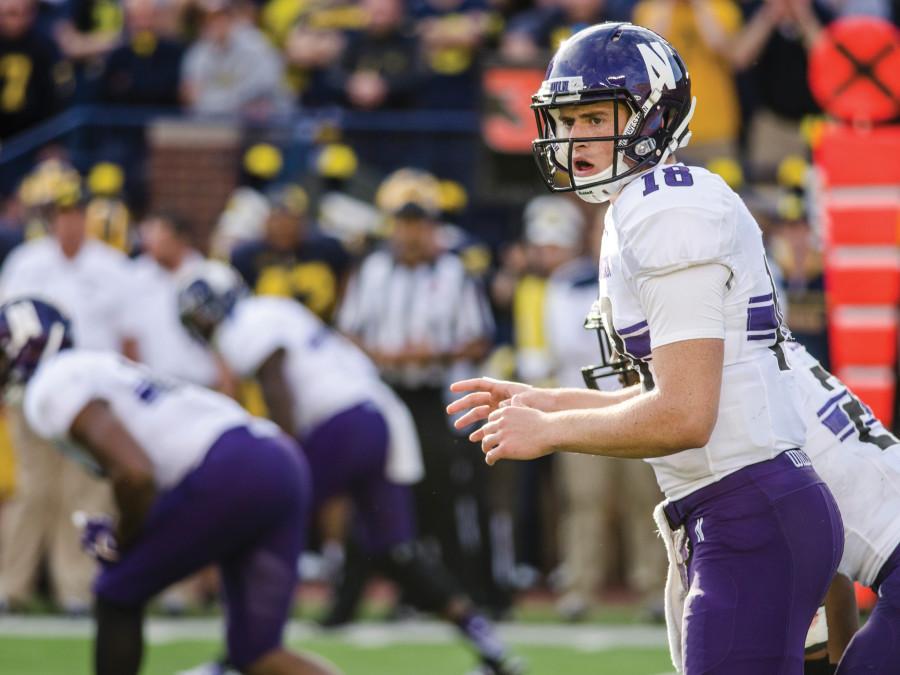 Clayton Thorson barks out assignments before a snap. The diligent redshirt freshman still has plenty of room for improvement in his first season.

On the bus ride back to Evanston after Northwestern’s 38-0 loss to Michigan, Clayton Thorson dove into the game film. He watched his Wildcats offense sputter to 168 yards, saw the unit fail to convert on 11 of its 13 third-down attempts, viewed his should-have-been interception in the second quarter and his actually-was interception (returned for a touchdown) on the next play.

It’s all part of the process of improvement.

“After every game you’ve got to go back and look at the tape, see what you did wrong and see what you did right,” Thorson, a redshirt freshman, said. “Obviously after this game there’s a worse taste in your mouth.”

In August, when NU named Thorson starting quarterback, the Cats looked like a borderline-bowl team, not the Big Ten West-title contenders they now appear to be. After one year of apprenticeship as a true freshman, Thorson was supposed to take over a promising start-up — instead he’s become CEO of a Fortune 500 company.

Thorson has certainly had his moments this season. There was the beautiful lob to Miles Shuler to help seal Northwestern’s win against Stanford, the 17-point third-quarter against Ball State, the touchdown run against Duke and the two others against Minnesota.

And he’s had a few plays he’d like to have back, such as the near-interceptions against Stanford, the numerous incompletions against Duke, the three-turnover first half against Ball State and just about everything against Michigan.

So it goes as a redshirt freshman quarterback in the Big Ten.

“It’s all a process of learning and getting better,” offensive coordinator and quarterbacks coach Mick McCall said. “But I think he’s farther along than a lot of people expected right now.”

Thorson’s numbers won’t win him any awards. He’s completed 77-of-140 (55 percent) of his passes on the season, with four touchdown passes and four interceptions. Of 125 FBS quarterbacks, with roughly 23 pass attempts per game, he ranks 114th with 5.8 yards per attempt. The Wheaton, Illinois, native is known as a dual-threat and has flashed the ability to run the ball, but he hasn’t made a big play with his feet since his 42-yard touchdown scramble against Stanford.

Thorson doesn’t need to carry the Cats, but he needs to keep their offense on the field, namely by avoiding turnovers. The quarterback has found trouble this season when he failed to read the opposing defense and advance through his progressions. Against Ball State, he threw an embarrassing interception on a miscommunication with receiver Shuler. The play called for Shuler to either streak down the sideline or curl in, depending on the coverage — the receiver correctly chose to hitch, but Thorson lobbed the ball down the field, right into the arms of a defender.

“It’s a process as a quarterback,” coach Pat Fitzgerald said after that game. “He’s handled the ebb and flow very, very well. That’s a young man that’s growing and really understanding the significance of his role.”

The improvements are coming incrementally. Take Thorson’s pocket presence. Early in the season the quarterback seemed to scramble from the pocket at the first sign of pressure. But as the year has progressed, that has begun to change. Senior superback Dan Vitale attributes that to Thorson’s growing confidence.

“He’s not afraid to get hit anymore,” Vitale said. “He stays in there and steps up and makes the throws now, which I think is evident even in this last loss.”

Thorson said his instincts are catching up with the speed of the college game, allowing him to make proper decisions under pressure.

“It’s just about feeling the pocket,” the quarterback said. “Our o-line is doing a really good job of pass protection. I’ve just got to feel it. If there’s a guy in my face I’ve got to get out and make a play.”

Coaches and teammates emphasize Thorson’s even-keeled personality, how, in McCall’s words, “He doesn’t get too high or too low.” That calm demeanor seems almost necessary for a redshirt freshman thrust into a position of enormous responsibility and saddled with all the fan attention, media requests and Internet criticism that comes with it.

By all accounts, Thorson has handled his debut season with all the maturity a coach could ask for. That begins in the film room, where, McCall says, the quarterback takes a proactive role to tape study.

“He’s telling me what could be better,” McCall said. “He’s really coaching me up. And I’m trying to correct him as he goes through it, but he knows what he’s doing wrong after he’s got a chance to look at it.”

Asked what he has done most successfully this season, Thorson doesn’t point to any sort of on-field accomplishment. Instead he notes that he’s done a good job “getting in the film room and being a student of the game.”

With three more college seasons ahead, the future appears bright for Thorson, but NU needs him to maintain control this season as the team wades deeper into its conference schedule. If Thorson leads the Cats to a division title, he will do so partly through talent but also through the work ethic and dedication to improvement that motivated him to pull up that game tape after the Michigan game. He knows he has no time to waste; he needs to keep getting better right now.

“The sky is the limit for him,” McCall said. “This is the reason why: He will continue to take coaching, and he wants to learn everything. Not many times does he make the same mistake twice. He will take it, and it will lock in, and then three weeks down the road that same thing will happen and he doesn’t make the same mistake.”