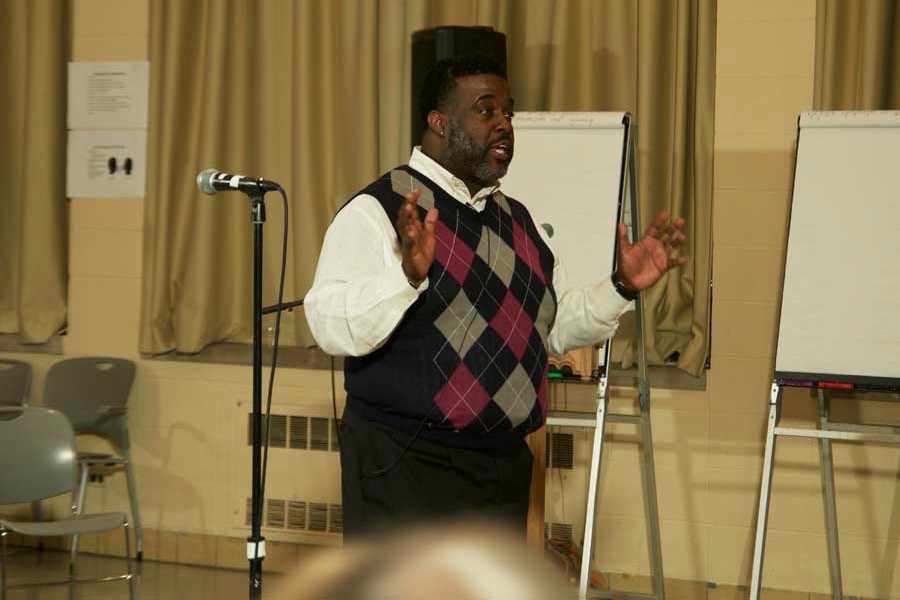 Jamie Washington, known on campus for presenting the diversity and inclusion Essential NU during Wildcat Welcome, facilitated the first two listening sessions on the future of the Black House and the Multicultural Center. About 50 people attended the second session Wednesday evening.

Faculty apologized Wednesday for not involving students and alumni in the decision to change spaces in the Black House and the Multicultural Center during forums on the future of both buildings.

Hosted by Multicultural Student Affairs and Campus Inclusion and Community, the listening sessions with Northwestern students and alumni were created in response to negative reactions members of the community had to the plans to move CIC offices from Scott Hall to the Black House and the Multicultural Center. The first two sessions were held Wednesday at Parkes Hall and the next two will be held in November.

“To start off, I want to apologize that the attempt to communicate the proposed views for the space in the Black House were not successful at engaging the community nor effectively delivered,” said Patricia Telles-Irvin, vice president for Student Affairs. “Rather than achieving transparency, we accomplished something very different from what was anticipated.”

About 50 people attended the evening listening session and about 40 attended the one at noon, Kelly Schaefer, assistant vice president for student engagement, told The Daily. She also said more than 70 people watched the first session online. Jamie Washington, who presents annually at the diversity and inclusion Essential NU during Wildcat Welcome, facilitated the sessions and will continue to do so for the next two.

The review board will sit in on all of the sessions. It aims to listen to concerns and will forward recommendations to Telles-Irvin at the end of the listening sessions’ process, hopefully by the end of Winter Quarter 2016, Telles-Irvin said.

Both administrators apologized for what they said was a “misstep.” Telles-Irvin said she has learned about the Black House’s significance through conversations with alumni and students.

“I do hope that by having an open and honest discussion we may experience movement in a direction that will continue to honor the history and significance of the Black House and at the same time serve the needs of our current students,” she said.

Brown-Henderson acknowledged the timing of the proposed moves of her office and four other CIC staffers’ offices into the Black House was “not ideal.” She then apologized to the audience for the miscommunication during this summer’s decision-making process regarding the facilities, as students and alumni alike have said they were not consulted or involved in the process.

“Our major misstep was insufficient communication with you, which placed each of you in a position to have to assume our intentions,” she said. “In a time when blackness is under constant attack, I understand how our miscommunication elicited distrust and suspicion.”

She praised alumni and students who raised their voices against the changes and said she understood the Black House is a “sacred space” for black students as a “symbol of the fight for equity” on campus.

Brown-Henderson also explained the proposed move came after nine months of “communicating with the Northwestern student, alumni, faculty and staff communities about the restructuring of CIC.”

Before opening the floor for student and alumni voices, Brown-Henderson invited black students and alumni to participate, as well as members of other minority groups on campus who saw their spaces jeopardized by these changes to the Black House and Multicultural Center.

“I invite the students who also care about the (Multicultural Center) to this conversation,” she said.

Many of the students who spoke during the second session talked about their experiences in the Black House, saying it is a safe space for them and that its community positively affected their NU experiences.

Weinberg sophomore Jade Mitchell said she was swayed to pick NU over a historically black college after she visited the Black House and saw its community. She said people at the Black House have her best interests in mind.

“I don’t want that the Black House just becomes another building on Sheridan,” she said. “That’s actually gonna make me kind of regret coming here, if I’m gonna lose the support that I could’ve gotten from another institution.”

Lynette Boone (Medill ‘79) said the current students’ message is not much different than the one students had when she attended NU, and emphasized the importance of the Black House not only in a student’s life at NU but also beyond graduation.