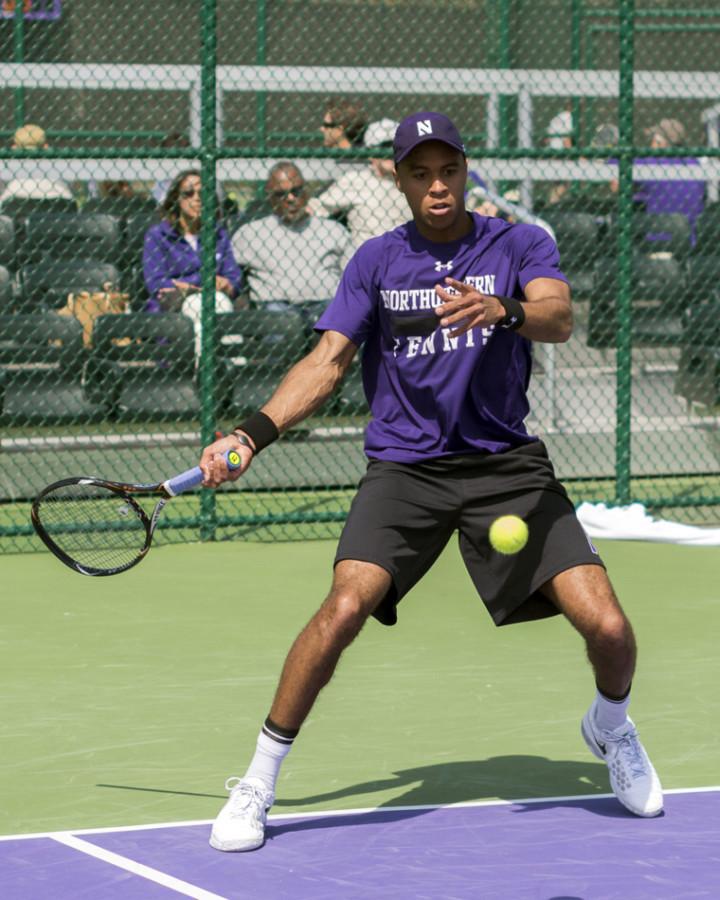 Junior Sam Shropshire readies his return. Shropshire was the runner-up in the consolation bracket at the All-American Championships, but it was junior teammate Konrad Zieba who stole the show for NU with an improbable run to the quarterfinals.

Northwestern began its preseason tournament play this past week, as six Wildcats, led by juniors Konrad Zieba and Sam Shropshire, represented NU in the All-American Championships.

Despite having to qualify for a spot in the main draw, Zieba headlined the Cats’ success, riding a wave of momentum to the tournament’s quarterfinals. Though eventual champion Thai-Son Kwiatkowski of Virginia — seeded third in the bracket and ranked eighth by the ITA — cut Zieba’s Cinderella run short, the unranked NU junior still managed to dispatch six opponents en route to the quarterfinals, including four ranked in the ITA’s Top 100.

“I competed really well,” Zieba said. “It was a great opportunity to play against some of the top players and I gave myself a good chance. I’m just proud of myself mentally for being able to hang with some of the top guys in the country.“

Among those he sent packing were No. 26 Tin Ostojic (Wichita State), No. 13 Roberto Cid (South Florida) and No. 23 Dovydas Sakinis (Dartmouth).

Despite entering the tournament unranked without a solidified spot in the main draw, Zieba’s success hardly shocked teammates.

“Personally, seeing him do well was no surprise to me,” Shropshire said. “Even though on paper one person was ranked higher, I always knew that Konrad was kind of the better player.”

Shropshire, ranked No. 34 in the country, also enjoyed his fair share of success, though the two-time All-Big Ten performer hit his stride a match too late.

Despite entering with a guaranteed spot in the main draw, he finished second in the consolation bracket after dropping his opening match to San Diego’s Jordan Angus, 6-4, 7-6 (3).

“In the main draw, it was just one of those tough days,” Shropshire said. “I wasn’t as sharp as maybe I could have been.”

Still, he defeated three ranked opponents in the consolation bracket before losing to No. 32 Mikael Torpegaard of Ohio State in the finals, 6-4, 6-4.

“It was good to be able to rebound after losing that first round match,” Shropshire said. “That’s the good thing about having the consolation draw.”

Like Zieba, Kirchheimer was placed in the qualifying draw. However, after opening with two wins, he lost in the final round to Florida’s Alfredo Perez, 6-4, 0-6, 6-2.

“Honestly, I had a couple nice wins and that was great, but I was frustrated when I lost that match because it was someone who I probably shouldn’t lose to,” Kirchheimer said. “I kind of just let it slip away.”

Kirchheimer also saw room for improvement in his double’s play. He and longtime partner senior Fedor Baev lost in the second round of the qualifying draw after opening the draw with an emotional victory that saw the duo fall within a game of losing before eking out a victory.

NU’s other doubles teams were also unable to qualify for a spot in the main doubles draw. Shropshire and junior Alp Horoz fell a match short, losing in a tiebreaker after opening the draw with two wins. Zieba and senior Mihir Kumar lost in straight sets in the opening round.

With one tournament behind them, the Cats now have the road ahead for which to prepare. Next up for NU are the the Regional Championships at Notre Dame, which begin Oct. 22.

“Regionals (are) coming up and that’s pretty big for us,” Kirchheimer said. “We’ve got most of our guys going to that and there’s a lot on the line there, playing guys from our conference. Ultimately we’re trying to win a Big Ten title and we have the forces to go and do it this year.”