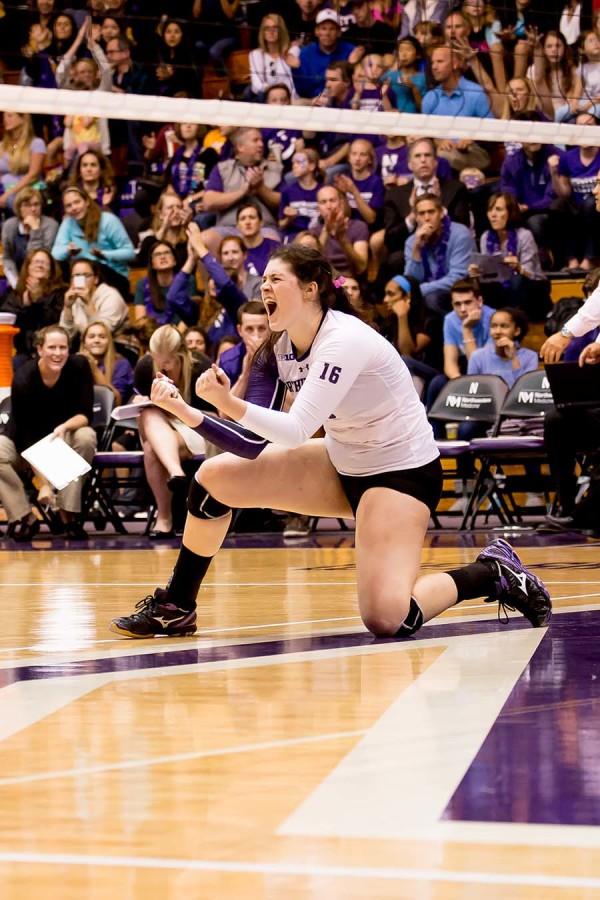 Junior outside hitter Sophia Lavin screams in celebration. Lavin notched 10 kills for the Cats, including the final one of the game, in their upset of No. 3 Penn State.

On a day when most Northwestern fans were reeling after the football team’s blowout loss to Michigan, volleyball coach Keylor Chan led his team to perhaps the biggest upset in program history.

In front of a packed Welsh-Ryan Arena on Saturday, the Wildcats (11-6, 3-3 Big Ten) took down back-to-back defending national champion No. 3 Penn State (15-2, 4-2) in five sets. The victory was NU’s first over the Nittany Lions in almost 13 years.

“It’s an incredible feeling,” sophomore setter Taylor Tashima said. “Penn State (knows) they have a target on their backs and teams are going to show up to play them.”

Just how long has it been since the Cats’ last win over the Nittany Lions? When NU last knocked off Penn State 3-1 on November 23, 2002, “Harry Potter and the Chamber of Secrets” had just been released in theaters, gas prices averaged $1.38 and the Euro was less than one year old.

By defeating Penn State, the Cats snapped a three-game losing streak where they didn’t win a single set. Saturday was also NU’s first match in almost a month that went more than three sets.

The Cats’ win starkly contrasted their performance from just one night earlier, when No. 9 Ohio State steamrolled NU. A normally level-headed Chan expressed joy but didn’t get too excited following Saturday’s match.

“(Wins) all count the same, but yeah, it’s great,” Chan said. “This team is searching for a level of confidence and an identity … we don’t want the wins and losses to define us.”

Momentum started to swing NU’s way in the third set. After splitting the first two sets, the Cats rallied behind sophomore hitter Symone Abbott’s seven third-frame kills to take the set 26-24. Additionally, the victory came against one of the nation’s best blocking teams in Penn State, and Chan was extremely pleased with NU’s performance despite being out-blocked 14 to 8.

Two controversial calls in the deciding fifth set nearly sunk the Cats. With NU leading 12-7, the refs awarded 2 points to the Nittany Lions that appeared to fall the other way. However, Chan was just happy NU came out on top.

“Refs are people too,” Chan said. “They’re doing the best they can.”

As the match went on, the Cats’ hitting efficiency dropped. Starting off with a .433 percentage through the first set, NU ended the night at .211 with the percentage per set declining in almost every frame.

Nevertheless, this win will be one the Cats will remember for a long, long time.

Abbott, who was in first grade when the Cats previously defeated the Nittany Lions, was much more emotional than Tashima and her coach following the match. Abbott had struggled in early Big Ten play this season, but registered 17 kills on the night, her highest total against a conference opponent since she put down 18 against Maryland in last year’s season finale.

“This is probably the best day of my life, to be honest,” Abbott said. “We’ve always been so close, and there (haven’t) been results. We’ve always been that team that’s in the bottom four of the Big Ten and no one expects anything of us … it’s just good to show people that we can do it.”