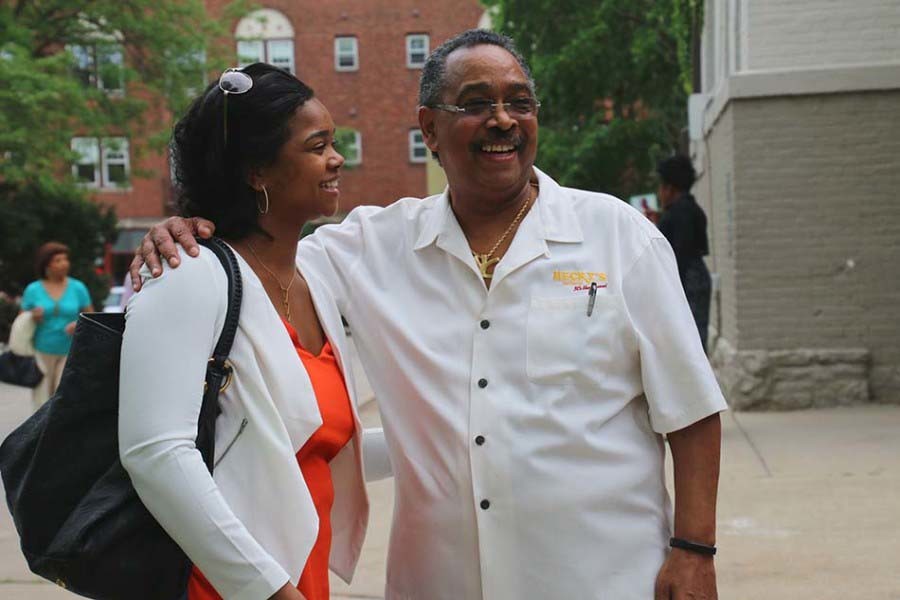 Hecky Powell, owner of Evanston restaurant Hecky’s Barbecue, welcomes guests to a city event in June. Powell has worked to build the restaurant into a community-building establishment.

More than three decades since its founding, Hecky’s Barbecue has become more than just a Chicago-area ribs restaurant. The barbecue joint has slowly evolved into a community-building establishment thanks to its founder and owner Hecky Powell and his passion for social service.

On Oct. 13, 1983, Powell opened the barbecue with his parents after his father was forced into retirement, Powell said. He said he worked at the restaurant each night after he finished his day job, which involved working as an administrator for Neighbors at Work, a social service provider in Evanston. Powell said he decided to resign from his previous job when he felt that social service programs, such as food stamps, were being exploited. He said he wanted to focus his efforts on the restaurant to make a more tangible impact on the employment of young Evanston residents.

“I hired young people and worked with them, taught them the work ethic and how to do different things in the restaurant,” Powell said. “I really enjoyed that because I was really doing something for these people.”

Floyd Johnson, a longtime partner and friend of Powell’s, agreed that Powell is interested in supporting his community.

“We’ve become somewhat of an institution in the community,” Johnson said. “(Powell) contributes a lot to the community, and we’re the first job for a lot of young people.”

Powell said he prides himself on giving back to his community in unique ways. In addition to hiring people who have a hard time finding work, Powell said he supports Evanston’s youth by sponsoring local sports teams.

Powell said he hopes to give back to his community further with a new business plan involving his popular barbecue sauce, which he began selling online in 2000 following attention the sauces received from local press. He plans to donate 10 percent of profits from online barbecue sauce sales to the Forrest E. Powell Foundation, an organization named after his father that grants scholarship money to high school students aiming to attend a trade school. Powell said the determination with which his father worked in a trade involving mostly manual labor inspired the namesake of the foundation. Additional donations come from Powell’s soda brand, Juneteenth Strawberry Soda. All profits go directly to the foundation.

“Not everybody’s made to go to college,” Powell said. “There’s nothing wrong with having a trade.”

Powell said he attributes much of his knowledge and success to his father’s hard work and determination.

“My dad told us, ‘Anything that you do, learn as much as you can from it’,” stated Powell.

Zandra McDuffy, an employee at the restaurant for the past 18 months, said Powell is continuing to teach what he learned from his father to his young employees while creating a supportive and family-like connection between those who operate the restaurant.

“This is home,” McDuffy said. “The music, the food, collectively what we do here… is what I like most.”

Aracely Rodriguez, a four-year employee, added that the environment at Hecky’s is welcoming and friendly.

“Everybody is always happy here, so everybody gets along,” Rodriguez said. “Hecky is always in the best mood, so it’s pretty fun every day.”

Over time, Hecky’s Barbecue has grown to take up nearly four times as much space as it did when it was founded, Powell said. He said services have evolved from simple take-out to catering, online sales and retail. Powell said this expansion has allowed the growth of the restaurant’s brand and financial success, in turn granting his foundation a greater ability to serve Evanston youth.