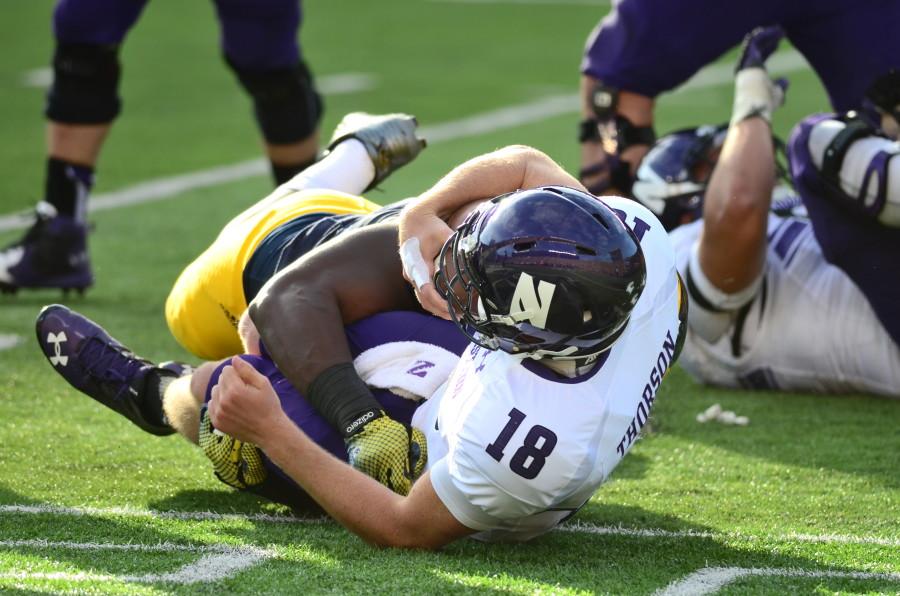 Redshirt freshman quarterback Clayton Thorson takes a sack during Saturday's game against Michigan. Thorson completed 13 of 27 passes and threw one interception in the 38-0 loss.

ANN ARBOR, Michigan — Everything unraveled in about 15 seconds.

“We got beat by a very good team today, and we didn’t play well, and we made them look better,” coach Pat Fitzgerald said. “I thought we played terribly.”

After the special teams touchdown seemed to be an early harbinger of defeat in a contest billed as a low-scoring defensive struggle, Michigan went on to dominate every aspect of the game.

The vaunted Wildcats defense, which prior to this game had given up just 7 points per contest, surrendered 14 offensive points in the first half alone, which combined with Chesson’s score and a pick-six thrown by redshirt freshman quarterback Clayton Thorson created a 28-0 halftime deficit far too deep to dig out of.

On his second pass of the game, Wolverine quarterback Jake Rudock found a wide-open Jake Butt over the middle, completing a pass to the tight end to move Michigan to the one-yard line. One drive later, fullback Joe Kerridge burst through the line and plodded past NU’s out-of-position linebackers for a 34-yard gain.

NU suffered death by many small cuts, with nine different Wolverines rushing the ball a combined 45 times for 201 yards and three touchdowns. Rudock ended the day totaling a very pedestrian 179 yards, but remained efficient by completing 17-of-23 passes and keeping the Michigan offense rolling.

“They just played well,” senior defensive end Deonte Gibson said. “They just had a good game plan against us.”

The defense eventually leveled its play, giving up just a field goal and a garbage-time touchdown in the second half, but suffered a huge loss in the third quarter when junior cornerback Matthew Harris left the game after a scary hit to the head.

On a routine run up the middle, Harris took a knee to the helmet and instantly went limp on the field. After receiving attention for several minutes, he gingerly boarded a cart and was taken off. Fitzgerald confirmed after the game that Harris was treated for a cheek laceration and was moving around the locker room, but gave no update on his long-term status.

“Hopefully most of that was for precautionary reasons,” Fitzgerald said, “and hopefully he responds in a positive way.”

When the Cats had the ball on offense, they struggled to get anything moving against an elite Wolverines defense, turning in a below-average performance that seemed exponentially worse under the pressure of playing catch-up. Thorson finished 13-of-27 for 106 yards and an interception, and sophomore running back Justin Jackson offered little relief by carrying just 12 times for 25 yards.

Predictably, Thorson was far from perfect in his first Big Ten road start and in front of more than 100,000 hostile fans. His first pick came on a 50-50 ball, one play after he threw a pass that should have been an easy interception for Wolverines safety Jabrill Peppers.

Thorson threw several other balls that went in and out of a defender’s hands and in general struggled to connect with open receivers.

“I thought (Thorson) targeted his throws pretty well,” Fitzgerald said. “It wasn’t above Clayton’s shoulders. … You have to credit Michigan.”

NU’s best scoring opportunity of the day, a 10-play, 50-yard drive starting at the Cats’ 25-yard line, was squandered on a missed field goal by Jack Mitchell. Despite having 4th-and-1 at the Michigan 25 and being down 14, Fitzgerald sent his junior kicker out onto the field, only to have him push the attempt wide left.

The Cats are now the third consecutive team to be shutout by the Wolverines, joining BYU and Maryland. Michigan’s dominance was great enough that NU pulled Thorson for senior backup Zack Oliver, effectively giving up on the game, with about 10 minutes left in the fourth quarter.

After the blowout loss, NU has a week to recover before returning to Ryan Field to face No. 22 Iowa (6-0, 2-0) in the Cats’ homecoming contest.

“We just have to flush this,” senior superback Dan Vitale said. “We’re a much better team than we showed today and we know that.”