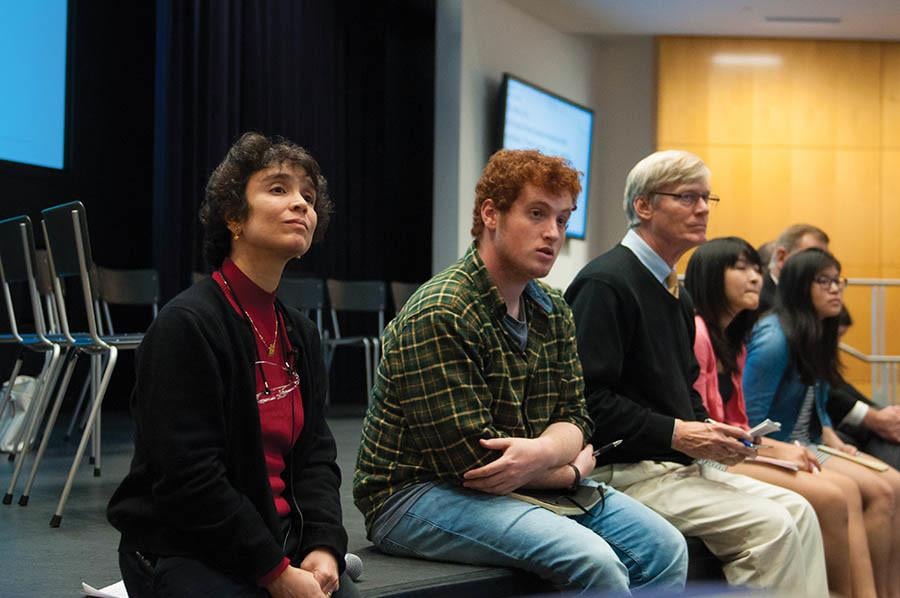 Neurobiology Prof. Indira Raman listens to a student’s comment during a forum on undergraduates’ academic experience Thursday. Raman chairs the task force that will propose reforms to Provost Daniel Linzer in mid-December.

Students focused on the effect of Northwestern academics on mental health during a forum on the undergraduate academic experience Thursday, offering criticisms to faculty tasked with proposing reforms for the current system.

More than 25 students attended the event, designed for task force members to hear undergraduates’ views on their academic experience.

“We really want to hear as much as we can,” said neurobiology Prof. Indira Raman, who chairs the task force. “All these things will influence our next set of conversations.”

Students spoke for most of the forum as task force members sat on stage taking notes.

Much of the meeting focused on students’ academic workload, its effects on their mental wellness and critiques of Counseling and Psychological Services.

Reducing students’ academic workload was a common suggestion throughout the forum.

“When we compare ourselves to our peer institutions on the quarter system, our workload sticks out as one of the hardest,” Weinberg junior Isaac Rappoport said. “We need to make it so that three classes is the norm at Northwestern.”

Associated Student Government released a report in March calling on Weinberg to lower the number of credits needed to graduate from 45 to 42.

Weinberg junior Joji Syed said NU prides itself on grooming well-rounded students, but the stress of doing it all can sometimes be too much.

CAPS limits students to 12 free counseling sessions before referring them to outside resources, a limit Hughes argued NU should waive.

“If you need (help with) mental health, and they’re saying, ‘You hit your 12 visits, so now you need to go into Chicago or Evanston and pay for it,’ you probably just won’t because you don’t want to burden your family with another cost,” she said.

Weinberg senior Kenny Mok said CAPS should offer same-day counseling, as some other universities do.

The wait-times to secure an appointment can also be burdensome, Rappoport said. He had to wait “three or four weeks” for an appointment at CAPS, a significant chunk of the 10-week quarter, he said.

Other students suggested socially conscious additions to the University’s curriculum.

Other students critiqued the University’s advising system. Syed called Weinberg’s academic advising “very subpar” and said that although she studies economics and political science, her first-year adviser was a biology professor.

“It’s so unbelievably pathetic that my freshman year adviser could barely help me,” Syed said. “She would literally tell me, ‘It’s a waste of your time to talk to me. Maybe go to the econ department.’ It just stuns me that these systems aren’t in place already.”

Raman told The Daily that the task force will present its recommendations to Provost Daniel Linzer in mid-December.

After the meeting, she said some “common themes” are emerging from the task force’s conversations with students, faculty and staff.

“We’ve heard from a lot of people talking about a lot of important things,” Raman told The Daily. “Our responsibility now is to write a document that will follow through on many of those things, those ideals about how Northwestern can be the best place it can possibly be.”