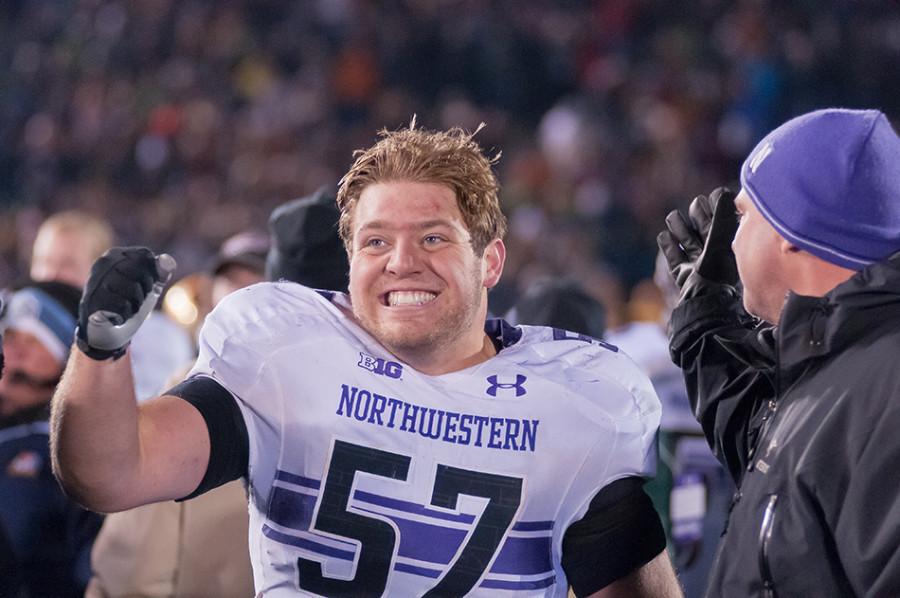 When coach Pat Fitzgerald visited Matt Frazier in the hospital this summer, the senior offensive lineman was trapped in his own thoughts.

Frazier was hospitalized for 10 days over the summer after a pelvic infection went septic. This was after offseason surgeries on both his right and left ankles, emergency surgery on his spine and a tear in his left pectoral muscle — all since January.

“When he left, I kind of started thinking, ‘I just hope I get the opportunity to play for this man again, play for this university,’” Frazier said.

The Wildcats were backed up on their own 16-yard line against Minnesota, hoping to capitalize on a 4-0 opening to the season and starting off an eventual 27-0 shutout against the Golden Gophers.

During that first play, Frazier set up across from Minnesota’s Steven Richardson. At the snap, Frazier scrambled past Richardson to block inside linebacker Cody Poock. He missed, yielding to the turf beneath him.

“He had several really, really good blocks (during the game), but nobody notices that kind of stuff for an offensive lineman,” Cushing said. “What you did notice was how he affected the group, just his attitude.”

This was his first play of the season, a departure from last year when the 6-foot-4-inch, 295-pound Bourbonnais, Illinois, native started all 12 games. Until this season, Frazier had started every game since the Nov. 2, 2013 matchup at Nebraska.

“He’s a leader,” he said. “I’m just incredibly inspired and happy for Matt.”

Oliver, who has been Frazier’s roommate for the past two years, visited him several times in the hospital. Many of those times, Frazier wasn’t even awake, Oliver said.

“Just whenever he would wake up and just see a friend there or see his family there, I think that helped him push through it just that much more,” he said.

Oliver and Frazier have been close friends since freshman year, when they lived in the same dorm. Frazier is a guy who’s there for you, Oliver said. And that extends to the field — the left guard has stepped up vocally and can build up trust in the offense, especially with senior lineman Geoff Mogus currently struggling with injuries, Oliver said.

Cushing, who recruited Frazier out of high school, said Frazier has surpassed expectations as far as getting himself back on the field. Cushing said Frazier’s rehabilitation process came with daily hard work. After Cushing saw him in the hospital after days of not eating, the assistant coach said Frazier was adamant about his nutrition regimen.

Frazier tends to be hard on himself and has high standards on the field, in class and in the weight room, Cushing said.

Frazier’s attitude, which Cushing calls “infectious,” was missed on the field.

“We kind of took that for granted not having him in there just as a leader,” senior superback Dan Vitale said after Saturday’s game. “It’s great to have him back.”

Before the game, Frazier brought the rest of the position group in and gave a speech that brought junior offensive lineman Eric Olson to tears, Olson said.

The talk centered on Frazier’s hope while he was in the hospital that he would play again.

After Saturday’s game, Fitzgerald said Frazier would probably take the press conference seat and say that he didn’t play well during Saturday’s game.

Frazier said being able to play last week was a great feeling, but that he can’t be emotional this week. Against a strong defensive line in the Michigan Wolverines, Frazier said he’s looking to improve.

“I hope I can continue to inspire some people, but I have to start performing now up to my capabilities,” he said. “But it feels good. It feels good to be back and get going again.”