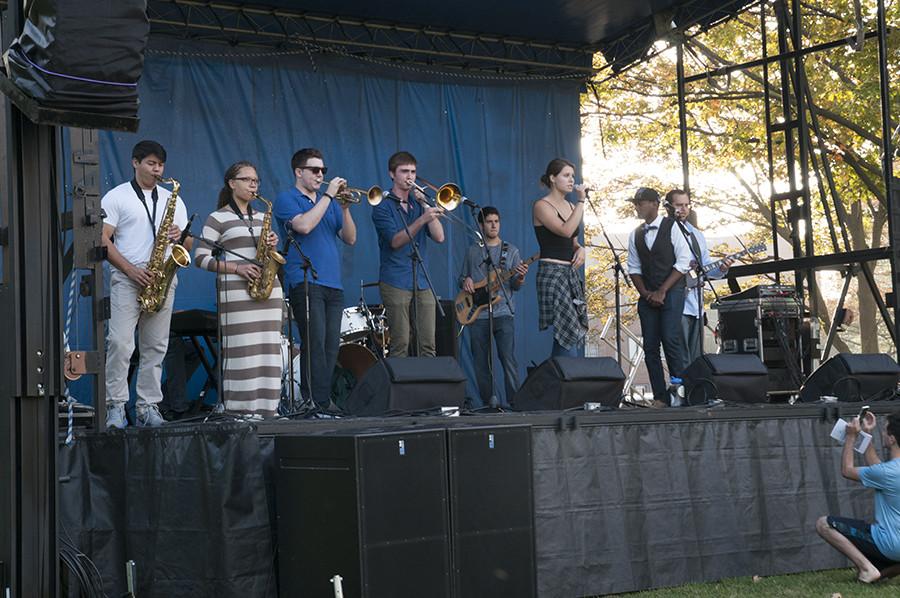 The Syndicate performs at the Deering Days on Sept. 25. The band is in the process of recording a new video album.

Music can be heard at Northwestern constantly, but one band of music and non-music students alike is looking to transform the music scene at NU — and far beyond.

The Syndicate, formerly Syndicate 119, formed in 2013, out of Bienen and Medill senior Thaddeus Tukes’ desire to make music outside of the practice room. Tukes’ classmate and long-time musical partner Kamila Muhammad, a Bienen senior, joined other friends and jazz students and began practicing songs Tukes had written. The band grew from there.

“We opened it up to some other people in the jazz program, and we had our first rehearsal in 119 Regenstein Hall,” Tukes said.

Recently, the group created a video album called The Syndicate Live to showcase its music and energy. The band recently gave two performances to collect footage for the album, which, rather than being solely based on studio recordings, shows the group in action with a live audience. Alex Warshawsky, a Bienen junior and The Syndicate’s bassist, took the forefront on the project.

“We wanted to capture that fun energetic vibe in the basement for video and recording purposes,” Warshawsky said.

Warshawsky said the band plans to release the album on YouTube to grow an Internet following. He hopes this will help the group break into the Chicago music scene.

“Hopefully that’ll be the Internet presence we need to move forward,” Warshawsky said. “You need something, so hopefully this will be it for us, the beginning of it, at least.”

Since forming, The Syndicate has morphed multiple times as members graduated and the group’s name changed.

This past April, the group competed in and won Battle of the Bands, a Mayfest tradition that selects a student band to perform at Dillo Day. Tukes, who had played on the Dillo Day stage two years in a row, was asked to judge the competition and was therefore unable to perform.

Lead vocalist and Communication junior Sage Ross said the group had a large enough repertoire to perform without Tukes but missed his presence onstage.

“It didn’t feel weird performance-wise,” Ross said. “But it did feel weird member-wise without Thaddeus.”

Despite his absence from the group’s Battle of the Bands performance, Tukes does appear on the new album and is looking forward to the release.

“It’ll be good for us to hear, to keep us on our A-game,” Tukes said. “I haven’t seen all of the footage yet, but I’m excited to see how it turned out.”