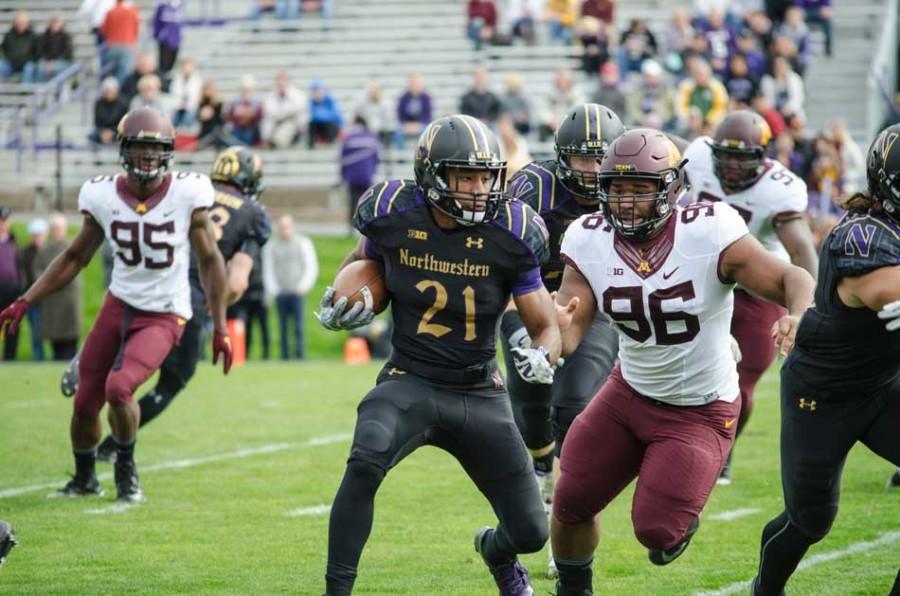 Sophomore running back Justin Jackson searches for room to run. The Cats will need a big-time performance from the nation’s No. 10 rusher as they take on the No. 5 rushing defense in the country in Ann Arbor on Saturday.

No. 13 Northwestern (5-0, 1-0 Big Ten) can’t focus on its unblemished record or recent shutout victory against Minnesota if it wants to have a chance against Big Ten rival No. 18 Michigan (4-1, 1-0) on Saturday, coach Pat Fitzgerald said.

Fitzgerald did nothing to downplay the challenge of playing against Michigan’s defense at his weekly press conference Monday afternoon.

“All (we) need to do is pop on the tape and know that we are playing an outstanding football team,” Fitzgerald said. “They have a very veteran group, a group that dominated us a year ago. They’re one of the best — if not the best — defenses in the country, and it’ll be a terrific challenge for us offensively.”

Fitzgerald specifically noted the activeness of Michigan’s linebackers and secondary as well as the high level of experience in the defensive unit.

With so many veterans, the Michigan defense will look eerily similar to the squad that NU faced — and lost to — last season. Michigan allowed NU only 9 points in the 2014 matchup, stopping NU’s 2-point conversion attempt to win the game late in the fourth quarter.

And it seems that Michigan’s defense has only improved. Michigan is ranked second in the country in total defense, allowing opponents just 3.1 yards per play.

The strength of NU’s offensive line will be critical on Saturday in giving redshirt freshman quarterback Clayton Thorson enough time to safely deliver the ball.

Luckily for NU, last week’s return of senior offensive lineman Matt Frazier will be a huge asset to the group as it faces the Michigan defense.

Frazier, who addressed the media on Monday, has had a year filled with serious injuries, surgeries and illnesses, including a 10-day stint in the hospital for a septic infection.

Senior cornerback Nick VanHoose said Frazier’s return is instrumental in both the play and morale of the entire squad.

“If you get a guy who loves playing football, loves what he’s doing, it’s great to have him come on the field because it basically just spreads like wildfire,” VanHoose said.

Frazier, who described his return as “emotional,” said it’s time to shake that off and focus on Saturday’s matchup.

“Can’t be emotional this week,” Frazier said. “The rust is shaken off. I didn’t play that well last week, and I’m looking to improve this week. This is a good D-line, and we’ve got to have all guys playing on all cylinders.”

Historically, NU has experienced a slump in October, probably not coincidentally coinciding with an uptick in players’ academic load. Fitzgerald said this year, it shouldn’t be a problem.

“We are starting to roll into first round of midterms and papers being due this week, so our guys got to time manage,” Fitzgerald said. “They got to be on top of their business. Football’s not an excuse for academics, and academics isn’t an excuse for football.”

Fitzgerald said the key to getting a victory on Saturday will all be in the preparation.

“We are far, far from what I believe we are capable of in all three phases,” Fitzgerald said. “It’s going to be a great challenge this week.”