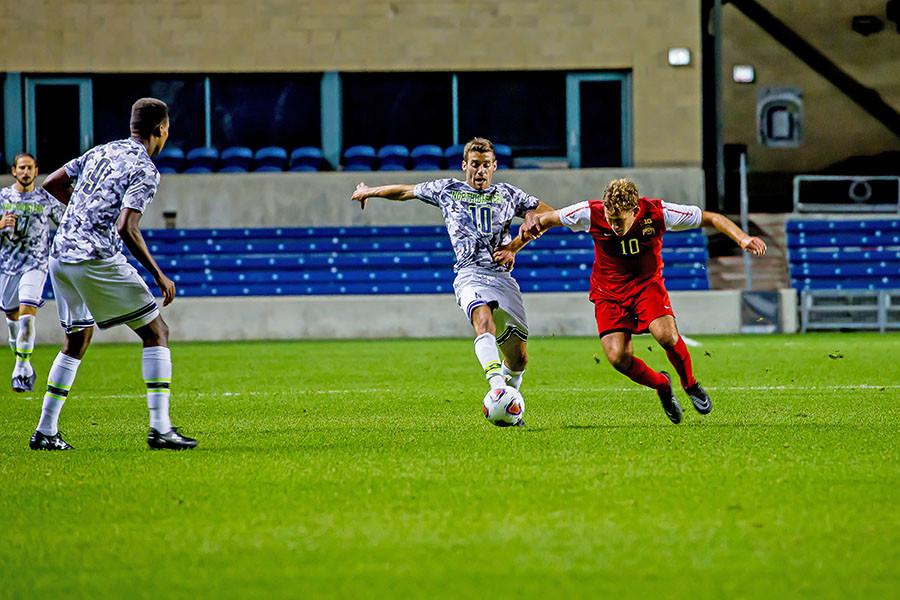 Senior forward Joey Calistri battles for the ball. The results haven’t been there through a tough stretch of the schedule, but the Cats are hoping their solid play will lead to a breakthrough against No. 13 Maryland.

With a record lagging below .500, Northwestern does not appear to be in the best shape heading into its clash with the University of Maryland this Friday in College Park.

“We’ve dramatically improved from where we were during our opening trip to the West Coast,” he said. “We feel that once we put a complete game together, we will be where we want to be.”

The sentiment that the team does not need dramatic adjustments seemed to be echoed in the mood at Wednesday’s practice. No one was hanging their head, and there was certainly no sense of panic.

Too often casual fans get caught up in results of a team, not taking as hard of a look at the process, said coach Tim Lenahan.

“You can’t look too into the box score, as it doesn’t really indicate level of play,” Lenahan said regarding the recent loss to Indiana. “A close loss to a good team does not indicate poor play.”

When one looks further at some of the opponents NU has already faced, namely Indiana and Michigan, two of the best teams in the Big Ten, the Cats’ record looks much more respectable.

Lenahan said he is not troubled by the team’s play.

“If you don’t watch the games, it’s easy to assume that conceding early indicates a poor level of play, but if you look at the UIC game, we just gave up an early goal while we were playing well,” he said.

Lenahan also agreed with the assessment that NU has played some very good teams so far, adding that Indiana is arguably one of the greatest programs in the history of college soccer, and he expects to see a number of their players playing professionally next year. Michigan isn’t doing shabby either, with two of its players earning Big Ten distinctions this week.

The team that the Cats face Friday, No. 13 Maryland (4-2-3, Big Ten 1-0-2), will not present much of a reprieve. Fresh off a 4-1 road thrashing of Wisconsin, the Terrapins have already taken down the previously top-ranked UCLA on the road at the beginning of September.

The Terps are led by midfielder Tsubasa Endoh, a Big Ten Preseason Player to Watch, and are hoping to win their fourth consecutive conference championship.

As with NU, Terps coach Sasho Cirovski said he is happy with his team’s process thus far, and the team hopes to keep up the offensive intensity going forward against the Cats.

“We have been working on our attacking ideas, and developing the relationships between our forwards,” he said.

Despite the challenging opponent, Calistri said the Cats feel optimistic heading into this game.

“There are no specific adjustments we need to make,” he said. “We’ve got a lot of leaders on this team, not just seniors, and as long as we perform at the level we know we can, we will play well.”