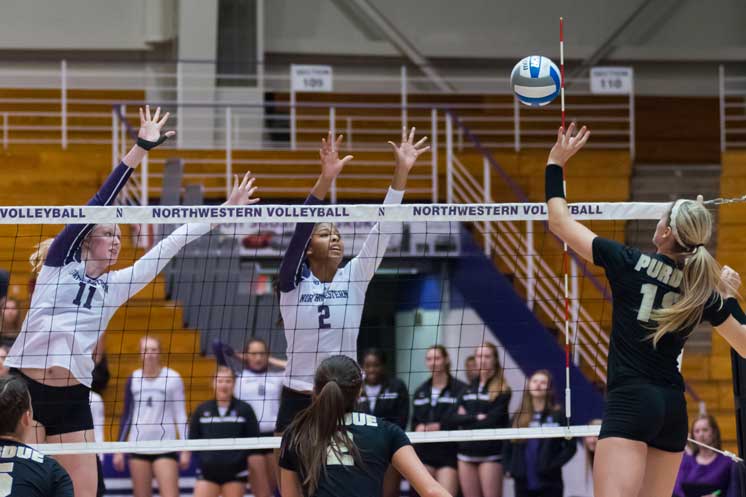 Sophomore hitter Symone Abbott and the rest of the Northwestern offense struggled mightily against Minnesota, snapping their five game win streak. Abbott finished with more errors than kills for only the third time in her career.

During a night when Northwestern’s offense was mostly held in check by No. 16 Minnesota, freshman Rachael Fara was the biggest bright spot.

Starting her first match of the season, Fara tallied nine kills Wednesday night — tied for second most on the team — and led the Wildcats (10-4, 2-1 Big Ten) in attack percentage with .375 — by far the best of the night. Junior Kayla Morin was the only other NU player to post a percentage higher than .200.

Despite Fara’s career night, she wasn’t completely happy with her performance. Fara said a better effort from her could have swung a few extra points in NU’s favor. She said she would improve upon Wednesday’s performance.

“I definitely got better throughout this match,” Fara said. “At the beginning I was a little rough, but I hope that I’ll continue to increase my shot range and become a go-to player. That’s (the goal) I set for myself, but I understand I have to be patient with it and it’s not going to happen overnight.”

Wednesday’s match was an offensive slogfest for both teams, as the Cats and the Golden Gophers (10-3, 2-1) were each less efficient than normal. Coming into the game, Minnesota’s attack percentage ranked fifth in the Big Ten at .266, while NU sat ninth in the conference with .244. When the evening concluded, the teams managed only .180 and .145 for the match, respectively.

The Cats felt after the game that they played and matched up with the Gophers well but ultimately lost due to close plays and tough calls. Even though NU outblocked a great defensive team in Minnesota, the Cats couldn’t pull through with a win.

“We fought hard, but in the end we need to focus in those critical moments,” Morin said. “Minnesota was just really scrappy, and they did a great job attacking-wise, mixing up their shots, and then defensive-wise they were all over the court making it hard for us to put the ball down.”

A startling indicator of NU’s offensive ineffectiveness was that sophomore Symone Abbott totaled more errors than kills for only the third time in her career and the first time since Oct. 15, 2014 against Nebraska. In 30 attempts, Abbott, arguably the most talented Cats hitter, leveled seven kills with eight errors equaling a -0.33 attack percentage.

“We’ve been on the road forever and we couldn’t convert,” Chan said. “The close plays are the difference between winning and losing on the road. You don’t have the crowd and you know you’re not sleeping in your own beds, and I give Minnesota a lot of credit.”