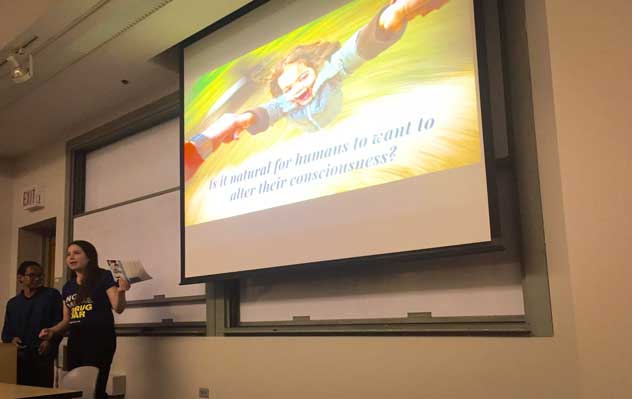 Students for Sensible Drug Policy present questions to the audience about the purpose and use of drugs. The first event of the year kicked off with a discussion exploring the benefits of legalization.

With a goal to advocate compassion rather than neglect toward drug users, the organization took its first steps toward welcoming fresh faces to the table.

Weinberg senior Caroline Naughton, NU’s SSDP chapter co-president, facilitated the discussion. She said she met major legalization activists and that inspired her to take on an executive board role.

“I got really engaged with the whole movement,” Naughton said. “That’s what really motivated me to stay involved.”

Naughton also discussed drug use on campus, specifically how the university’s Responsible Action Protocol governs students dealing with drug- and alcohol-induced emergencies. In August, the University expanded its amnesty policy to include drug-related incidents. SSDP had petitioned for such a change in May.

She began the meeting with a question for attendees: Is it natural for humans to want to alter their consciousness? After all, she said, numerous cultures have historically utilized drugs for religious and ceremonial purposes, and some even raise the point that drug use fosters creativity.

Throughout the discussion, members examined the idea of “managed use,” that there can be a happy medium between abstinence and drug abuse. Members who stand behind this philosophy argue that drug prohibition can actually be a more detrimental stance as it encourages underground markets, provides for little regulation and facilitates serious violence.

“On principle, our job in advocating for policy around drug use is that of harm reduction which gives education, resources and all the tools necessary to make the correct decision,” Weinberg junior Anna DiStefano, SSDP’s treasurer, told The Daily. “Ultimately, it’s up to the individual whether they want to use these tools or not.”

Much of the event, titled “Why We’ll Win the War on Drugs,” focused on efforts by the U.S. government to crack down on drug use and the increases in incarceration that have followed.

SSDP has about 200 student-run chapters across the U.S., all advocating for more lenient drug policy. NU’s chapter was relaunched in 2012 after discontinuing in 2009.

“We’re welcoming a lot of different perspectives,” he said. “We’re not necessarily telling people that this is the way you need to think it should be.”