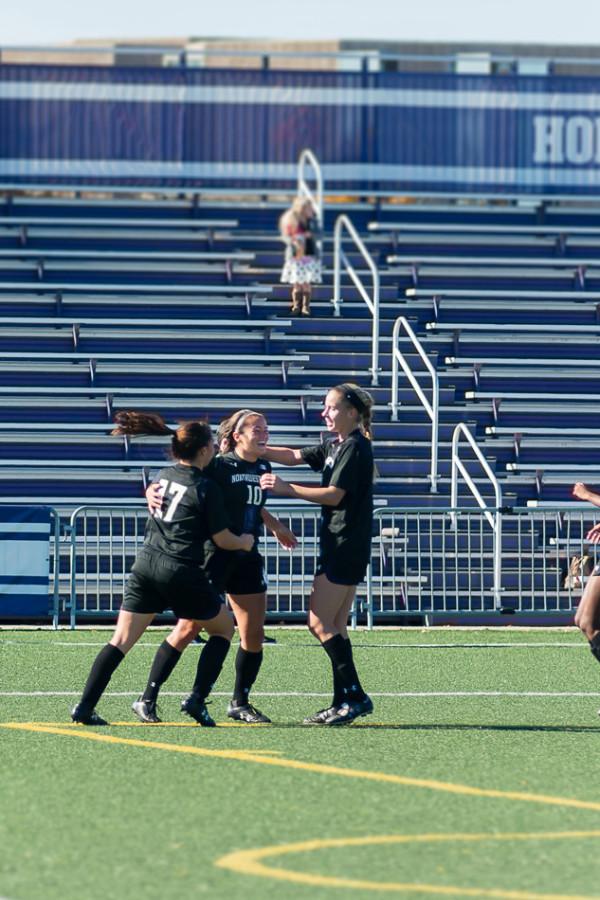 Junior Maria Grygleski and a pack of Wildcats celebrate a goal. Northwestern continued its record-setting start to the season with an overtime victory over No. 11 Rutgers.

Nandi Mehta knew as soon as the ball left her foot that she had done it.

“There was no way it wasn’t going into the back of the net,” she said.

And with that powerful strike off of a corner kick less than three minutes into overtime, the senior midfielder scored the goal that had eluded Northwestern (9-1-2, 3-0-1 Big Ten) in regular time and handed the Wildcats a victory over No. 11 Rutgers (8-2-0, 1-2-0) Sunday, 1-0.

Junior midfielder Rachel Zampa received a corner in the box and avoided pressure before sliding the ball back out toward the top of the box, where Mehta and fellow senior midfielder Niki Sebo were waiting. With Sebo’s back turned to the goal, Mehta chose to pounce on the chance.

“I was just sitting at the top of the box and saw the ball coming my way,” Mehta said. “I called Niki off it, lowered my head and let it go.”

Her golden goal secured the victory for NU in what was a defensive battle royale. With the two teams in the top five nationally in goals allowed per game, it was no surprise that the game needed extra time and a set piece to see its first score.

The best chance of regular time came in the 31st minute, when Rutgers forward Colby Ciarocca nodded a lofted cross into the box past Cats sophomore goalkeeper Lauren Clem but was ruled offsides on her run, nullifying the goal.

The Cats dictated play in the second half, totaling six shots compared to one for the Scarlet Knights. Junior forward Addie Steiner, who scored a brace in Thursday’s match against Maryland and leads the team in goals, got free to shoot several times but wasn’t able to finish any of her four second-half shots.

Coach Michael Moynihan thought his team was taking control in the second half of the game.

“We had more energy than they did, and we were close to ending the game at the end of the second half,” he said, referring to a tantalizing 90th-minute cross whipped in by senior defender Jennifer Korn that deflected twice off NU players in front of the net before freshman defender Kayla Sharples shot it over the net.

Mehta acknowledged the Cats, who have struggled at times this season to finish chances, had a rough time getting through a sturdy Rutgers defense.

“They’re really difficult to break down in the run of play,” she said. “They’d drop really deep immediately every time we won the ball, which made things tough.”

But NU stayed organized and wasn’t lured into sending too many players forward in search of a goal and leaving themselves exposed to dangerous counterattacks from the Scarlet Knights, who were shut out for the first time this season in the match.

That defensive effort gave the Cats time to build pressure and set the stage for Mehta’s wonder strike in overtime. Riding an eight-game unbeaten streak into next week’s showdown with No. 12 Penn State, the senior is embracing the challenge of meeting expectations in what could be a historic year for NU.

“This is the best we’ve ever been,” she said. “Anything can happen.”