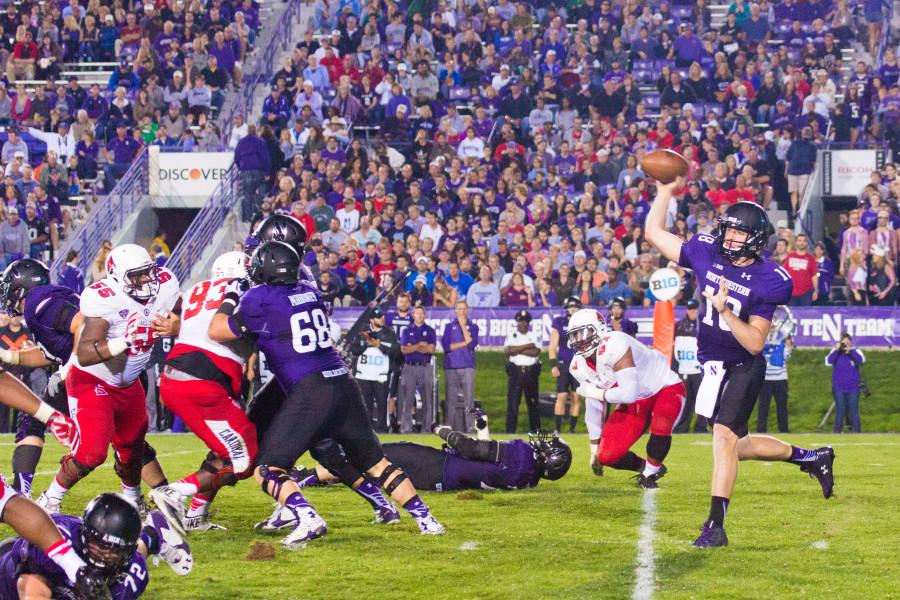 Clayton Thorson fires a pass downfield. The redshirt freshman struggled in the first half but rebounded to engineer two 80-yard touchdown drives in the third quarter.

Pat Fitzgerald didn’t worry about his offense at halftime Saturday. Instead, he occupied himself with special teams personnel, leaving the position groups to discuss a first half that ended with Northwestern trailing 10-7.

“We didn’t have to make a whole lot of adjustments,” Fitzgerald said afterward. “We just had to go out and play.”

Apparently no motivational speech was necessary. Northwestern earned 17 points in the third quarter en route to a 24-19 win over Ball State.

It was a dramatic turnaround.

In the first half, the Cats committed one offensive miscue after another. Redshirt freshman quarterback Clayton Thorson fumbled after a 13-yard run. He threw an embarrassing interception on a miscommunication with senior receiver Miles Shuler (that he later took blame for). He panicked after a bad snap and fumbled again. On the quarterback’s best throw of the half, Shuler let a would-have-been touchdown fall through his arms.

NU entered halftime with 200 yards of total offense but only 7 points.

But Thorson and company emerged from halftime looking like a different offense. The quarterback engineered an efficient eight-play, 80-yard drive that ended with a 21-yard touchdown pass to senior superback Dan Vitale.

Then, after the NU defense promptly stopped Ball State, Thorson marched the Cats down the field again, eventually floating a perfect pass to junior receiver Austin Carr for a 25-yard score. On NU’s next drive, a 62-yard run from sophomore running back Justin Jackson set up a field goal and a 24-10 Cats lead.

Thorson went from pariah to hero by the third quarter’s end. After the game, he denied any magic adjustment, crediting focus and attention to detail.

“I just started going through my progression,” he said. “In the first half, I was just guessing a little bit and I just wasn’t doing what I’m coached to do. In the second half I started to do that and it started to work. It’s funny how that works out. Things started working out for us.”

The offense slowed in the fourth quarter (a missed field goal didn’t help), but the big third quarter was enough to deliver a narrow victory.

Thorson’s Jekyll and Hyde act offers simultaneous cause for optimism or pessimism. Ignore those three first-half turnovers, and the redshirt freshman’s final line, 18-31 for 256 yards and three touchdowns, looks great.

On the other hand, those giveaways could have cost the Cats the game.

“We cannot turn the ball over like we did,” Fitzgerald said. “Our defense was on the field way too long today for us to be able to expect to be successful consistently. There’s a lot of room for improvement (on offense), especially taking care of the ball.”