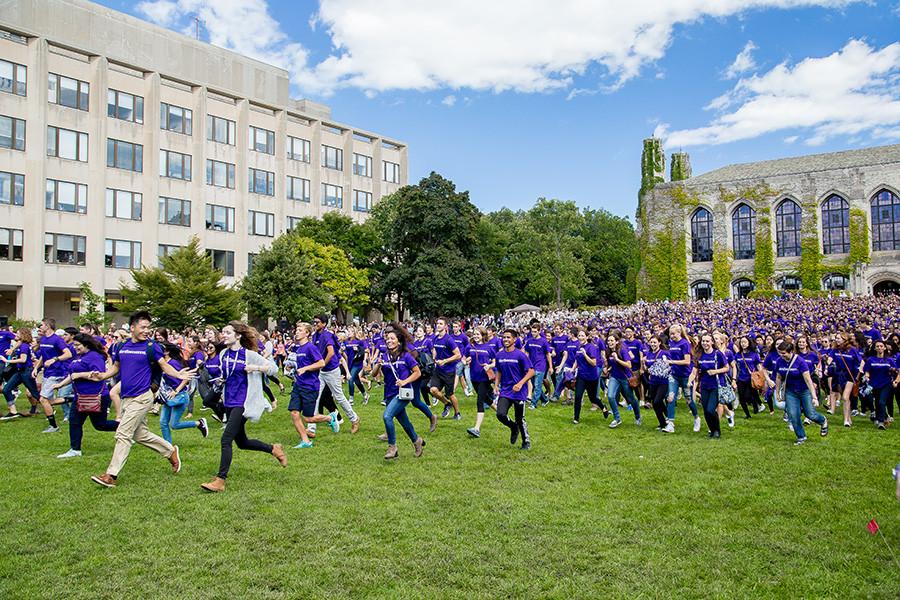 New Wildcats dash across Deering Meadow this Wildcat Welcome prior to taking their class photo. Among the incoming students, the proportion of international students hit a record high this year.

Before coming to the United States from Thailand, McCormick freshman Akhil Shanishetti had never attended an American football game. He finally got his chance at the game against Eastern Illinois University this month during Wildcat Welcome, running with the rest of his new classmates as part of the Wildcat Dash tradition before kickoff.

Shanishetti is just one of the 1,700 undergraduate and graduate international students Northwestern welcomed this year — a record for the University, said Ravi Shankar, director of the International Office. This increase brings NU one step closer to achieving its globalization goals set in the University’s strategic plan, he said.

“Globalization includes how the University goes about increasing financial aid for international undergraduate students, where we should be in the world and how we globalize the curriculum,” Shankar said. “It’s a steady planned growth of international students.”

Since the plan was announced in 2011, international enrollment has been on the rise, according to NU’s 2014-2015 International Student and Scholars Statistics report. NU’s international population has increased to more than 6,000 undergraduate and graduate students compared to 4,329 last year.

NU administrators said this is largely due to four factors: intensified efforts to reach out to international communities, increased financial aid, effective pre-orientation programs and a supportive on-campus environment.

“Our exposure is better than ever before,” said Michael Mills, associate provost for University enrollment. “We travel more internationally to recruit than we ever have.”

“Morty has helped in an interesting way,” Mills said. “He travels so much internationally, and he’s always hosting events for alumni and prospective students. He also meets with the editorial boards of a lot of international papers and T.V. stations.”

As a result of his efforts, Shankar said Schapiro has helped establish NU’s brand internationally.

“It’s been a great marketing success in terms of defining who we are,” Shankar said. “People recognize Northwestern, probably not to the degree that we want them, but at least it’s happening.”

In 2009 — Schapiro’s first year at NU — he made 21 trips abroad, speaking at and attending events across Asia, the Middle East and Europe. The President’s Office was unable to provide the latest figures on Schapiro’s international trips as of Sunday evening.

With international students making up 10 percent of the freshman class — also an all-time high — the University is holding its own against its peer institutions, Mills said.

“We’re right about where we want to be,” he said. “We’re pretty close in our peer set to the median in terms of international students in the undergraduate student body. If we can sustain this, then we’ll have a really international undergraduate population, which would be great.”

The University’s academic reputation is one of the main reasons McCormick sophomore Rohil Bhargava, who was raised in Malaysia, decided to transfer from University College London.

“The engineering program at UCL wasn’t as strong as it is here,” Bhargava said. “The facilities were comparable to my high school, and I felt at university you’re supposed to take your education to the next level.”

Despite being attracted to NU, international students still have to face the challenge of adjusting to attending an American university, said Weinberg freshman Celia Hauw, who grew up in Singapore.

“People are generally very nice, but obviously they act in a different way compared to Singaporeans. So it takes a bit of getting used to,” Hauw said.

NU In sends University representatives to the countries with the highest amount of incoming students to brief them about life in America, preparing for college and other NU-related topics. ISO is an on-campus orientation program, which takes place a few days before Wildcat Welcome.

“Those orientations have mostly become networking and social activities,” Shankar said. “The international peer advisors are the ones who really run that because we found that it’s best to be in a small cohort to develop a network and really socialize.”

Melania Hidalgo, a Medill freshman from Spain, said she enjoyed connecting with fellow international peers and finding friends early on.

“ISO was a way for the international kids to recognize each other and see where we all came from,” Hidalgo said. “It was good in terms of not feeling alone later when you get overwhelmed by all the more American types of events.”

In addition to having an established group of friends, support for international students continues after the orientation period is over, Shankar said.

Shanishetti, the McCormick freshman, said he felt the International Office’s programs were essential in making it easier for him to get used to campus life.

“It wasn’t difficult to make a transition because there was a huge supportive community,” he said. “As soon as I came on campus there were people to help me with things such as moving in and getting accustomed to things around campus. The transition, though it was overwhelming, went smoothly.”

To continue increasing international enrollment, Mills said administrators plan to maintain connections with international high schools and college advisers. He also said the University is in contact and hoping to receive donations from overseas benefactors.

“The most brilliant international students aren’t just in the most affluent families,” Schapiro told The Daily in January. “They’re spread across the income distribution, just like they are here in the U.S.”

One of these prospective benefactors is an influential Chinese real estate couple who set up a $100 million education fund to send Chinese students who otherwise could not afford the price tag of elite American universities. Pan Shiyi and his wife Zhang Xin have already made a $15 million gift agreement to Harvard.

“Morty has met with this couple and is optimistic that they might include us,” Mills said. “I know he’s hopeful, and if we get that, it would be fantastic.”

This donation would be the second major contribution toward NU’s international studies program. Last year, roughly $20 million of the more than $100 million from Roberta Buffett Elliott’s donation to the University was set aside for a scholarship fund for international students.

“Northwestern provided the best financial aid for my family, which was really important,” Shanishetti said. “It’s amazing that a university of such a high reputation could provide resources for international students because it not only caters to local American students.”