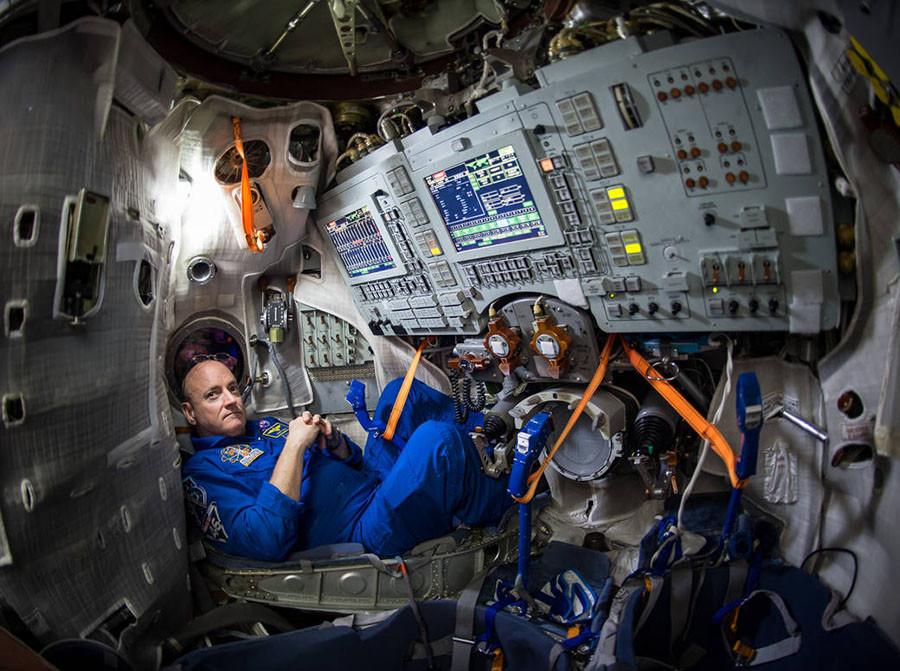 Astronaut Scott Kelly lounges inside a Soyuz simulator. Kelly went into space in March and will become the first American to stay at the International Space Station for more than 215 days.

A Northwestern research team observing two twins — one spending a year at the International Space Station while the other stays on Earth — in a study of long-term stay in space, will reach the six-month mark on Sept. 27.

Scott Kelly was launched into space in March while his twin brother Mark Kelly, a retired astronaut, remains at home as part of a NASA-coordinated study about twins conducted by NU and other universities. Scheduled to return home in March 2016, Scott Kelly will become the first American to stay in space for more than 215 days.

The University is part of one of 10 research teams each studying a different aspect of the twins’ health. NU is collaborating with Rush University Medical Center and the University of Illinois at Chicago to examine the effects of an extended stay in space on bacteria in the human gastrointestinal tract.

Biology Prof. Fred Turek, a member of the NU team, said the team is collecting the twins’ fecal material to study the bacteria. Changes in the gastrointestinal tract have been linked to disorders in the gut as well as cancer, obesity and diabetes, he said.

Two fecal samples were collected from each twin before the March launch, Turek said. Three more sampling times are scheduled while Scott Kelly is in space, followed by two more after he returns home, Turek added.

“The microbiota are important for human health and disease, (but) we have no idea what is the effect of the space environment on the microbiota,” Turek said.

NASA scientist Craig Kundrot (Weinberg ‘82), who initially coordinated the research project when it began, said Scott Kelly will receive a flu vaccination at the end of this month. Kundrot — currently the life sciences lead at NASA’s Office of the Chief Scientist — said the vaccine is being administered a total of three times, with the last one to be given after Kelly returns home. Scientists will draw Kelly’s blood to study the effects of the vaccine on his immune system, Kundrot added.

Most of the research project revolves around collecting samples from the twins, which are being frozen until Scott Kelly returns to Earth, Kundrot said.

Although Kundrot is no longer involved with the twin study on a day-to-day basis due to his new position, he said sample collection for each of the twins has been going well.

Neurobiology Prof. Martha Hotz Vitaterna, one of the NU researchers, said the 10 teams will analyze data at the same time after Scott Kelly returns home. The NU team is currently working on improving analysis techniques and sequencing technologies in preparation for data analysis.

“These are extremely valuable samples, irreplaceable basically, so we want to make sure we do the best thing possible with those samples,” Vitaterna said.