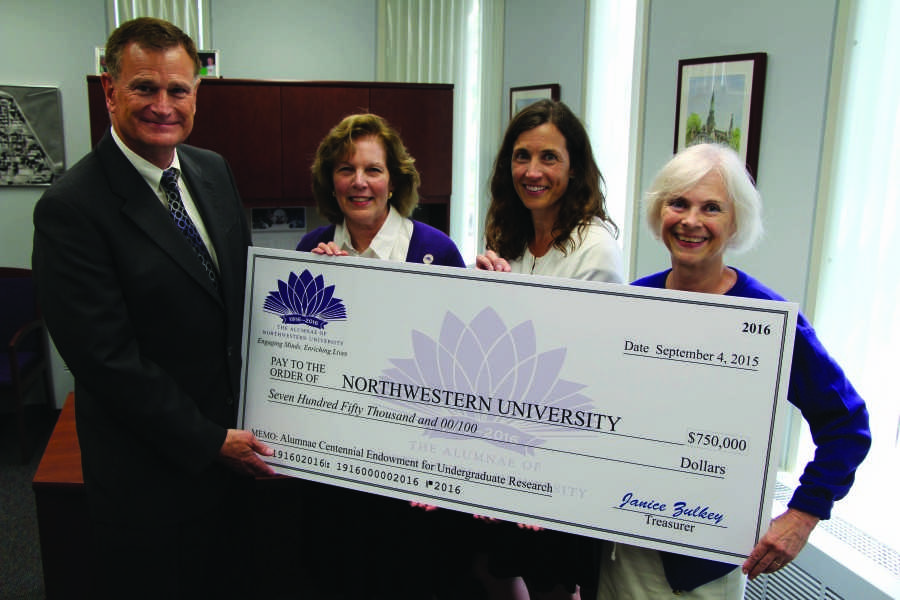 Undergraduates hoping to participate in research will soon have more opportunities due to a donation from The Alumnae of Northwestern University.

The group, a volunteer organization of women that raises funds for various projects at the University, will donate $1 million as part of its centennial celebration to create an endowment for undergraduate research at NU.

Founded in 1916, The Alumnae of NU has donated more than $7.5 million to the University in the form of grants, fellowships and scholarships.

Pam James (Weinberg ’71), chair of The Alumnae’s centennial committee, said the money from the endowment is going to the Office of Undergraduate Research for grants administered by the office.

The initial $750,000 gift was presented at the kickoff of The Alumnae’s centennial celebration at the Northwestern Alumni Association Leadership Symposium on Sept. 11, said Janet Bilandic, president of The Alumnae. Since then, the group raised another $100,000 from personal contributions toward the endowment, bringing its grand total to $850,000, she said.

The research grants are open to all NU students and will be administered by Associate Provost Ron Braeutigam and Peter Civetta, director of the Office of Undergraduate Research, Bilandic said. The Alumnae is able to give out many awards because it is made up entirely of volunteers, she added.

Each of The Alumnae’s directors made a personal gift to the endowment, and the organization will contact more women to raise the final $150,000, Bilandic said.

“Our members want to help undergraduates at Northwestern as their top priority,” Bilandic said. “We found out that undergraduate research is becoming almost a necessity in all areas throughout the school for undergraduates.”

“This money will be used largely in support of the Undergraduate Research Grant program, which funds students to do independent and creative projects in all fields,” Civetta said. “It will also help to fund the new Undergraduate Research Assistant Program, which funds students to work with faculty members on their research projects.”

In the last six years, the number of students funded by the Office of Undergraduate Research has more than tripled and about $1 million was awarded last year alone, Civetta said.

“(The endowment) is going to help us significantly to meet the rising demands of students,” Civetta said.

The Alumnae also selected eight female sophomores to receive scholarships for excellence in science, technology, engineering and mathematics, James said. The group used to give out four annual scholarships but was able to begin offering eight last year, she added.

James said The Alumnae modeled the STEM scholarships after the U.S. government’s SMART grants, which were created to complement the Federal Pell Grant Program. NU students can apply as freshmen or sophomores to receive their awards the following year, she said.

“(The scholarships) are for women or underrepresented minorities in the STEM disciplines,” James said. “The money is intended to allow the students to lessen their work-study load so they can make sure that their academics are in order and possibly doing something else in relation to that.”