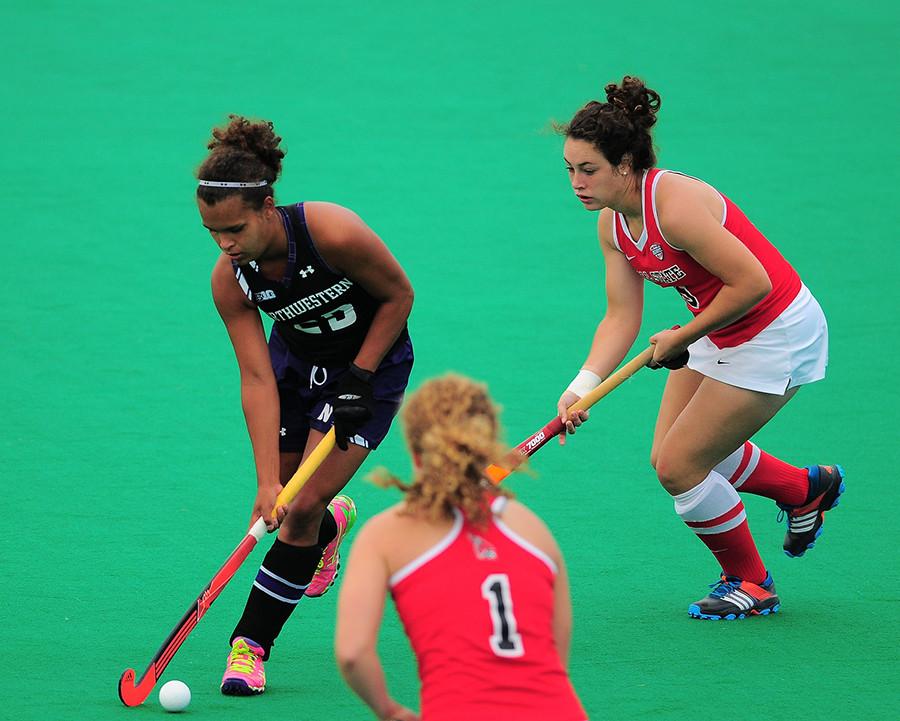 Junior Isabel Flens evades two defenders. Flens has scored 9 goals and added three assists in the first 10 games of the season to help NU to a 7-3 record.

With Northwestern’s first Big Ten Tournament victory under its belt, the Wildcats (7-3, 0-1 Big Ten) are primed to take a consecutive title.

Under the direction of coach Tracey Fuchs and minimal losses to graduation, NU is returning most of its starters. The major loss comes at the goalkeeper position with Maddy Carpenter graduating. She was replaced by sophomore Lindsay von der Luft, and the Cats have started strong in 2015.

Despite a solid record, with more than half of the season over, NU has seen mixed levels of success against high-quality opponents. The Cats started the season ranked No. 10 and opened the year with a 4-1 loss to top-ranked Connecticut. Among the other ranked teams the Cats have faced — Duke, Boston College and Maryland — they’ve come away with only one win but lost to the Blue Devils and Terrapins by just one goal.

NU lost to Maryland on Friday, but following that, NU tallied its second shutout victory against Temple on Sunday. The now-No. 12 Cats have shown their power against multiple teams including Drexel, University of California at Davis — winning those contests by four goals — and Central Michigan — the team’s first shutout, 7-0.

Offensively, through the first 10 games of the season, NU has recorded 36 goals averaged more than three goals per game.

On the defensive side, the Cats have allowed only 15 goals. Von der Luft has come into her own as a starting goalkeeper. Last year, she received minimal playing time behind Carpenter, finding herself in the net when an NU victory was imminent. Now a starter, the netminder has found herself against top competition and standing her ground.

With Big Ten play coming around the corner, Von der Luft will need all the experience she can get against top teams, as the conference competitions are always high-octane affairs. With the recent addition of Maryland, combined with the power of Michigan, Iowa and Penn State, the Big Ten is one of the top conferences for field hockey. After last season’s tournament title, NU has proven it is here to stay and should be a feared opponent.

This season presents a unique problem for NU: defending a Big Ten championship. To defend the title, the Cats will have to take command of the conference and be prepared to face off against Maryland — one of the greatest conference challenges — again in the postseason.