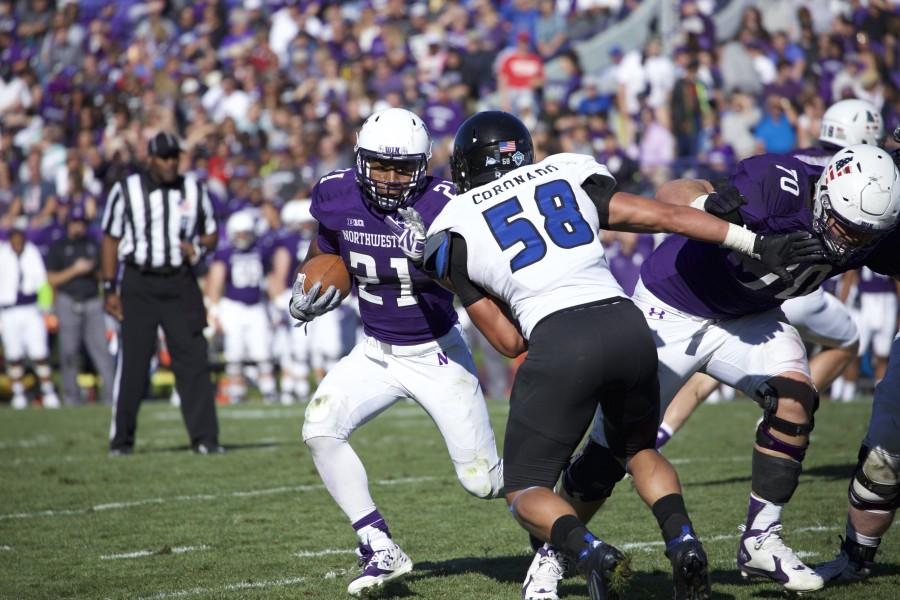 Running back Justin Jackson scampers past the Eastern Illinois defense. Jackson found the end zone for the first time this season Saturday afternoon, contributing to the Wildcats' lopsided victory.

With a redshirt freshman quarterback and a thin receiving corps, Northwestern entered the season knowing it would need to rely on its rushing game. And if the first two weeks of the season are any indication, the Wildcats’ running backs can more than handle the burden.

One week after accruing 225 yards on the ground against Stanford, NU racked up 344 during Saturday’s 41-0 win over Eastern Illinois.

Everyone from star Justin Jackson to little-used sophomore Corey Acker got in on the action, trampling Eastern Illinois from the first whistle to the final one.

“To be able to run the ball the way we did and for the yardage that we did,” coach Pat Fitzgerald said, “it was a pretty clean and pretty effective game offensively.”

Jackson scored NU’s first touchdown in the first quarter on an 11-yard rush.Then, with 6:12 to play in the second, junior Warren Long scrambled eight yards for a score. Later in the quarter, quarterback Clayton Thorson’s joined the fun, dashing eight yards (on quite the circuitous route) for his second rushing touchdown in as many weeks.

With the game well in hand in the fourth quarter, redshirt freshman Auston Anderson entered the game, carrying eight times for 59 yards before losing a fumble. Once Anderson had his turn, sophomore Corey Acker got a shot, followed by junior Tom Hruby, both of who found rushing lanes to help NU move down the field.

“You’ve got Justin, Warren, Solomon, but then you’ve got Auston, Corey and even Tom,” Thorson said.  “It’s nice to know you can hand off the ball and run for 344 yards.”

The performance of the running game was particularly impressive given the state of NU’s offensive line. Center Brad North, right guard Matt Frazier and right tackle Eric Olson all missed the game due to injury, and fill-in tackle Adam DePietro left with an injury.

But back-ups stepped in and cleared the way for Jackson, Long and company.

“We’ve got guys that can step up and carry the flag,” senior tackle Geoff Mogus said.

Going forward, Jackson still figures to receive the lion’s share of NU’s carries, but the Cats will benefit from mixing in other game-tested backs depending on the scenario. Fitzgerald said he considers Jackson, Long and Vault all reliable options.

“In my mind, we’ve got three established Big Ten running backs who can do a lot of different things,” Fitzgerald said.

And if they do all those things in one game, the Cats might just win 41-0.