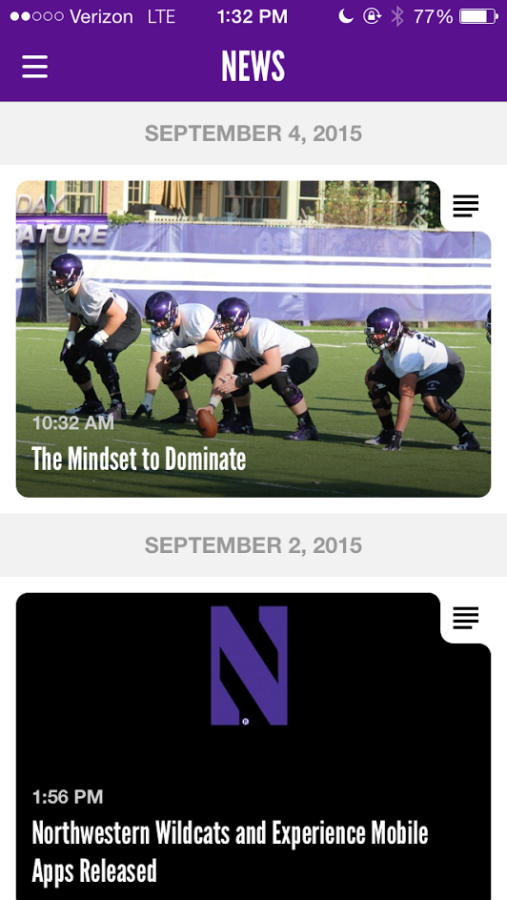 Wildcat fans now have a new smartphone application and weekly food trucks to look forward to this football season. And if they’re lucky, they could even score a photograph with coach Pat Fitzgerald.

The new smartphone application, titled Northwestern Wildcats, officially launched Wednesday for iPhones, with an Android release imminent, said Doug Meffley, the assistant athletic director of media services. The release is an upgrade from the old application, which featured live scoring and a roster, to a fully integrated experience, Meffley said.

All features will be operational for Saturday’s 11 a.m. football game against Stanford University.

“A lot of schools have an app or some semblance of an app for following the games, but not that many folks jumped on to the experience portion of it,” Meffley said.

The application comes with access to behind-the-scenes opportunities. The “Sideline Selfie with Coach Fitzgerald” package will give five fans a chance to walk onto the field two and a half hours before kickoff and snap a picture with the coach. The package tickets are sold in advance before each game to users signed up on the application.

Fans can pay for another photo opportunity with Willie the Wildcat, also limited to five per game. Also, up to 25 children, 12 and under, can pay to be a part of the high-five tunnel with the team.

Meffley said the application allows fans to have a real-time and interactive way to follow games, and it is connected to YouTube, Twitter and Instagram. Fans can also purchase seating upgrades in the middle of the game and enable push notifications for weather, scores, game-day traffic and more.

“It provides another avenue to connect to our teams,” Meffley said. “Everything we do is by app, if you go to movies or check in a flight. We need an app as well because that’s how people are used to … By integrating social media and video instead of separate content, it’s all there.”

Also kicking off for the season opener, upgrades to the Wildcat Alley tailgate will feature catering from four local restaurants. The pre-game event, hosted by Northwestern Athletics, will also be open to the public, starting three hours before kickoff on Saturday.

“It’s one of those things where every year we look around and see how we can improve game days,” said Ryan Chenault, the assistant athletic director of marketing and sales. “We resonated with food options and food trucks are very festival, and that’s the feeling we want to give to Wildcat Alley.”

The event, which has no entry fee, will feature appearances from other NU sports teams, NU Marching Band and local dance teams. The tailgate takes place north of Ryan Field, by the Sharon J. Drysdale softball field.

“It’s football. I’m always excited about football,” Chenault said. “Time will tell, but we’re excited … Initial feedback is that it’s awesome and they can’t wait, so I hope it will be well received.”