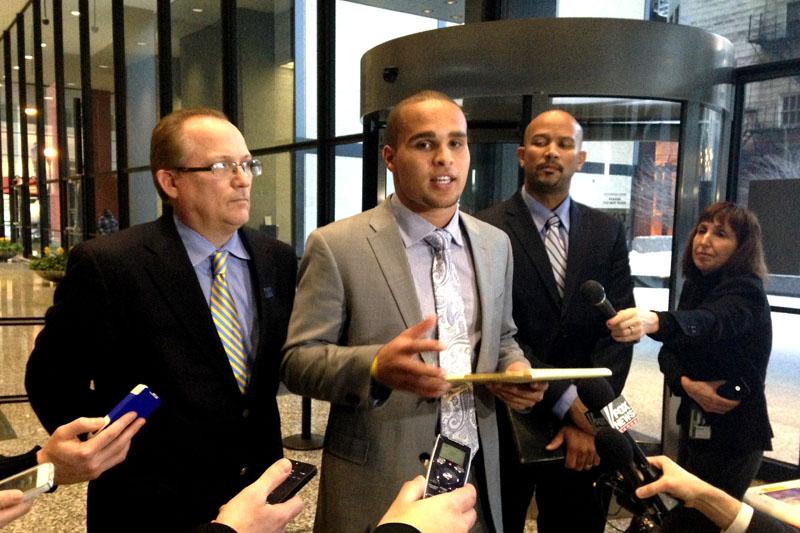 (From left) Tim Waters, Kain Colter and Ramogi Huma, were led the Northwestern unionization movement, which ended with the NLRB's decision Monday.

The National Labor Relations Board on Monday unanimously decided not to rule in the Northwestern union case, ending the 18-month long movement for NU football players to unionize.

The board did not actively overturn the March 2014 ruling from the NLRB’s Chicago regional director that the players were NU employees but declined jurisdiction, citing the impact an NU union would have on the NCAA as a whole.

“Asserting jurisdiction would not promote labor stability due to the nature and structure of NCAA Division I Football Bowl Subdivision (FBS),” the NLRB said in a news release. “By statute the Board does not have jurisdiction over state-run colleges and universities, which constitute 108 of the roughly 125 FBS teams.”

Because the Wildcats’ players are no longer legally employees, the votes cast during their union election last April will not be counted. The decision cannot be appealed.

Former NU quarterback Kain Colter, who spearheaded the union movement, tweeted that he was “Disappointed by the NLRB ruling. But can’t deny the positive changes that were brought about by athletes standing up. Proud of those guys.”

Disappointed by the NLRB ruling. But can't deny the positive changes that were brought about by athletes standing up. Proud of those guys.

If the prior ruling had been upheld, the NU players would have formed a union as the College Athlete Players Association. CAPA president Ramogi Huma said in a statement that Monday’s decision was “not a loss, but it is a loss of time,” pointing out that the board did not close the door on the union as a mechanism for change in college sports.

“It delays players securing the leverage they need to protect themselves from traumatic brain injury, sports-related medical expenses, and other gaps in protections,” Huma said in a statement.

United Steelworkers political director Tim Waters, who backed the union since its inception in January 2014, said the ruling was “just one hill to climb.”

“It’s very hard for athletes to take a stand at a place like Northwestern,” Waters told The Daily. “We applaud them for the fight that they made. We applaud Kain Colter. It’s not the first setback athletes have ever had.”

Waters said he was disappointed in the NLRB’s ruling, which came more than a year after the regional director’s initial decision.

“It looks like the NLRB tried to hit the snooze button on this one,” Waters said. “The ruling right now seems to say they think the NCAA is too big to fail or something.”

In a statement, NU spokesman Al Cubbage said the University was “pleased” with the ruling.

“As the University has stated previously, Northwestern considers its students who participate in NCAA Division I sports, including those who receive athletic scholarships, to be students, first and foremost,” Cubbage said in the statement. “We applaud our players for bringing national attention to these important issues, but we believe strongly that unionization and collective bargaining are not the appropriate methods to address the concerns raised by student-athletes.”

NU football coach Pat Fitzgerald, who has been critical of the union movement in the past, praised the players for their maturity.

“Our young men chose to attend Northwestern to compete on the field at the highest level, earn a world-class education and prepare for the rest of their lives,” Fitzgerald said in a statement. “They have displayed maturity beyond their years through this process, and the experience has unquestionably brought us closer together as a football family.”

Athletic director Jim Phillips, who is also chairman of the NCAA Division I Council, said in a statement the University will continue to prioritize player well-being.

“Our focus is, was, and will continue to be on delivering a world-class experience — academically, socially and athletically — every day for each of our 494 student–athletes,” Phillips said in the statement. “Both locally at Northwestern, and broadly as chairman of the NCAA Division I Council, it has been remarkable over the last several years to witness the rapid evolution of college athletics with student-athlete well-being as the top priority.”

After six days of hearings the next month, the NLRB’s Chicago office decided in favor of CAPA, ruling on March 26, 2014 that the players are NU employees. The University filed an appeal to the NLRB’s national office on April 9, which prompted Monday’s decision.

The board in its ruling made clear that “This decision is narrowly focused to apply only to the players in this case and does not preclude reconsideration of this issue in the future,” leaving the door open for another school — or potentially even NU again — to pursue unionization.

Waters said United Steelworkers will “without question” participate in similar cases relating to college sports in the future.

“The Northwestern players weren’t the only players out there looking to organize,” Waters said.