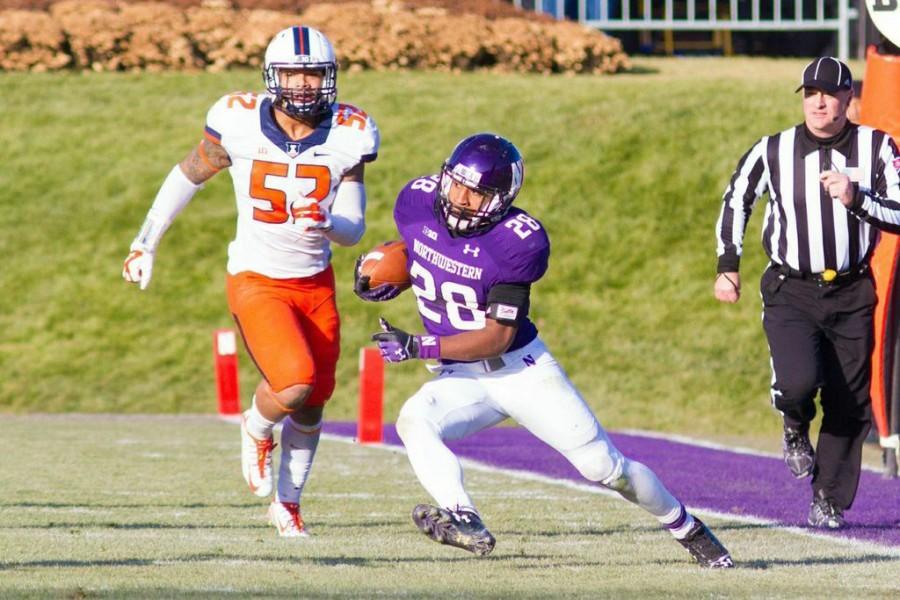 Sophomore running back Justin Jackson will look to build on an impressive freshman campaign when Northwestern kicks off Sept. 5.

One year ago, Justin Jackson was a true freshman with no guarantee of playing, let alone starting, during his first season in Evanston. At that point, Jackson was third at best on Northwestern’s running back depth chart, behind seniors Venric Mark and Treyvon Green.

Mark was suspended, then transferred, and Jackson quickly supplanted Green as the Wildcats’ starter on the way to a 1,187-yard freshman campaign.

Now, Jackson enters his second year at NU as arguably the team’s biggest star, one of 11 Big Ten players named to the conference’s list of preseason players to watch.

“I have the same mindset, I’m just more experienced,” Jackson said Wednesday. “I know the playbook, I know how things go in the Big Ten game, but I still have the mindset of I don’t know if I’m starting yet.”

NU coach Pat Fitzgerald said an offseason in the weight room will help Jackson build on his impressive debut campaign. All season in 2014 as Jackson put up gaudy rushing totals, the coach emphasized his room to improve, particularly in pass-blocking.

“Everything he did last year was without competing in spring ball and our winter workout sessions,” Fitzgerald said. “I really liked what I saw from him (this offseason).”

Jackson called pass-blocking “for sure” the area he most needs to improve.

“Last year was really the first year I had to do that,” he said, “the first year I’ve ever cut someone or anything like that. It was definitely a different experience going against 230-pound guys.”

As Jackson works on blocking behind the scenes, opponents will likely key in on the Cats’ ground game. All three of NU’s potential starting quarterbacks lack significant game experience, making Jackson especially crucial to the team’s offense. Last year he finished seventh in rushing yards in a ground-dominated Big Ten. This season he’ll be counted on to do even better.

Jackson, who said he’s fully healthy after a lower-body injury in the spring, said his personal expectations are always higher than external ones.

“I’m trying to be perfect on every play,” Jackson said.

Quarterbacks still under the microscope

NU has yet to choose a starting quarterback, but Fitzgerald said there’s a strong chance he’ll announce one before the season begins Sept. 5.

Of course, the competition between redshirt freshman Clayton Thorson, sophomore Matt Alviti and senior Zack Oliver won’t necessarily end when the Cats first take the field. Fitzgerald implied he’s open to a fluid depth chart, in which a second quarterback is prepared to play at a moment’s notice.

“Ideally you have 1a and 1b,” Fitzgerald said. “You have a starter and you have a young man who’s able to go in no matter what happens. We’ll see how that evolves.”

The Daily asked all three quarterbacks why they deserve the starting spot. Thorson and Alviti avoided the question, but Oliver made his case, saying he worked hard to develop his lower body during the offseason and his arm strength is “exactly where it needs to be.”

“I’ve been thrown in the fire. I have that game experience,” Oliver said. “My knowledge is better than it ever has been in the offense, and I think I have really developed great relationships with the players in the offseason so they can rely on me and I can rely on them.”

Linebacker competition heating up as well

While most external attention has focused on NU’s quarterback trio, the Cats’ depth chart at linebacker is just as up in the air.

Sophomore Anthony Walker will likely start at middle linebacker, but a number of players are competing for the two outside spots. Fitzgerald said Walker, junior Jaylen Prater and senior Drew Smith have been taking snaps with the starters this week, but the coach mentioned several others at the position who have caught his eye: junior Joe Jones, sophomore Brett Walsh and redshirt freshmen Cam Queiro and Nate Hall.

“We have better depth there than I maybe thought we had at the start of spring ball,” Fitzgerald said.

Matt Frazier out for week one