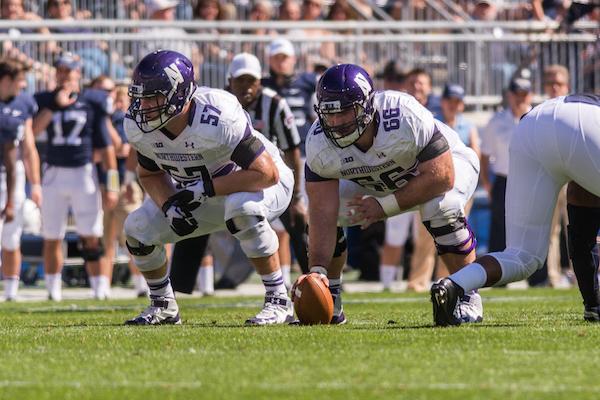 While media and fans focus on the quarterback competition, the position group that will most determine how the Wildcats perform in 2015 is the offensive line.

In 2014, constant pressure hampered the offense, particularly the pass offense. It doesn’t take advanced stats to see there were problems in multiple areas, but the numbers point exactly where the Wildcats need to improve.

Beyond being among the bottom four in the Big Ten in yards per carry, NU had an opponent-adjusted sack rate — sacks divided by the sum of sacks and passes, adjusted for opponent quality — of 85.8, according to Football Outsiders, ranking 89th in the nation. The Cats were sacked at a rate of 7.2 percent on standard downs, (first down, second-and-7 or fewer, third-and-4 or fewer, fourth-and-4 or fewer) ranking 108th in the nation.

One possible interpretation of these stats is that the coaching staff, knowing the line could not protect on standard downs, chose to run the ball to avoid drive-killing mistakes like sacks or interceptions. This explains the conservative play-calling seen much of last season. The running game became more predictable once opposing defenses knew the Cats could not pass protect consistently.

But what explains the overall 3.4 rushing yards per carry average despite having breakout then-freshman Justin Jackson average 4.8 yards per carry at a high volume? College football counts quarterback sacks against rushing stats, which is why the team yards per carry was so low.

It’s clear run blocking was not the biggest issue in 2014, and with a stable of capable running backs the Cats should be fine in that area. One space for incremental improvement is short-yardage run situations, where the team had a 65.5 percent power-success rate — percentage of runs on third or fourth down, two yards or less to go, that achieved a first down or touchdown — and ranked 81st in the nation.

The big step forward will have to come in pass protection. In addition, quicker separation from receivers will take pressure off the quarterback and offensive line and give the Cats more effective quick-strike offense. The return of senior receiver Christian Jones should help that.

Brandon Vitable represents the biggest offensive line loss. The 6-foot-3-inch, 300-pound center, now with the Indianapolis Colts, was the anchor of the Cats zone blocking scheme. He will likely be replaced by sophomore Brad North, another athletic zone-blocker. Listed at 6-feet-2-inches, 280-pounds, he ranked as the No. 9 center in his recruiting class according to Rivals.com.

Senior Geoff Mogus will likely transition to left tackle, which he played during spring ball, while junior Eric Olson is penciled in as the starter at right tackle. This leaves junior Adam DePietro at left guard and senior Matt Frazier at right guard. With Frazier nursing an injury earlier this year, 6-foot-8-inch senior Shane Mertz started at right guard in spring and impressed, but it is unclear who will win a starting job.

The Cats return three starters to the line from 2014 in Olson, Mogus and Frazier, which bodes well in terms of chemistry. But this group struggled in 2014 as a unit so it’s tough to say whether they can make it work in 2015.

In addition, it’s still too early to tell how good young guys like redshirt freshmen tackles Tommy Doles and Blake Hance are. But with the starting lineup in flux, both will have the opportunity to show coaching staff what they can do.

Overall, there are question marks all over the offensive line. How will NU replace Vitable, especially in the run game? What will the Cats’ pass protection look like in 2015, particularly with Mogus’ shift to left tackle?

The answers to these questions will decide the 2015 season.