2015 Football Preview: Special teams have much room to improve 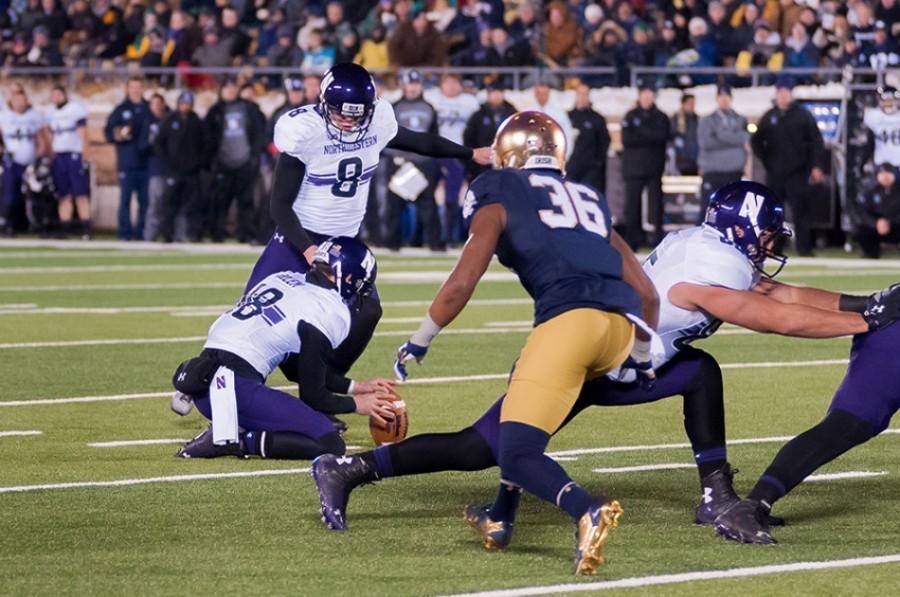 Special teams was not a point of strength for Northwestern in 2014.

Aside from junior kicker Jack Mitchell’s heroics in an upset win over Notre Dame, the Wildcats’ kicking, coverage and return units were often a detriment to the team’s success.

NU ranked 108th nationally out of 128 teams in average kickoff distance, 118th in average punt distance and 79th in average kickoff return distance. An inability to squeeze extra yards out of special teams hampered the Cats in the field position battle all season long, and subsequently the team started drives an average of 3.7 yards farther from the end zone than its opponents, according to Football Outsiders.

The first step to improvement for NU is anointing a new punter. Chris Gradone, now graduated, performed competently early on last season but didn’t have a big enough leg to bail the Cats’ offense out of its numerous short drives.

Likely replacing him is Hunter Niswander. The sophomore was in the mix for place kicking duties last August before injuring his ankle but also has ability as a punter and should be an upgrade over Gradone. If Niswander struggles — coach Pat Fitzgerald has kept his punters on a short leash in the past — junior Matt Micucci will likely be the next man up.

NU might also experiment with a new kickoff specialist. Mitchell’s job as the place kicker should be safe, but the two-sport athlete isn’t known for his big leg and rarely attempted field goals from longer than 40 yards last season.

Freshman Mason Weissenhofer is probably better suited for the kickoff job. Kickers don’t experience the same pre-recruitment scrutiny as other positions, so not much is known about Weissenhofer, but he was recruited to NU solely for his leg and tweeted a video of himself nailing a 65-yard field goal earlier this summer.

On the receiving end of special teams, the Cats need to find a reliable punt returner who actually has the trust of the coaching staff. NU returned just nine punts in 2014, while its opponents returned three times as many.

Frustratingly, the carousel of players back deep to handle punts too often settled for a fair catch or, worse, simply let the ball bounce away and eat into the Cats’ field position. Senior receiver Miles Shuler returned a team-high three punts last year and should have a handle on the job entering training camp. Assuming he can stay healthy, his consistent presence should serve as an upgrade.

A clean bill of health will also benefit presumptive kickoff returner Solomon Vault. The sophomore running back told The Daily in April that a muscle injury slowed him down for most of last season, and he still stood out by averaging a team-best 26.2 yards per return and taking one in for a score.

The only other facet of NU’s special teams considered to be a plus last season was blocked kicks, where the Cats were tied for first place in country with six. The kick coverage units probably won’t be as lucky in 2015, but all four players who recorded a block in 2014 are returning for NU. That includes senior cornerback Nick VanHoose, who racked up three.

And if all else fails, the Cats can at least lean on the stability of junior long snapper Chris Fitzpatrick. He was rated as the third-best long snapper in his recruiting class, and that’s all there is to say about Fitzpatrick. For a long snapper, that’s probably a good thing.