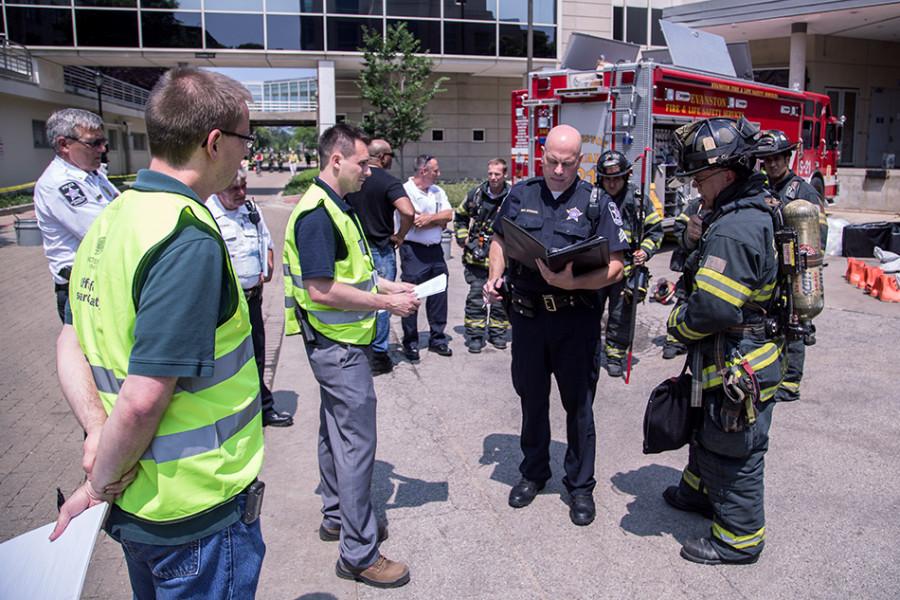 The Evanston Fire Department and other emergency teams respond to a drill at the Technological Institute on Tuesday. This is the first time Northwestern has held training with collaboration from multiple response teams.

“We want to make sure Northwestern and Evanston are able to communicate together and work together as a team, and make sure (our response) meets the expectations for us and for the students and the citizens of this city,” Hohl said.

On each day of the training, the response teams got a notification that there was an emergency at the Technological Institute regarding hazardous materials and responded to the incident as though it were an actual emergency. The Community Emergency Response Team, a volunteer program to train community members, acted as role players and witnesses in the drill.

For each of the three days, there were three different scenarios that the Evanston Fire Department responded to related to general science, chemistry and engineering material sciences, said Michael Blayney, the executive director for research safety at NU.

“We are a major research institution,” he said. “We do some really extraordinary science. In doing that, science requires hazardous materials. We want to minimize the potential for emergencies, and if those emergencies do occur we want to be able to respond to them immediately.”

Before coming to Northwestern, Blayney worked at Dartmouth College, where they ran many similar drills and training exercises. He said he hopes to run similar exercises in the future to simulate other emergencies that may occur on campus.

“It’s a lot of work but it’s certainly worth it and it’s something that we’ll certainly do every year going forward,” he said.

UP Emergency Services Cmdr. Shaun Johnson said the drills went as planned due to the thorough preparation and good communication leading up to the drills.

“This is a great opportunity for University Police and the fire department and hazardous materials organizations to work together alongside with research safety to test and exercise procedures to be better prepared for real world incidents that may occur,” he said.

After the training, the teams will go over what they learned and determine if there is a need for classroom instruction or purchasing new equipment. They will also determine whether or not they need to develop new protocol activity for similar situations, Blayney said.