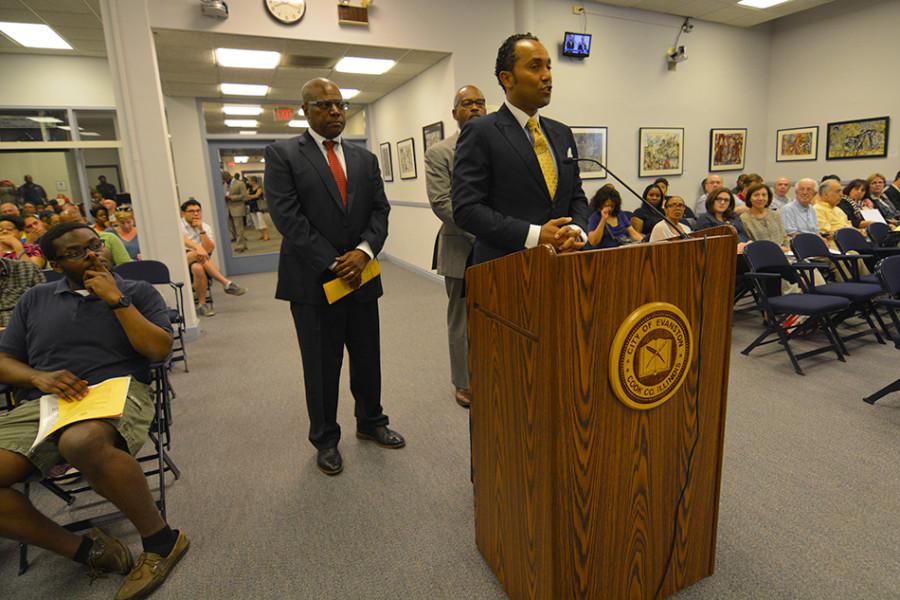 Representatives backing one of the three proposed locations for Evanston's performing arts center speak Monday night before City Council. Three Evanston residents from a committee tasked with analyzing the feasibility of a downtown theater later presented their plans before aldermen.

Aldermen instructed the city manager to move forward with a preliminary plan to create a three-stage performing arts center after hearing a presentation on the proposal at their Monday meeting.

A committee of 12 residents and two city staff members spent six months analyzing possible locations and logistics for a theater in the city at the request of Mayor Elizabeth Tisdahl. The representatives suggested a $37 million project including a long-term partnership with an established performing arts organization that would contribute 27 percent of the expense, while the city would swallow 20 percent. Forty percent of the funds would be raised through private contributions and foundation investment, and the remaining 13 percent would come from bank loans.

“What we’d like you to do tonight is, first of all, to endorse and support the idea of creating a performing arts center with the city as an integral partner,” said Judy Kemp, an Evanston resident and former chair of the Evanston Community Foundation, in her presentation to the council.

Aldermen unanimously approved progressing the project, tasking the city manager with forming the next steps using the committee’s recommendations. However, Tisdahl expressed concern for the city’s $7.5 million share of the proposed project’s expense.

“It certainly is something that we’re all going to have to grapple with,” Tisdahl told The Daily. “We’ll get an idea from the fundraising whether the community really is supportive of the arts center or not.”

The theater group chosen to partner with the city — an organization that would be expected to participate in the fundraising effort — would permanently occupy the largest auditorium, seating 350 people. Another performing group could claim the 200-seat theater, while the smallest theater fitting 100 would be available for temporary occupants.

Jim Corirossi, an Evanston resident who presented at the meeting, said despite the separate stages, the building would be streamlined to function under one not-for-profit organization. The organization would earn income from revenues such as tickets, concessions and rental fees, he said. The theater’s central lobby would also be available to rent for private events to garner additional revenue.

The task force narrowed potential locations for the theater to three options, including a city-owned parking lot next to the Evanston Public Library, a Chase Bank drive-thru combined with an adjacent vacant lot as well as the southeast corner of Clark Street and Benson Avenue proposed in part by Evanston’s Second Baptist Church, located nearby.

The representatives asked that a separate board be established to select a final site and timeline for the project, as well as plan for community support and engagement from Evanston businesses.

Kemp said the theater would stimulate Evanston’s business district with added patronage of surrounding restaurants and shops while also serving as an important cultural addition to the community.

“It was the vision of this task force to see a vibrant performing space,” Kemp said. “This will be a place where patrons throughout the region can gather time and again to be entertained and inspired.”