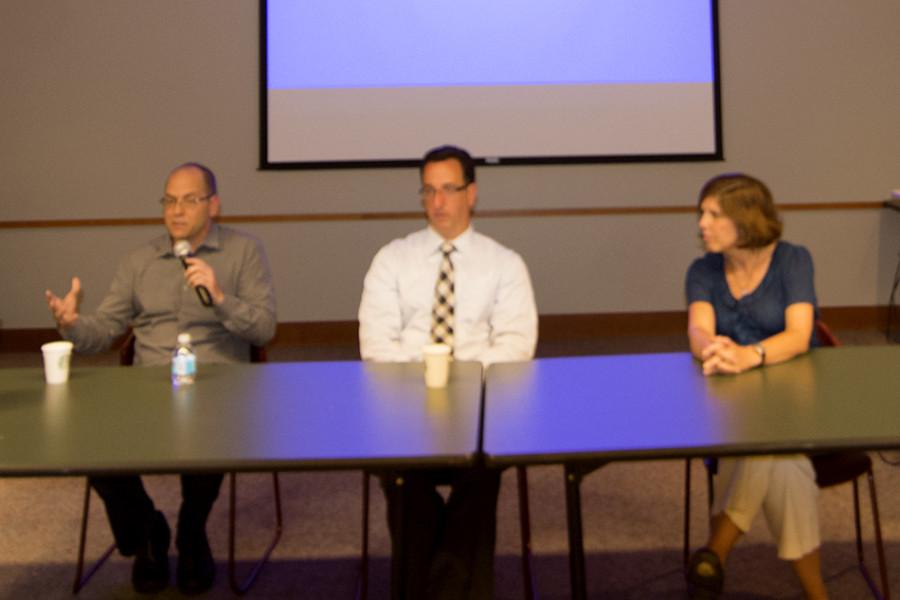 Evanston filmmaker Michael Frolichstein presented his documentary Wednesday night about Celiac disease, an autoimmune disorder that leads to damage in the small intestine upon the ingestion of gluten, and spoke about his experience with the illness.

About 80 people attended the Evanston Public Library event that included a screening of Frolichstein’s film, The Celiac Project, and a discussion panel led by Frolichstein, dietitian Carrie Ek and pediatric gastroenterologist Vincent Biank.

Frolichstein said he was diagnosed with Celiac disease at age 40 after many years of difficulty.

“There were some times when I felt better, like things would subside,” Frolichstein said. “When I got to be about 30, my health was on a downward spiral.”

Frolichstein said all it took for him to begin his recovery was a visit to a doctor for a blood test for Celiac disease.

“I could’ve avoided years and years … of feeling sick, not knowing what was going on and thinking that it was mental, by getting this blood test,” he said. “Right away, I felt the need as a filmmaker to do something to help raise awareness about Celiac disease.”

Frolichstein found interviewees in local areas and on the East Coast, as well as some via social media, he said. As he worked on making the documentary, Frolichstein spoke to other people diagnosed with Celiac disease and top experts on the autoimmune disorder, he said.

Ellen Frolichstein, Michael Frolichstein’s wife and a co-producer of the documentary, said her family was fortunate the International Celiac Disease Symposium was hosted by the University of Chicago in 2013, giving them an opportunity to speak with experts.

“We went and interviewed a lot of doctors from around the country and different parts of the world, and that really helped us,” she said. “That was a pivotal part of how we were able to put a personal story with all of the experts so that it could be informative and yet tell a story.”

Ellen Frolichstein said EPL seemed like a natural fit for the screening of the documentary, because her husband grew up in Evanston. The documentary took about five years to make and was partially funded by a Kickstarter campaign that has raised more than $35,000.

Lesley Williams, the head of adult services at EPL, said she thought screening the film was a great idea because documentaries are one of the important things public libraries can offer their patrons.

“Frequently, people don’t get opportunities to see documentaries, at least not to see them on a big screen or to see them with an audience,” Williams said. “Documentaries are often a way to really engage the public with an issue of community concern.”

Evanston resident Maggie Wade said she came to the event because she was recently diagnosed with Celiac disease.

“I was diagnosed with Celiac in April, and I heard about Mike’s project through mutual friends,” Wade said. “I really didn’t know anything about Celiac when I was first diagnosed … I was really happy to hear that there is a community of people that have Celiac.”

“I was anemic, I lost weight … so we decided to give me an endoscopy, and it said … you’re a classic Celiac,” Jackson said. “I feel like overall, I’ve learned how to live with it.”

Jackson said eating at restaurants is a big challenge because she can never be certain there is no cross contamination in the food she orders. Jackson learned a few new things about the disease from the documentary, she added.

“I didn’t know about it being hereditary, or that my kids and my grandkids should get tested,” Jackson said. “But the beautiful thing about being a Celiac is that you don’t have to take medicine to get healed — you just have to change your diet.”

Michael Frolichstein said he hopes this documentary encourages conversations about the illness.

“I hope that we raise a ton of awareness about Celiac disease,” Frolichstein said. “We are supposed to be the most advanced country and the number is anywhere from 83 to 85 percent undiagnosed or misdiagnosed, and I really want to help … knock that number so that so many people who are suffering will be diagnosed.”