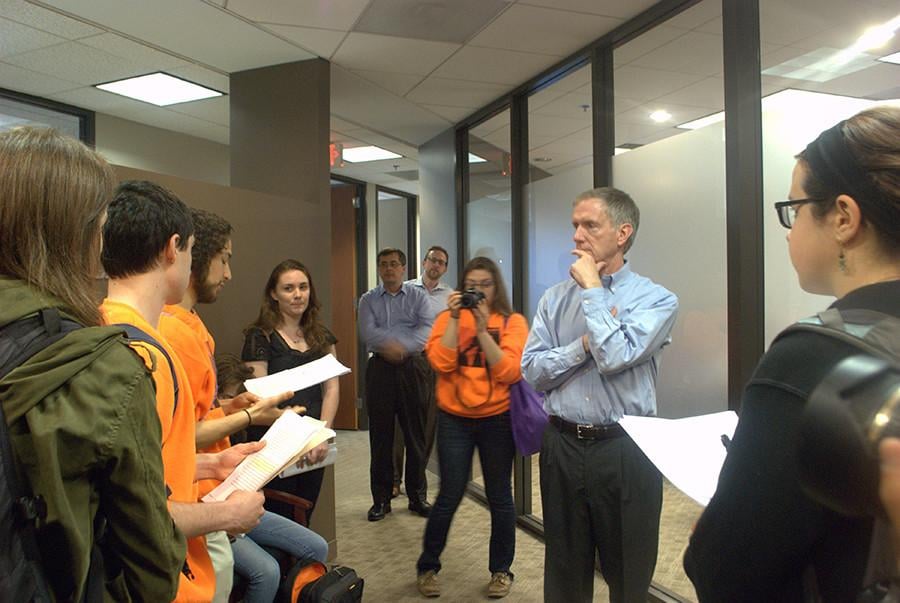 Members of Fossil Free NU read from a prepared statement on Wednesday in front of Will McLean (right), Northwestern's chief investment officer. The group handed hundreds of letters to McLean showing student support for coal divestment.

Fossil Free NU delivered hundreds of letters in support of coal divestment to Northwestern’s chief investment officer Wednesday morning, ahead of the group’s meeting with the Board of Trustees on June 15.

The group, formerly known as Divest NU, along with several faculty members and student groups such as Associated Student Government, Real Food at NU and Students for Ecological and Environmental Development handed the student-written letters written to Will McLean, NU’s chief investment officer. The letters referenced the referendum that passed in April where 74 percent of students voted in favor of divesting from coal companies.

McCormick sophomore Natalie Ward, communications coordinator for Fossil Free NU, said communicating with the Board of Trustees is a critical step in ensuring NU delivers on its sustainability promises.

“Northwestern says we should be leaders of sustainability, and right now we are not,” Ward said. “Delivering these letters is a powerful physical statement of support for the movement.”

A few other students from Fossil Free NU alternated reading from a prepared written statement that implored the Board of Trustees to consider NU’s potential role as a leader in the coal divestment movement. The statement said the University should be cognizant of the “deadly consequences of inaction” in not divesting from coal companies.

Zane Waxman, a SESP junior who is involved in the IIRON Student Network, a student activism group that trains people to be community organizers, said striving to ameliorate the consequences of fossil fuels was what pushed IIRON to join with the coal divestment movement.

Weinberg senior Colleen Fitzgerrell, from Real Food at NU, a group that focuses on shifting food practices to be more humane, said the student groups share the same goals and collaborated to strengthen their influence.

“Northwestern is a major university in the Midwest, a region that is definitely very dependent on coal,” Fitzgerrell said. “It could use its prestige and power to make a powerful statement in changing its support for exploitative practices.”