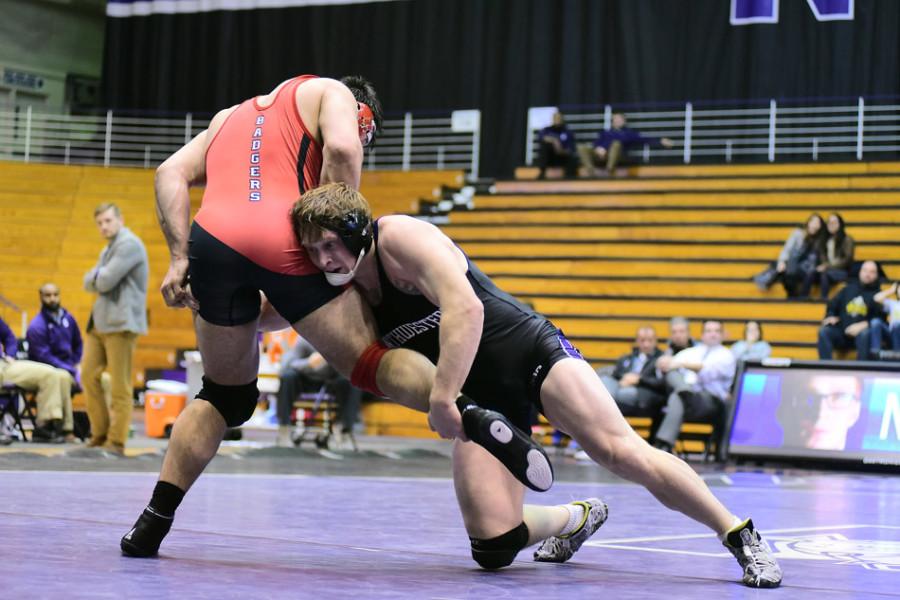 Heavyweight Mike McMullan battles an opponent on the mat. The senior attended boarding school from age 13 on, but still shares a close relationship with his brother Tom McMullan despite not being able to see him much.

Those are the words that describe Mike McMullan’s accomplishments in just his undergraduate years alone.

The former NU wrestler now embarks on a new set of endeavors, enrolling in the University of Pennsylvania’s graduate program starting this fall. McMullan will be after a degree in criminology and hopes to someday work for the FBI.

It’s an enviable list of achievements and goals for someone in his early 20s, but it’s McMullan’s older brother Tom McMullan who he sees in an exalted light.

Tom McMullan is held in similar high regard by his twin brother, Joe McMullan.

“For Tom to beat the odds and be so loving and caring daily, it says a lot about him and his integrity,” he said.

Tom McMullan, 25, is the oldest of eight children in the McMullan clan, and likes to take part in everyday activities like bowling and roller skating and trips to amusement parks. He can solve difficult math equations in a snap and name all of the state capitals and presidents in order. He’s constantly described as outgoing and a person who listens to and feels for others.

In these ways the one of the two eldest McMullans leads a fully functional life. But he also wasn’t expected to live past his first birthday.

Tom McMullan has cerebral palsy, a neurological disorder that leads to loss or impairment of motor function and affects body movement, muscle control, muscle coordination, muscle tone, reflex, posture and balance. CP can also cause a number of other physical or cognitive issues. Some with the disorder may drool, be unable to eat or drink, have a mental disability, be visually or hearing impaired or experience epilepsy, behavioral or communication issues.

Tom McMullan has some of these impairments. The 25-year-old is mentally disabled, needs to be fed through a surgically-inserted tube in his stomach, experiences behavioral outbursts, has slight visual impairments and sometimes drools. He exhibits trouble speaking, although his twin describes him as very communicative.

As for physical issues, Tom McMullan can walk and has competed over the years in Special Olympics — earning several medals in golf, bowling and track and field. But he does have scoliosis, shakes at times and wobbles and falls a lot. He is diagnosed with respiratory failure, which forces him to sit down and rest after a short time walking. All of the extra work this respiratory condition entails has saddled him with an enlarged heart.

“Since the early years of my life, I’ve put in perspective that as a twin, having CP and all of these assorted issues could’ve happened to either of us and it’s unfortunate that it happened to a loving guy like Tom,” Joe McMullan said. “But you learn to accept it and use it as motivation and it humbles you when you think about it every day.”

Acceptance is easier when Joe McMullan, Mike McMullan and other family members think about a simple fact: Tom McMullan could have been gone a long time ago.

The struggle to live goes back to the 25-year-old’s first seconds on Earth. Born to John and Suzanne McMullan on January 24, 1990, Tom McMullan appeared he would be a healthy boy throughout the pregnancy process, but immediately after he got into the outside world, the troubles commenced.

“I could tell from the tone in the doctor’s voice and in his eyes that something was wrong,” Suzanne McMullan said. “They rushed the baby out. It was surreal, it was like a movie but we were actually living it.”

He was whisked away so fast after birth that his mother did not know the problem. Her son was not breathing.

The doctors soon told her that her son was being transferred to a different hospital for special attention and to run some tests, but otherwise she was kept in the dark on the true issues for two days until she was discharged and could visit him.

It was there she learned he had cerebral palsy. The doctor treating him told her he would only live one year.

“She said to me, ‘Do you want to let him go or us to keep treating him? He’s never going to be normal,'” Suzanne McMullan said. “And I just went, ‘How can I make this decision to end someone’s life? I’m a mere mortal. I don’t know what kind of deficits he’ll have, but I don’t have the right to decide that.’”

Tom McMullan was kept in the hospital for three months, and when it was clear he still couldn’t fully breathe on his own and had other serious delays, he was then transferred to a rehabilitation hospital for a year.

He would be brought home after that, but hospital staff still said he would live to just three years old. It was clear throughout his early years that there were no resources to aid his parents.

“There were none, you had to navigate on your own,” his mother said. “I used every ounce of free time I had to search for parent support groups and to evaluate different school districts.”

In the end, though, it would all work out. The Voorhees Pediatric Facility in New Jersey opened up at just the right time to service children with medical and behavioral disabilities like Tom McMullan, and he thrived there from ages 5 to 15. He moved on to Melmark in Pennsylvania, a group home where he has remained to this day.

Tom McMullan has lived away from home since enrolling at Voorhees. Mike McMullan admits that at 5 years old visiting his eldest brother, he was uneasy about the condition of the school’s residents.

“I was uncomfortable the first couple of times we went to visit just because of the other people who had issues that I had never seen before,” he said. “So it was kind of adjusting to that and realizing it was okay. It took me a few times.”

Joe McMullan agreed that after that, Mike McMullan quickly caught on and always made sure to keep their brother included rather than excluded.

Mike McMullan went to boarding school from age 13 on, and with Tom McMullan away from home, they mainly only saw each other on the holidays.

But it didn’t stop the future Wildcats wrestler from forming a close bond, or intervening when somebody used words demeaning those with mental disabilities.

“At first, I would get really mad and a couple times I would lash out and yell at them and tell them it’s insensitive,” he said.

He recalled an incident after 2005 film “The Ringer” was released, which features a character who pretends to have mental disabilities.

“People were like, ‘Mike, why don’t you go see this movie?’” he said. “And it was very frustrating to me that my friends could be insensitive like that, but it’s not their fault because they weren’t around the culture.”

McMullan said he’s calmed down on that point and believes children nowadays would be more understanding. But, he added, he still judges people pretty hard when he hears them use derogatory words.

It was also simple to come to his brother’s defense because of his personality.

“People just gravitated toward him, he stole the show,” McMullan said.

Joe McMullan said his twin is “like the mayor” every place he goes.

“He knows everyone on a first-name basis and he knows their business because he’s loving and caring,” he said. “There’s a lot of people in this world with no disabilities and they have a difficult time having Tom’s great outlook on life.”

Middle school was also the first time Mike McMullan volunteered in a Special Olympics event, and he continued his involvement with a few Special Olympics Chicago events during his time at NU.

He then joined the organization and soon learned about Special Olympics’ Polar Plunge fundraiser.

He took part this year, raising his goal of $500 and jumping into the cold water in March. He said his family was very supportive throughout the process and that they said they all want to participate next year.

Tom McMullan is thriving 24 years past his original prognosis, but no individual with a disability comes without complications.

McMullan’s physical issues prevent him from completing any task on his own, and he requires a nurse to be with him all times at Melmark. Similarly, his behavioral problems necessitate a behavioral analyst to always be present.

Mike McMullan said when his brother doesn’t take his medication, his behavior can be high strung — or worse.

“He’s jumped out of a second-story window several times, he’ll go out into traffic, he’ll open the door of a moving car,” Suzanne McMullan said. “He has no concept of safety.”

And Tom McMullan, while generally happy in his decade at Melmark, has run away from the facility at times trying to make his way to California.

Although scary, this behavior does have its amusing side.

“Tom left his room at night and went into this really nice neighborhood next door and knocked on someone’s door and said, ‘Can you take me to California?'” Mike McMullan said. “And they’re like, ‘What the hell’s going on?’”

Other issues persist, like the family having to decline certain social functions for Tom McMullan’s sake, as well as dealing with neighbors that don’t talk to the family because of his outbursts.

But his siblings have always stood by him. It’s been an effort led by his parents and Joe McMullan, who harnesses a special connection with him as a twin.

Mike and Joe McMullan said their brother’s high character has never changed and that he has found a good spot at Melmark. He is cared for at every waking moment on the college-like campus and is given academic stimulus five days a week.

But sometimes the aid he receives in non-academic hours can be hit or miss. Mike McMullan said he gets irritated that certain people in the medical industry neglect those with disabilities. He said a specific instance just weeks ago comes to mind.

“Recently Tom was in the hospital because he had pneumonia and my brother and I went to visit him and there was a guy from Melmark there monitoring Tom while he was in bed,” Mike McMullan said. “We walk in and the guy’s on his phone, which is fine, but then we told him who we were and introduced ourselves and he just went back to his phone and the only thing he would say is, when Tom was rolling around, to keep still and keep your legs straight. He just kept saying that and he didn’t have any interest in getting to know us or more about Tom.”

Regardless, the family generally feels Tom McMullan is in the right place and hopes he continues to remain happy at Melmark.

In fact, he continues to reach higher, possibly taking on a job at Wal-Mart.

With his new schooling, Mike McMullan is planning to move back to Philadelphia with Joe McMullan and connect more often with Tom McMullan nearby.

The wrestling All-American at NU will forever be proud of and grateful for his eldest brother no matter what.

“For someone who wasn’t supposed to live past 2, he’s been doing well long past then,” he said. “He has a ‘conquering the world’ mentality, but I’m glad to see Tom keep doing what he’s doing. It’s been incredible.”