The Daily Northwestern • May 21, 2015 • https://dailynorthwestern.com/2015/05/21/sports/womens-golf-northwestern-striving-new-heights-ncaa-championships/ 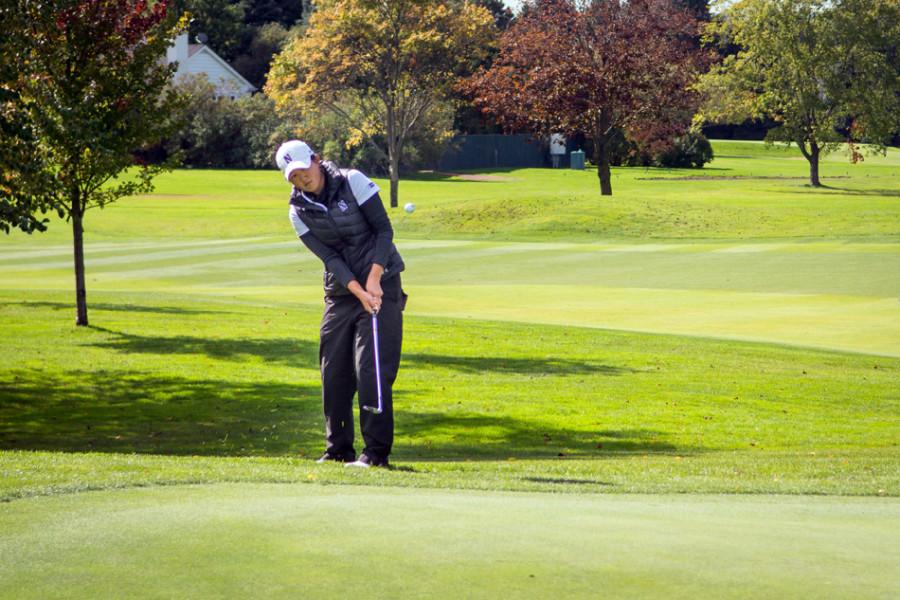 Kaitlin Park chips onto the green. While the junior finished fourth at a U.S. Women’s Open Sectional Qualifier, she did not make NU’s NCAA Championships roster.

The Wildcats have craved recognition as a consistent top-10 program, and it appears now the team is getting what it wants.

No. 14 Northwestern enters the NCAA Championships on Friday at the Concession Golf Course in Bradenton, Florida, in a 24-team field that, for the first time, won’t be competing in stroke-play-only format.

The tournament will start off in that design with four days and 72 holes of stroke play. After 54 holes, the field will be cut to the top 15 and ties, and at the conclusion of stroke play, eight teams will advance to the match play to decide the national champion.

This is the Cats’ third consecutive trip to NCAA Championships, and after two years of garnering little attention at the event, the Cats are getting hype as a potential sleeper pick for the national title.

There have been raves about the intense and competitive culture the team has developed, and the idea of NU as an elite program is fomenting strongly ahead of this event.

Add in a format that may favor depth-based squads such as the Cats, and the result is soaring internal confidence.

“A year and nine months ago, I said that we wanted to compete for a national championship and I think this format may allow us to do so the quickest,” coach Emily Fletcher said. “That’s because of our depth No. 1 through 5, I’ll match us up there with anyone in the country.”

Don’t mistake that proclamation with outsized egos, though. NU doesn’t feel entitled to a spot among the top eight, with senior Hana Lee noting the team is still a clear underdog in an event with the sport’s cream of the crop.

And the Cats know the course they must tame is no simple puzzle either. However, the Concession Golf Club has been a familiar layout for the men’s team in past years as the host club for the Big Ten Match Play Championship, and NU is traveling with former men’s head coach and current NU director of golf Pat Goss who can impart wisdom on how to play the layout.

Fletcher wasn’t quite sure whether the scores will be high or low at nationals, but said the putting surfaces were of the “demanding modern type” with three or four quadrants that require attention so players find the right tier. The Cats only had one practice round on the course this week, an extra incentive to bring along an expert eye in Goss.

Whatever the challenges though, the self-belief is there, and it always comes back to that depth.

The Cats shuffled the roster throughout the spring because they have too many good players — anyone could have a big performance.

In fact, NU will be going to NCAA Championships without Kaitlin Park, despite the junior finishing fourth in a U.S. Women’s Open qualifier on Monday and earning an alternate spot for possibly the most prestigious professional tournament in women’s golf.

Lee, sophomore Kacie Komoto and junior Suchaya Tangkamolprasert also competed in the qualifier, and Fletcher previously said if any player appeared to be slipping there or in practice, Park would get that fifth spot.

Apparently nobody moved back an inch.

The qualifier was actually the reason the Cats arrived late and only completed one practice round, but the players felt that competition would be beneficial for NCAA Championships.

“To have that kind of pressure knowing it’s a huge tournament, being comfortable with it, it was a great practice for us,” Lee said. “And I think getting in more competitive rounds will help us become more comfortable out there.”

Aside from that, NU’s preparation for NCAA Championships hasn’t changed from recent years, as the team has kept the same workouts along with extended rest after a busy stretch.

Players have been left on their own to practice and continue to build their inner fire.

“Our coaches have let us work on whatever we needed to individually,” Komoto said. “We all want to win. We’re all hungry and ready. We’re all really competitive, and that keeps us on our toes.”

In order to cruise through the stroke play, the Cats will have to avoid the slow starts they’ve succumbed to as of late. But a greater urgency and fight against trouble has been apparent since Big Ten Championships.

And that may be the key factor for NU, especially if they make it to match play.

“Part of the resiliency and energy that these girls have shown has to do with the fact that they have been pushed physically by the strength and conditioning folks,” Fletcher said. “It’s hard to create that pressure situation in golf … These tough workouts are something you can draw on in competition and may give us something extra for this week.”