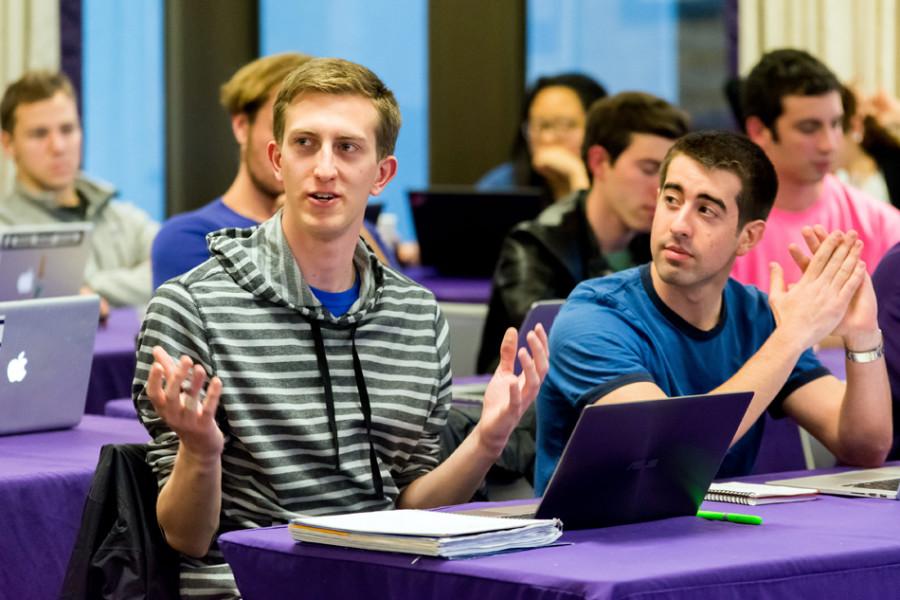 Weinberg sophomore Alec Blumenthal speaks in favor of a resolution that asked the University to ban tobacco on campus. The resolution failed with 16 votes for, 26 votes against and two abstentions.

Associated Student Government Senate rejected a resolution asking Northwestern to institute a tobacco ban by Fall Quarter 2016 at its meeting Wednesday, though ASG President Noah Star said administrators may impose a ban regardless.

The resolution failed with 16 votes for, 26 votes against and two abstentions.

McCormick sophomore Nick McCombe, an Interfraternity Council senator, spoke against the resolution. He said ASG should strive to “embrace the full spectrum of personalities we see on this campus.”

“This resolution quite literally pushes members of our community, who happen to be smokers, away from campus,” he said. “The reason we have this body is to include students, not to push them away.”

The resolution would not have made campus tobacco-free, but would have represented the student body’s support for such a measure. It would have also created a task force to coordinate such a policy. ASG rejected a proposal for a campus-wide ban in October 2013.

“You’re still allowed to smoke,” Krasner said. “We just ask that you step off campus, because we want to create the safest possible environment for Northwestern.”

Star said a tobacco ban will “probably happen at the University level in the next one or two years” regardless of ASG’s actions.

“It seems as if something is going to happen no matter what,” he said. “Feinberg (School of Medicine) really seems to be pushing that Northwestern needs to be tobacco-free.”

With that in mind, Krasner framed the resolution as a way for Senate to have input in what the future policy could be.

“Tobacco-free campus is happening,” he said. “We just want student voice in that process.”

Before the resolution was discussed, Weinberg junior Mackenzie Schneider, vice president for A-status finances, introduced the committee’s funding recommendations for next school year.

Senate allocates more than $1 million per year to A-status groups, organizations such as A&O Productions and Mayfest that put on larger, more expensive events.

“The board spends about 100 hours going group by group,” she said.

ASG’s funding comes from a fee students pay every quarter. Next year, the fee will be $58 per student per quarter.

The committee leaves $58,925 in an “amendment pool” for Senate to allocate as much as it wants. Senators will divide up the pool and approve a final funding plan next week.

At the end of the meeting, Star reminded Senators of his “themed” session and said next week’s theme is “nature.”

Correction: A previous version of this story misstated that the purpose of a commission to which Senate confirmed three members. The commission will oversee elections for on-campus senators. The Daily regrets the error.