The Daily Northwestern • May 20, 2015 • https://dailynorthwestern.com/2015/05/20/campus/eva-moskowitz-discusses-new-york-city-public-school-system/ 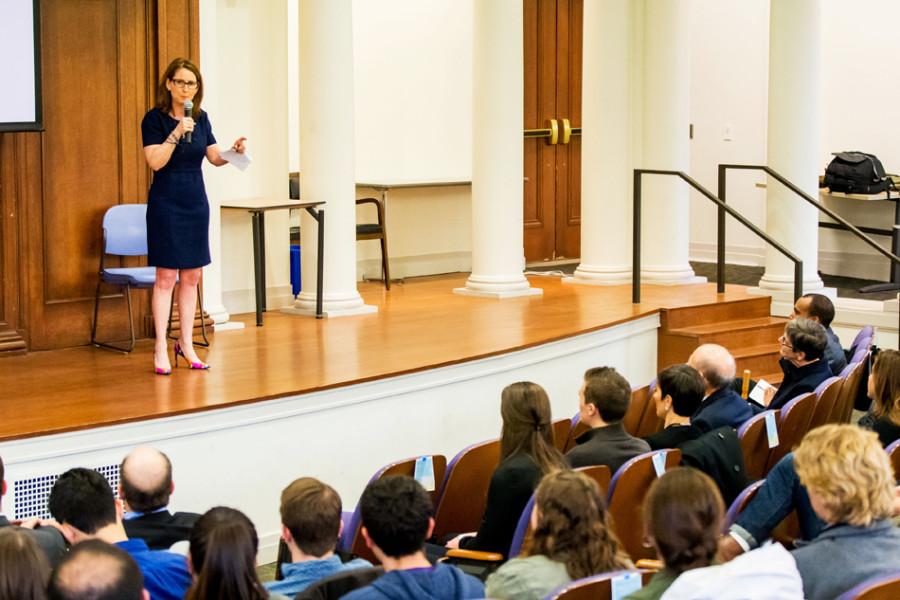 “In the high school that I went to the bathroom doors had been removed and not replaced,” she said. “We actually were expected to use the bathroom in the hospital across the street. The kind of dysfunctionality in the New York school system was very much on my mind.”

Moskowitz was this year’s speaker for the School of Education and Social Policy’s Ray and Nancy Loeschner Lecture. The event, co-sponsored with the Contemporary Thought Speaker Series, was held in Harris Hall on Wednesday evening and attracted about 40 students and community members.

Moskowitz said during her high school years she felt like her teachers weren’t knowledgeable about their subjects. She said this surprised her, especially because she considered herself one of the lucky ones for not being at a school that had “metal detectors where absolutely no learning was going on.”

“I became really passionate about this thing called public education,” she said. “I always had this sense that K-12 was being left behind and to me this was a very foundational opportunity.”

She said if a child doesn’t receive a good K-12 education, their future opportunities will be severely limited.

Because of this, she left her teaching position at Vanderbilt University and ran for city council in New York and in 1999 became chair of the council’s education committee. There, she held 125 hearings about the status of city schools.

“While I did those hearings as fast and furiously as one could possibly imagine, I began to lose faith that this was the answer,” she said. “Because there were so many structural impediments to (creating change).”

Many of her attempts at change stirred trouble with teacher unions, but it was after her time in office ended that she realized she could create change in a bigger way by starting charter schools that became Success Academies.

She said the first school opened in Harlem in 2006 with 165 kindergarteners and first graders. This August, she said, there will be 35 schools educating 11,000 children.

In 2014, New York City Mayor Bill de Blasio tried to evict charter schools from public school buildings. Moskowitz said because of the new policy, they lost space for three of the Success Academy schools. With the help of New York State Gov. Andrew Cuomo, de Blasio lost and the city had to find space for the three schools.

The 32 schools, which she said work under a “very progressive model of education,” teach “discovery oriented” science and math skills to kids beginning in kindergarten. Moskowitz said playing with board games is emphasized, since they help develop children’s critical thinking skills, and said all students play chess.

According to a New York Times article, 29 percent of New York City public school students passed the state’s reading tests and 35 percent passed the math test. Between 64 and 94 percent of students at Success Academy schools passed the same tests.

SESP sophomore Arielle Ticho said she hopes to one day become an elementary school teacher. She said listening to Moskowitz helped her form her own thoughts about the school system.

“What inspired me the most was her talk about the teacher inspiring a love for poetry into her 5 year-olds,” she told The Daily. “And I think that that, instead of teaching the numerical skills or the exact topics … (is) what I see myself doing.”

Weinberg senior Joe Eichenbaum, chairman of the Contemporary Thought Speaker Series, said his group decided to invite Moskowitz because she did “an enormous thing” in education, “the most important field in the world.”

“I think that it makes a lot of people think more about teaching,” he told The Daily. “One thing that struck me is that … people who are interested in innovation and discovery could be persuaded to teach and teach well.”