The Daily Northwestern • May 19, 2015 • https://dailynorthwestern.com/2015/05/19/city/evanston-residents-city-officials-debate-five-proposals-for-harley-clarke-mansions-future/ 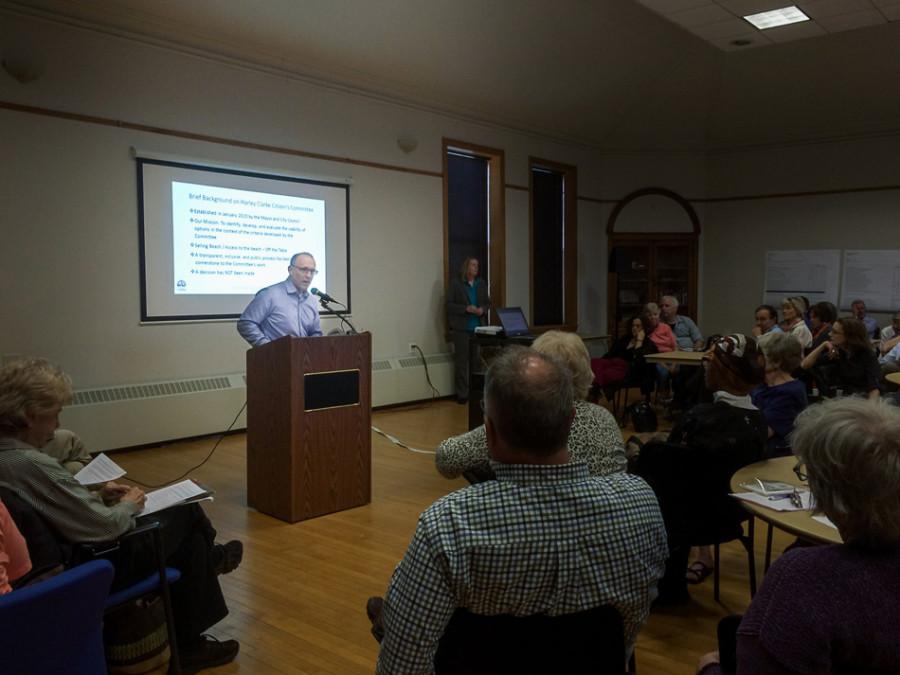 Steve Hagerty, chair of the Harley Clarke Citizens Committee, presents background on the Harley Clarke mansion to a packed room Monday night. The committee has gathered public opinion and research since January to help determine a future for the mansion, and will present its final recommendations to City Council next month.

More than 100 Evanston residents and city officials gathered Monday evening to discuss five proposals from the public for the future of the Harley Clarke mansion.

The proposals included the city renovating the mansion, demolishing the building and selling the property to a third-party owner who would repurpose the building and take care of all costs associated with it.

The Harley Clarke Citizens Committee, a group of five Evanston residents and two city officials, organized the workshop at the Civic Center to present the ideas. Mayor Elizabeth Tisdahl assembled the committee in January to address the mansion’s fate after the Evanston Art Center, which has occupied the space since the 1960s, announced it would vacate Harley Clarke by the end of May. The committee held seven meetings prior to Monday’s workshop to discuss options for Harley Clarke’s future, drawing upon public opinion and its own research of the property’s history.

Steve Hagerty, the committee’s chair, led the workshop, as people spoke and attendees split into breakout groups to discuss potential downsides to the proposals.

Five community members detailed their visions for the different propositions for the mansion, although no one stepped forward to support razing the building.

Sheila Sullivan, president of the Southeast Evanston Association, advocated that the city retain ownership of the property by using funds in Northwestern’s $5 million gift to the city to renovate the mansion.

“This will benefit the many, from all Evanston walks of life instead of just a few,” Sullivan said. “When you have a precious commodity like Harley Clarke that everyone in the city can use and enjoy, wouldn’t you absolutely want to make that happen?”

During the breakout sessions, many Evanston residents voiced concerns that the city would not be able to financially sustain the building in the long run.

Three of the presentations outlined a plan for the city to sell the property to a third-party company. Peter Greene, a longtime Evanston resident and vice president of CBRE Hotels, suggested converting Harley Clarke into a bed-and-breakfast or a larger boutique hotel would be the most economical approach.

Evanston resident Chris Oakley proposed redeveloping the mansion into an assisted living home — a more ideal use for the building than a hotel, he said.

Both Greene and Oakley said turning Harley Clarke into a commercial outlet would generate enough revenue to maintain the building’s upkeep, as well as create jobs.

“The hospitality industry is really an entry-level position for what a lot of people do when they get into this business,” Greene said during his presentation. “My first job was washing dishes.”

Some residents said they worried selling Harley Clarke to private developers would lead to further commercialization of Evanston’s lakefront.

City residents Patrick Donnelly and David Jennett vividly described Harley Clarke’s potential use as a public oasis privately owned by a nonprofit or other foundation, which would use the space for cultural and educational purposes.

“We’ve been using the term ‘cultural center,’ but ‘cultural center’ doesn’t quite fit,” Donnelly said. “To me, that sounds like a place maybe no one goes. … What we propose this place be is a place where all of the community can come together.”

Attendees criticized Donnelly and Jennett’s plan as idealistic. The two presenters outlined a fundraising goal of $3 million, a sum they said should be easy to raise. Despite their assurances, the audience remained unsure.

“A big comment on that one is how realistic is it that a community group can raise the kind of money that’s necessary to renovate this building,” Hagerty told the group based on feedback he received from the breakout sessions.

When no one stood up to speak on the fifth solution, Hagerty cut in to discuss the proposal to demolish the property and repurpose its land as publicly owned park space. He highlighted key arguments residents in favor of demolition had previously outlined to committee members. Hagerty said some said it would save the city from spending money to keep the mansion, while others said the mansion’s land would be better used for public events.

One of the Harley Clarke committee’s goals is to obtain public input. Previous meetings have included time for public comment, and the committee has an email address through which they’ve already received several suggestions and proposals, Hagerty said.

“We have worked hard to develop a transparent and an inclusive and public process,” Hagerty said. “That has been the cornerstone of what we’re doing. It’s really, really important that everyone have a say in this.”

The committee will collect remarks made at the meetings as well as those from email and an online survey. It will present its final recommendations based on feedback to City Council on June 8.