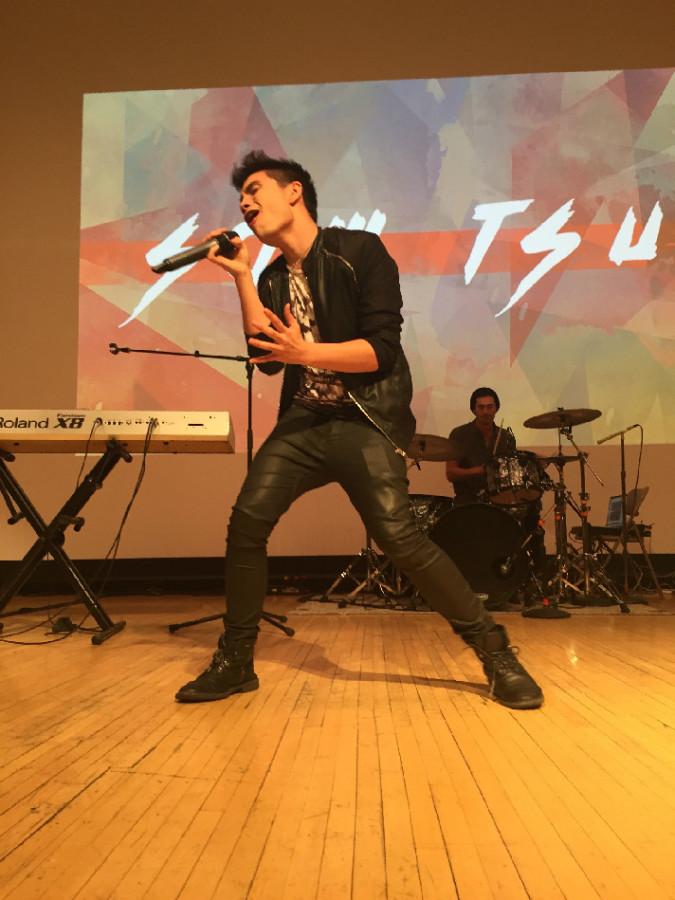 This year’s show, named KA-SAUNA, featured Tsui and a variety of student performers including dance group Team Enten and the NU Taekwondo Club.

KASA Presents, a dance team performing routines to K-Pop music, opened the second act of the show and built up energy in the auditorium before Tsui came on stage. The event’s emcees, Weinberg seniors Mike Choi and Kevin Minn and Weinberg junior Jane Yoon, kept the audience laughing between acts with skits and videos they prepared for the show.

Tsui, who began working on YouTube videos in 2008 and now has more than 1.9 million subscribers, is known for his covers of artists such as Taylor Swift, Sam Smith and Maroon 5. He also produces original songs, medleys and mashups.

Tsui and his ensemble encouraged the audience to sing along and have fun throughout the set. Several audience members left their seats and ran to sing and dance in front of the stage during Tsui’s opening song, “Wildfire.”

“YouTube is amazing, has changed the world for musicians and young people and artists and anyone who has something to say, and it’s awesome,” Tsui said. “I love that I get to share my music online with you guys, but getting to come in person and meet people and do shows, nothing beats that.”

His set included mashups of “Counting Stars” by OneRepublic and “Timber” by Pitbull featuring Kesha, as well as “Let It Go” by Idina Menzel and “Let Her Go” by Passenger.

Tsui also performed a new original song for the audience, titled “Clumsy,” which he said will appear on his coming album.

He added the Internet, specifically YouTube, has made it an exciting time for young people to express themselves creatively.

“It’s an especially amazing time for Asian Americans, because I think we have means of sharing what we think and create with the world, and I think the world wants to hear it,” he said.

Minn, one of the emcees, told The Daily he was excited to see Tsui perform at NU because he has been following him on YouTube for a long time.

”When I heard that Sam was coming, I was stunned,” Minn said. “I couldn’t believe we got such a big star.”

HyoJin Park, the outgoing president of KASA, told The Daily the process of planning KA-SAUNA was lengthy and demanding, but it was rewarding because the group is able to showcase Korean culture to a large audience.

“All this process begins in the fall, when we get our budget … and then, we plan out throughout the entire year,” Park said. “We were thinking and thinking and Sam Tsui had never been to Northwestern, so we decided since he was such a big figure in the YouTube music scene, we would bring him.”