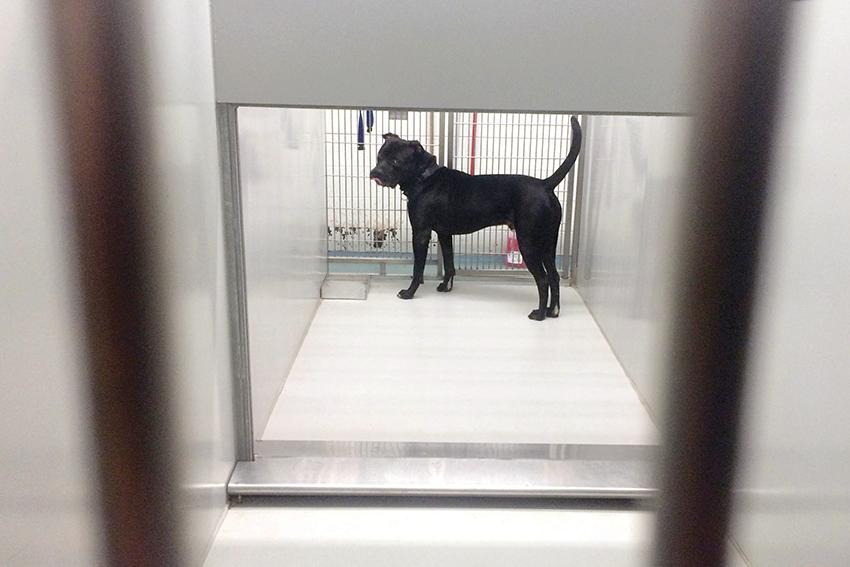 Alisa Kaplan and Vicky Pasenko like to say they’re the Swiss Army knives of Evanston Animal Shelter. During their approximate 25 hours a week at the shelter, they may be found in their office bent over paperwork and answering phones. But they might also be found in the trenches doing the grunt work of animal care: cleaning soiled cages, walking stir-crazy dogs and feeding fast-growing kittens. Without formal titles, the two volunteers have managed the shelter ever since Community Animal Rescue Effort departed a year ago.

On May 9 of last year CARE, the nonprofit that previously ran the shelter, left the building to the city — with its shelves and bank account empty. That weekend, there was an outpouring of support from the community, with Northwestern students planting flowers in the garden and holding a donation drive to replenish supplies, Pasenko said.

“We were doing a lot in that first month, but at the same time we were also able to put into practice the changes that we felt strongly need to be made here,” Kaplan said. “Being in a position to do that and watching it actually work was a very exciting time.”

Under the supervision of the Evanston Police Department, the shelter, 2310 Oakton St., has adopted out about 200 cats and 70 dogs, Kaplan said. But it’s the corps of volunteers who have kept the shelter thriving, Evanston police Cmdr. James Pickett said. The volunteers who remained after CARE left recruited and trained 100 more volunteers, additions the shelter needed to deal with its never-ending demand with animals being dropped off on the doorstep on a daily basis, Pasenko said.

After an interim of informal leadership, Kaplan and Pasenko are preparing to officially take over under their nonprofit organization called Saving Animals for Evanston. The Human Services Committee unanimously approved SAFE’s application two weeks ago, and with six out of nine City Council members on the committee, the aldermen will likely vote in SAFE on May 26.

The duo was also central to raising initial objections to CARE, the most contentious of which was a canine euthanasia rate of 45 to 50 percent — a statistic CARE continues to dispute. Kaplan and Pasenko — the two co-presidents — along with another volunteer initially created SAFE in 2013 to fund the livelihood of dogs CARE slated for euthanasia. Trying to avoid a feud between the new organization and CARE, which they were still involved in, the small-scale non-profit was primarily funded by friends and family of volunteers, Kaplan said.

CARE took with it an excess of one million dollars when the organization left the shelter, severing their contact with the city completely, city manager Wally Bobkiewicz told The Daily in April.

CARE volunteer Karey Uhler said that the organization was justified in keeping the money because it was their volunteers who raised it.

Although Kaplan said she’s wary of unearthing this buried conflict, one that held the city and the shelter in a web of politics for months starting in February 2014, one of the volunteers’ missions this past year has been to change the shelter’s approach to dogs with behavioral issues.

“We also just sort of start from the assumption that the dog is home-able, adoptable and work from there instead of the other way around,” Kaplan said. “We never said that we thought every dog was safe to rehome, but we do think that many more dogs are safe to rehome than CARE did.”

Back when CARE ran the shelter, three days after a dog arrived, volunteers would give the dog a behavioral assessment, determining its adoptability by observing responses to interactions with people and other animals, said Angela Love-Bradford, a CARE volunteer who has remained with the displaced organization. Only dogs that showed severe aggression toward people, extreme possession issues or required medical care outside the shelter’s capacity were euthanized — those that fell into a “gray area” were re-assessed a couple of weeks later, Love-Bradford said.

Although those behavioral issues are workable, few adopters have the skillset to deal with those kinds of animals, she said.

“(Euthanasia is) not a decision anyone wants to make, and it was a decision that we spent a lot of restless nights making when we had to do these evaluations,” Love-Bradford said. “It hurts. Every time you have to make that decision it tears a little piece of your heart out.”

After the city took over the shelter, the volunteers’ strategy for reducing canine euthanasia was getting the dogs out of the stressful environment and into either foster homes or off-site training centers, current shelter volunteer Shannon Daggett said. Although CARE tried to use the foster method as much as possible, there was a limited pool of people willing to open their homes to challenging dogs, Love-Bradford said. The new effort took an expansion of the shelter’s foster program, Daggett said.

The summer after CARE’s departure, a gray pit bull mix named Oscar arrived at the shelter emaciated and with a leg that had broken and reset on its own, Pasenko said. Oscar had a lot of strikes against him, Kaplan said. He didn’t relate well with dogs or people, and he fiercely guarded his food. To better serve Oscar’s needs, the volunteers sent him to an off-site training center in Ingleside, Illinois.

For 10 weeks Oscar lived at Big Ed’s Dog Training, a 4-acre ranch run by Ed Gramiak, who devotes himself to rehabilitating dogs with “heavy-duty” issues like fear-aggression or possessiveness. For two of those weeks, Gramiak went on long walks with Oscar to strengthen his injured leg, a vulnerability which he identified as the main source of Oscar’s problems. When Oscar ate, Gramiak would crouch on the ground “cheering him on” so the dog would understand there was nothing to fear.

Kaplan said Oscar’s transformation demonstrates the shelter’s renewed dedication to taking the best possible care of the animals they receive.

Oscar’s current owner Karin Prendergast, who adopted him in November, said she now feeds him out of the same bowl as her other dog without conflict.

“He’s a dog I’m very proud of just because he was so broken, he was so insecure, he was so scared and shy,” Gramiak said. “He’s thriving in his forever-home now and that’s a dog that a lot of people used to be afraid of.”

The start of a new era

Despite their newfound control over the fate of the animals in the past year, with the city’s oversight the volunteers have had much less power over shelter funds. Without the ability to fundraise on their own, every purchase the shelter makes has to go through the city, Kaplan said.

That system works well with large, consistent purchases such as food and kitty litter but makes small purchases a burden, resulting in volunteers often paying out of their own pockets, she said.

The city reimburses those last-minute necessities if the volunteers send receipts, Pickett said. But going through the bureaucratic rigamarole for a roll of paper towels or a bottle of bleach often isn’t worth it, Kaplan said.

“The goal is to gain some control over the money without falling into the CARE pitfalls,” she said. “CARE raised a lot of money and left with it and left us with nothing. That’s just not something we’re interested in repeating.”

The volunteers plan to begin fundraising efforts immediately when SAFE takes over the shelter on June 1, Daggett said.

The same day, the police department will hand over its supervising duties to the city manager’s office. The city is also replacing the position of Chief Animal Warden with an animal shelter coordinator, who will serve as a physical presence at the shelter and a link to the city’s nucleus, said community engagement specialist Charliese Agnew.

The main problem with the city outsourcing the shelter to CARE was a loss of connection to the shelter’s innerworkings, Kaplan said. Increased transparency and bolstered communication between the shelter and the city is exactly what Kaplan thinks SAFE needs to succeed in running the shelter.

“We’re very focused on this shelter, and we just want this shelter to be the best shelter it can be,” Kaplan said. “We want to work with the city to make that happen.”