The Daily Northwestern • May 15, 2015 • https://dailynorthwestern.com/2015/05/15/campus/university-of-wisconsin-parkside-professor-discusses-israeli-colonialism-zionism-on-eve-of-nakba-day/ 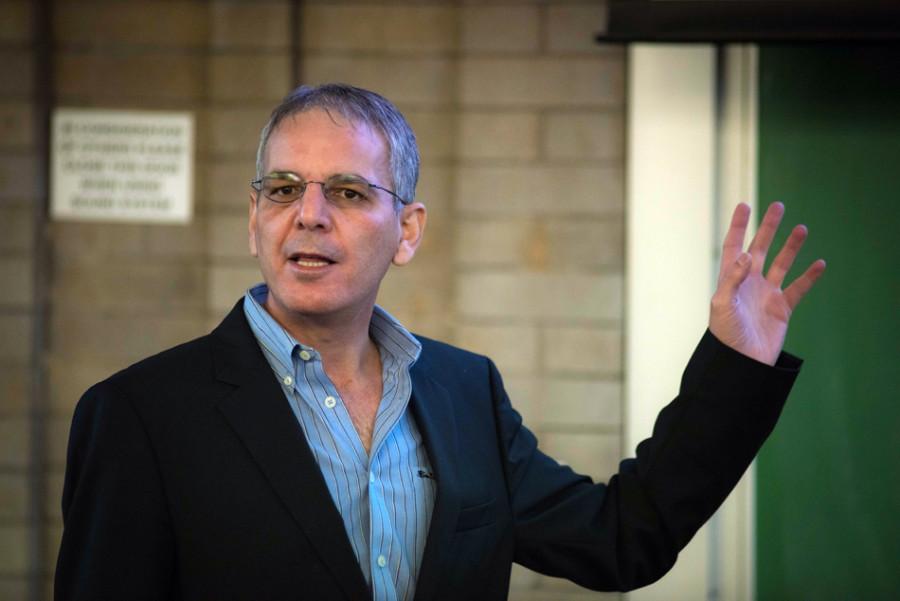 University of Wisconsin-Parkside sociology professor Seif Da’na discusses colonialism and Zionism in the Israeli-Palestinian conflict Thursday night in Swift Hall. The event was sponsored by Northwestern’s chapter of Students for Justice in Palestine as part of their Israeli Apartheid Week.

On the eve of Nakba Day, the annual day commemorating Palestinian displacement that followed Israeli independence in 1948, University of Wisconsin-Parkside sociology professor Seif Da’na said Israel is more than a settler-colonial state.

During an event held by the Northwestern chapter of Students for Justice in Palestine on Thursday evening as part of Israeli Apartheid Week, Da’na spoke about colonial Zionism in Israel and Palestine, comparing Israel’s occupation of Palestine with other colonialist movements in history, like Spanish imperialism in the Americas.

“What distinguishes a pure settlements colony is … (that) it conquers both land and labor,” he said. “If you study the history of Palestine, it would be around the Hebraization of labor … only Jewish programs, only Jewish labor. What does that mean? It means that they don’t only occupy the land but also labor.”

Da’na said that by doing this, the Israeli state is expelling Palestinians from the economy and by doing so, they are expelling them from history. This, he said, provides the foundation for ethnic cleansing.

He added many Israelis would probably be against ethnic cleansing and the expulsion of Palestinians from Israel. However, he said, much like the case of the United States, in which individual racism has diminished, but institutional racism continues to plague the country, the structural conditions of settler-colonialism continue to pose a threat to Palestinians.

“Opinion doesn’t matter as much as the structural conditions,” he said.

Da’na also spoke about how Israel was built on a war economy that is reflected on the country’s high military expenditures.

“When you have a war economy, the outcome of this economy would mean that the Arab-Israeli conflict or struggle is an outcome of the Israeli economy, not Arab aggressions,” he said. “The archives show … that Arab states were willing to negotiate and reach political agreements as far as 1949, one year after Nakba. The Israelis said no.”

He also spoke about cultural Zionism, saying that, for example, Israeli texts and novels fail to capture the correct image of Arab characters.

“If you live in a colonial condition, you cannot transcend that condition,” he said. “It shapes your world, your music, your novels, everything. That’s what cultural imperialism is.”

McCormick sophomore Omar Shanti, SJP’s media chair, said in commemoration of Nakba day, it is important to discuss the institutions of colonial Zionism that remain today.

“A benefit of comparing the Israeli-Palestinian conflict to other historical situations is that we have the benefit of hindsight,” he said. “Now we can look back at the Northern Ireland Protestant project … we can look at parts of Africa, we can look at the U.S. project with hindsight and use that to examine the situations.”

“You can have a very progressive attitude … and you can be very sympathetic with what’s happened to the Palestinians,” the Weinberg junior said. “But it is an institutional, structural problem and nobody’s really talking about how to solve that in a lot of ways.”