The Daily Northwestern • May 15, 2015 • https://dailynorthwestern.com/2015/05/15/campus/neil-degrasse-tyson-talks-science-in-popular-culture-us-role-in-scientific-research/ 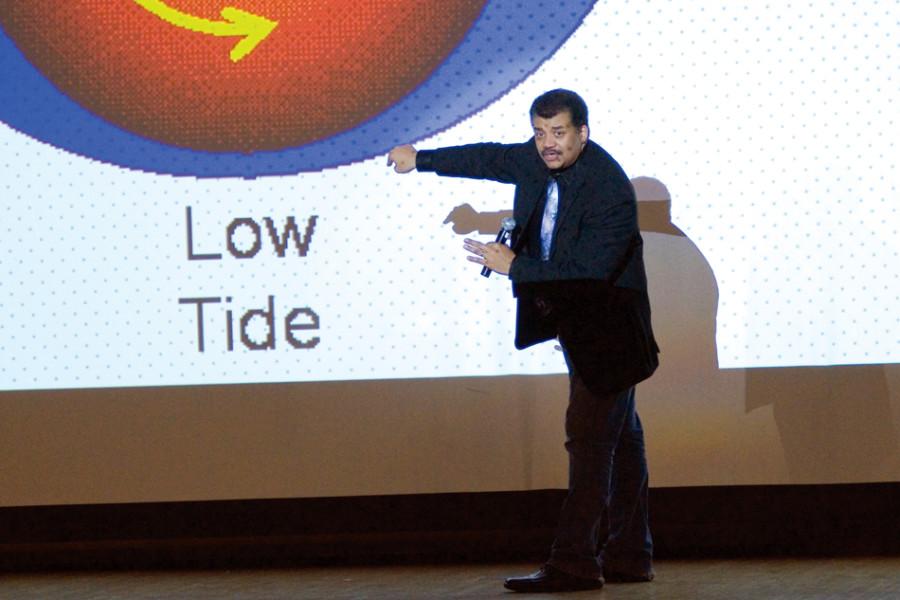 Neil deGrasse Tyson speaks about the rise of science in popular culture on Thursday night. The host of the popular TV show “Cosmos” spoke to a packed Ryan Auditorium.

Astrophysicist and author Neil deGrasse Tyson spoke Thursday night about the prominence of science in popular culture and the United States’ decreasing leadership in scientific research.

The popularity of his Emmy-winning show, “Cosmos: A Spacetime Odyssey” has indicated science is trending in the world, Tyson told a sold-out audience in Ryan Auditorium.

Tyson has received honorary doctorates from 18 American universities and is the recipient of the NASA Distinguished Public Service Medal, the highest award granted by NASA to a non-government individual. His lecture was the sixth installment in the Center for Interdisciplinary Exploration and Research in Astrophysics’ Annual Public Lecture Series.

Tyson talked about the presence of science in movies and the evolution of the portrayal of fictional scientists in film. Recent movies, such as “The Theory of Everything,” “The Imitation Game” and “Interstellar,” have featured scientists and become commercial successes, Tyson said.

“Interstellar” was filled with science, Tyson said. One of the advisers to the film, theoretical physicist Kip Thorne, participated in the making of the film and was an executive producer, Tyson said.

“All the leading characters are scientists and engineers in a blockbuster movie,” Tyson said. “That’s without precedent.”

Tyson, the fifth head of the Hayden Planetarium in New York City, talked about how the United States is falling behind in modern science discoveries due to lack of funding.  He mentioned significant achievements in other areas of the world, including Europe and Japan.

The European Organization for Nuclear Research, Tyson said, constructed the Large Hadron Collider to create, observe and study the Higgs boson, a particle that has advanced scientists’ ability to make progress in the field of particle physics. Two European scientists received the Nobel Prize in Physics in 2013 for this discovery, Tyson said.

“In Europe, not only did they discover the Higgs Boson, they might detect mini black holes that could implicate a parallel universe in extra dimensions,” Tyson said. “It’s not happening in America.”

Japanese scientists, Tyson said, won the Nobel Prize in Physics in 2014 for the discovery of blue light-emitting diodes, which have enabled bright and energy-saving white light sources.

Tyson said NASA successfully launched the Orion spacecraft in December 2014, but the completed mission is not a significant advancement for the United States.

“I said congratulations … but in fact I’m deeply disappointed that I’m not congratulating the United States for a first walking on Mars,” Tyson said.

Tyson discussed several phenomena in the universe throughout his talk, including missions to Mars, the ongoing study of Pluto and the effects of tidal forces of the moon on Earth.

However, Tyson emphasized the United States is not leading many of the studies being conducted about the universe. The initiative to establish a human settlement on Mars via the Mars One program, for example, was developed by Dutch entrepreneur Bas Lansdorp. He also said the international Rosetta mission, which is the first mission designed to orbit and land on a comet, is led by the European Space Agency.

“I know he has a quote about role models being overrated, but honestly he is a role model in science communication, and that is something I have always wanted to improve on,” Wolff said.

John Everett, assistant director of operations at CIERA, said NU students have worked on inviting Tyson to campus for a long time.

“The impetus for this started with the Society of Physics Students, who I think have been trying to get Neil here for at least seven or eight years,” he said. “They started a conversation with his agent a long time ago.”

Students in the society approached CIERA a few years ago, Everett said, but the collaboration between the two groups was not enough to provide funds for inviting Tyson to NU. Several groups contributed to bringing Tyson to campus, including the Alumnae of Northwestern and Contemporary Thought Speaker Series.

“Next time around we realized what an amazing draw this was, and so we pulled together a lot of support, with help from the Alumnae of Northwestern … and then the Contemporary Thought Speaker Series jumped in with a lot of money, and they really helped make it possible,” Everett said.