The Daily Northwestern • May 14, 2015 • https://dailynorthwestern.com/2015/05/14/sports/qa-morton-schapiro-university-president-and-fan-in-chief/ 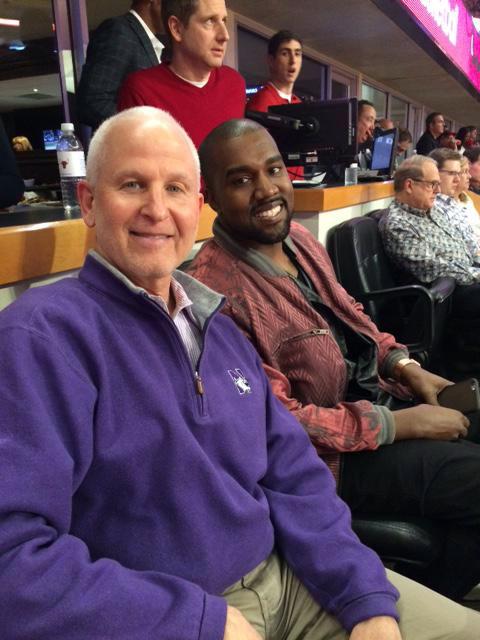 University President Morton Schapiro poses for a photo with rapper Kanye West at a Chicago Bulls game Sunday. Schapiro is an avid follower of Northwestern sports.

University President Morton Schapiro keeps a busy schedule but still finds time to cheer on Northwestern athletics and local Chicago sports teams. The Daily spoke with Schapiro about the crop of Wildcats heading to the NFL, his outlook for NU’s spring sports teams and, of course, the photo he took with rapper Kanye West at Sunday’s Chicago Bulls game.

The Daily Northwestern: What’s the story of that photo of you and Kanye West?

Morton Schapiro: So I’m sitting down next to a nice young guy … Once I figured out who (Kanye West) was, I was able to say to him … when you named your daughter, a whole bunch of students at Northwestern wrote to me and said ‘she’s gotta come to Northwestern.’ I told him that, and he said, ‘I would love that!’ … I quickly realized that this guy was really a big deal, because people were going crazy to take his picture. … Everybody is taking a picture, and I turned to him and I said ‘I’m rude for not taking a picture.’ It was my daughter who said, ‘Is it OK (to take a picture)?’ because she didn’t want to secretly do it. I didn’t understand until my son wrote to me and said, ‘Dad you don’t realize he’s smiling, and that he’s famous for not smiling in pictures.’”

The Daily: Were you surprised to see quarterback Trevor Siemian drafted by the Denver Broncos?

Schapiro: In the seventh round, you never know. I thought maybe Kyle (Prater) … but sometimes it’s better to be a free agent rather than a seventh-round pick.

We have seven who are in camps now. I was sad to see that Kain (Colter) got cut (Monday) … but we have seven guys, and obviously Ibraheim Campbell is going to stick. … I was in Qatar or India last week, and I was trying to follow (the draft) but it was hard because the time difference was so late. But I was really glad when he got drafted, and pleasantly surprised that Trevor got drafted. But I really hope that Kyle Prater takes off.

The Daily: Any thoughts on who will have the best pro career?

Schapiro: Well (Campbell) is a great player, nose for the ball, he’s great with interceptions. … He’s also a great, ferocious tackler. He gets his arms around you and you’re going down. He’s a hitter. … I really think Kyle Prater is going to be a pro, I really do. He’s a great young man — you can’t teach height, he’s got really good, enormous hands, he’s really smart, and he just blocks ferociously. He’s a great talent.

The Daily: What’s your prediction for the lacrosse game this Sunday?

Schapiro: I think we’re going to win. … We got it out of our system. We lost to (Maryland) 16-5 the first time, so we’re ready for them. … And women’s golf, they were 11th after the first day (at the NCAA Raleigh Regional) and they finished second. So we’re sometimes a little slow to start, but man that team has been fantastic.  … And I’m really thrilled about softball. I was really worried about that Purdue game we won 3-0. We all knew we had to win that game in order to get our ticket punched for the NCAAs, and we did. … I think we’re going to win the Regional, I think women’s golf is going to finish top five, and I think that we’re going to beat Maryland, so we’ll make it 11 Final Fours in a row. And then we’re going to use that, with this young team of freshmen, to propel us to a national championship. And softball, I think we can make the Women’s College World Series again.